Well, I hadn’t realized I’d hung on to this post quite so long before hitting publish… In my defense, I was waiting on trying a few more items and squeezing them in, but I’ve now decided to do a separate post later for those, so here are some long overdue product reviews (most are from last summer, some are from the fall).

I finally got around to trying two of Ben & Jerry’s vegan ice cream flavors: the Chunky Monkey and the P.B. & Cookies. The Chunky Monkey tastes just like I remembered (from before I became lactose-intolerant), so I loved it, even though it’s not the type of flavor I normally gravitate toward these days. The P.B. & Cookies was my favorite, though! I love ribbons of peanut butter in ice cream, and this worked really well with the Oreo-type cookies. To be honest, if I hadn’t known these were made with almond milk, I wouldn’t have guessed that they were vegan. Good job, Ben & Jerry’s! 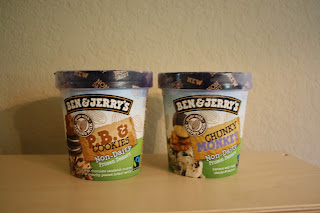 I also tried an Oikos frozen yogurt, made by Dannon, in Cookies and Cream flavor. For some reason, I can’t find this on their website, so I’m really hoping they didn’t just stop making it... I absolutely loved the Cookies and Cream! And sure enough, since I can eat Oikos yogurt just fine, I didn’t need Lactaid for this. That being said, even if they stop making it, it’s not the end of the world because Lactaid itself is broadening its repertoire: it has delicious Cookies & Cream ice cream, as well as other flavors like mint chocolate, butter pecan, berry chocolate crumble, and salted caramel chip (which looks like it’s right up my alley). It used to be that in the US, one could only get vanilla ice cream that was lactose-free, but this is as much choice as Chapman’s offers in Canada! 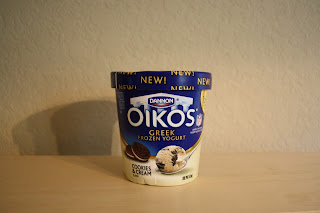 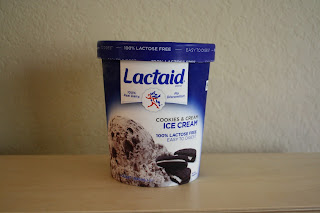 While in Montreal, we tried a few of Gibiers Canabec’s game burgers. We tried the duck, kangaroo and deer meat burgers, though they also have wapiti, bison and a mix of deer and boar. My beef with them, if you’ll pardon the easy pun, is that I used a meat thermometer to cook them until they had reached 165 °F throughout (as recommended on the package), but this made them very dry. I don’t know whether any other consumers have run into the same problem – maybe most people like their burgers pink in the center, but I’ve read too many horrible tales about bacteria in ground meat to let that happen. I did hear that Canards du Lac Brome is now selling ground duck meat, though, so maybe there is a way to avoid that if one makes one’s own burgers? 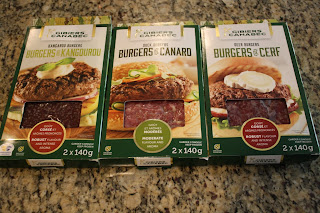 I also tried two local (Montreal/Quebec) colas: 1642 Cola and Bec Cola. They are both sweetened with natural cane sugar and maple syrup, but my personal preference was for Bec Cola. Not only was the maple taste more pronounced (whereas 1642 Cola, which I really wanted to love, was more generic), but it also kept its fizz a bit longer. 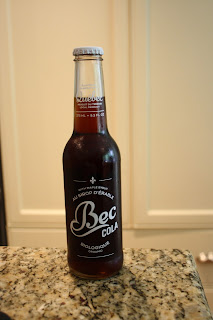 My favorite drink discovery, though, was a company called La Rhubarbelle. I’d heard of them a few years ago, but only got to try their products last summer, after ordering them online (as I couldn’t find them even in stores named on the store locator portion of the website). I tried La Rosée de Rhubarbe (which is a not-too-sweet rhubarb juice) and Le Pétillant de Rhubarbe (same, but sparkling). If I remember correctly, rhubarb is the first ingredient, followed by water (or sparkling water) and then sugar. I loved the clean taste of rhubarb in both drinks, though I don’t think I would like the third product they make, L’Éclat de Rhubarbe, as that is even more acidic. I really liked the presentation, too: the drinks come in wine-bottle-sized containers, even though they’re not alcoholic, and I can easily see taking a few of these to a potluck. The only downside in my case was that the order was shipped to my billing address instead of my shipping address (which were different at the time), so that was inconvenient but not unsurmountable. I’m seriously considering ordering a bunch of these every time I go back to Quebec! (Except, you know, it comes out to roughly $10 per bottle, so it’s certainly not cheap.) 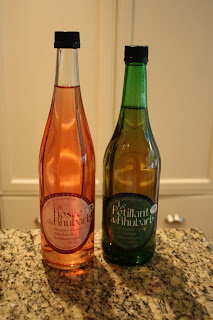 When I got back to Texas, I found a juice that I thought I would like, Cawston Press’s apple and rhubarb juice, but that was a disappointment. It tasted overwhelmingly of apple and just barely of rhubarb, so it won’t replace La Rhubarbelle for me. That being said, I’ll try their rhubarb and apple sparkling drink if I ever see it, as the ratios of rhubarb juice to apple juice are very different. 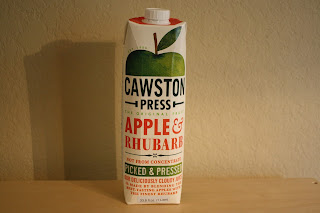 Last summer, we saw some Gusta sausages at Avril, too, so I couldn’t resist buying them. I first heard of Gusta Foods during their crowd-funding effort to open a store at Jean-Talon Market, which is now a reality. They make vegan sausages, vegan cheeses and will be adding vegan spreads to their line-up. We had the Italian sausage, which has bell peppers, tomatoes and herbs, and it was really good. (Allergen info: contains wheat, soy and mustard.) I’d also love to try their cheeses, which are solid when cold but apparently melt beautifully; those are made with cashew cream. 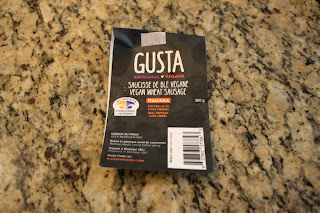 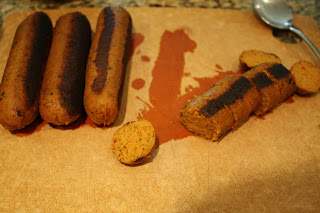 I bought some Chocadel, which I’d been wanting to try because it’s raw chocolate. I tried the dark chocolate with maple flakes. It was good, but not great. Honestly, the main drawback for me was that it’s sold in a somewhat thick tablet without any scoring lines to break off smaller pieces of it, so it was messy to eat, and since I tend to eat my chocolate a few pieces at a time while watching TV and knitting, this is actually a consideration. 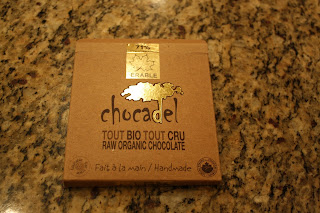 The chocolate I loved was Kaoka, specifically the dark chocolate with fleur de sel. Kaoka is a French company that makes organic, fair trade chocolate; I only tried that one flavor, but I’d make a beeline right for that one next time I see a selection! (Allergen info: may contain nuts, gluten, and milk, though there’s no lactose.) 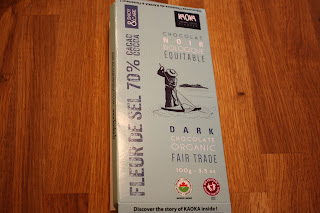 Finally, after my hipster apples, here are some hipster grapes. These are Moon Drops, an elongated, dark purple grape that is sweet and juicy. They are available from August to October, and I think they’ve become our favorite grape (though the Engineer still loves Cotton Candy grapes). It appears they would be available at Loblaws in Quebec, too! 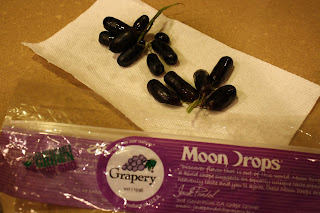 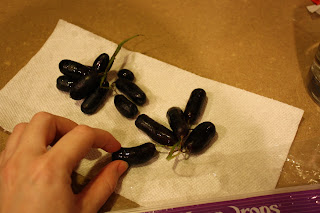 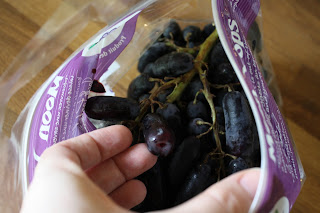