This pork roast is from the same promotional magazine as the chicken and sausage white bean pot.

I served it alongside broccoli Veggie Tots, which I was curious about – they’re okay, but not great. The pork though, was delicious – the Engineer called it exceptionally good.

I forgot I had to marinate the pork loin overnight, so I skipped that step, but it turns out that it isn’t necessary if you can’t find a “natural pork roast” (whatever that means), according to Better Homes and Gardens. Mine turned out fine. For the fresh breadcrumbs, I was lucky enough to have some left in the freezer from a previous recipe, but to make your own, just pulse the soft part of the bread in the food processor until it is reduced to crumbs, then let stale overnight (or bake for 10 minutes in a 300 °F-oven, stirring once or twice). If you’re not going to make your own, I would recommend panko over traditional bread crumbs.

Note that I used the leftover processed bacon in this recipe.

For brine, in a very large bowl dissolve salt and sugar in 8 cups cold water. Transfer pork to brine, making sure to submerge it fully. Cover and refrigerate overnight, or up to 2 days.

Remove loin from brine and blot dry with paper towels. In a nonstick skillet heat oil, then brown roast on all sides, about 10 minutes. Set aside for 5 to 30 minutes to cool slightly.

In a food processor, purée uncooked bacon to a smooth paste. (This amount of bacon is necessary for blades to process. Use the remaining puree to make appetizers: spread on baguette slices then broil until golden, for example.) Transfer half the bacon to a bowl. Stir in apricot preserves, chopped garlic, and 2 teaspoons of the chopped rosemary.

Position oven rack in lowest position. Preheat oven to 425 °F. Place cooled pork loin on waxed paper. Spread with bacon mixture. In a separate bowl combine the bread crumbs, parsley, remaining rosemary, ½ teaspoon kosher salt, a few grinds of black pepper, and the melted butter. Toss well to mix. Press an even layer of the crumb mixture on the roast (except the ends), applying enough pressure for the crumbs to adhere to the bacon layer.

Transfer roast to a wire rack in a foil lined baking pan or roasting pan. Roast for 15 minutes. Reduce oven temperature to 350 °F. Roast for 45 minutes more or until an instant read thermometer registers 145 °F. (If crust begins to brown too deeply, tent roast with foil.) Remove roast from oven, tent with foil, and allow to rest for 15 minutes in a warm place (or not). Temperature of roast will rise approximately 10 °F as it stands. 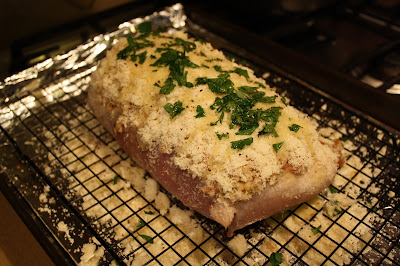 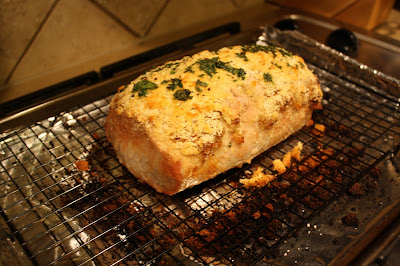 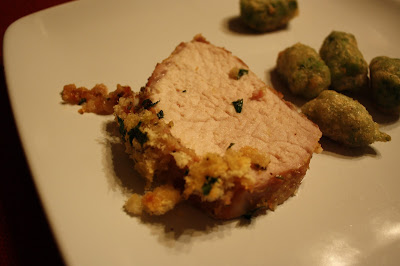