I’ll start this with an a parte about the last layer cake I made, in April. It was a coconut layer cake in Bon Appétit. The cake was absolutely beautiful in the magazine (of course!), but reality turned out very differently. Here’s the running commentary in my notes: “My cakes didn’t rise much at all, so next time, I would switch pans from upper to lower rack halfway through baking (as it was, I moved the lowest cakes to the top rack for an extra 5 minutes). I won’t split them, obviously. [At this point, I tried to unmold them.] Oh, for God’s sake, line the pans with paper next time! GAH! [I don’t believe I’ve ever had cakes come out of the pan in this many pieces.] I’m not soaking the layers in alcohol, nor am I adding alcohol to the frosting because it would be too liquid. Never mind, the frosting is an absolute disaster anyway. This whole cake is a disgrace.” Really, I thought I’d get better results with a recipe from Bon Appétit, but I was wrong. Thankfully, it takes more than one dud of a recipe to discourage me from layer cakes!

I finally, finally got the opportunity to make Maya Angelou’s caramel cake, from Hallelujah! The Welcome Table: A Lifetime of Memories with Recipes (there’s a great story to go with this cake, obviously, but I can’t reprint it here without violating copyrights). The recipe was also published on Oprah.com. It calls for cream, so I waited to get lactose-free cream in Quebec. However, as it turned out, that didn’t really matter because the main flavor profile in the frosting is browned butter – not lactose-free. (Vegan browned butter is iffy at best, though I hear it might be possible to make by adding soy milk powder to melted vegan margarine. I haven’t had a chance to try it.) That being said, the Lactaid was totally worth it for this! I could eat the frosting by the spoonful (and I sort of did). 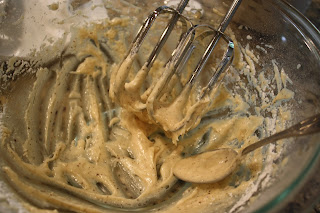 Note that I recommend doubling the amount of frosting below, because otherwise you have about enough for the middle and top of the cake, but not the sides (unless you’re going for the naked cake look). Moreover, I found the caramel to be odd. Normally, I make caramel by mixing sugar and water, then not stirring until it’s amber in color, then I stir and add cream or butter or salt or whatever else. This recipe called for stirring just sugar over heat until it melts, then adding water. I thought it was odd, but who am I to criticize Maya Angelou’s grandmother’s recipe, right? So I made it the way I was instructed. That being said, next time I would make it the way I’m more used to, because it tastes better to me and the consistency is more viscous than watery, which is part of what makes a good caramel, in my opinion. Plus, since the recipe for caramel syrup makes a lot more than you need for the cake, you’ll appreciate having leftovers that taste extra good! We shared the cake with friends of ours, so there wasn’t too much lactose to deal with for me. :)

And on another side note (I promise I’ll get to the recipe soon, and it’s worth the wait): remember how surprised I was that Bergeron had the balls to write 100% soy on their margarine when it was actually something like 95% soy and there was lactose-full whey in the remainder? Well, S!gnal margarine takes the cake (no pun intended). Look at this label: the front clearly say 100% soybean oil, but on the list of ingredients, suddenly it’s down to 80%, and there’s whey in that too! We need better labelling laws! I did find Earth Balance sticks later, at Avril (a store that I love, possibly the closest thing to a Whole Foods I’ve seen anywhere), where it was on sale at $4.99 a package – more in line with the American prices, and certainly more affordable than the $8.49 IGA charges! 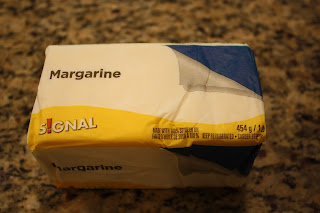 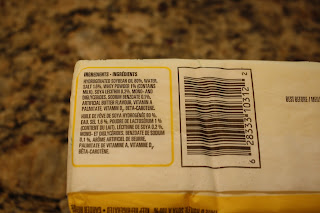 In separate medium mixing bowl, beat eggs about 3 minutes, until foamy. Add remaining sugar, and beat until there is a fine spongy foam. Stir into cake batter until blended. Divide batter between cake pans. Bake for about 25 minutes. Remove pans from oven. Gently press center of cake with forefinger. Cake should spring back when finger is removed. If it doesn't, return to oven for 10 minutes (5 minutes did the trick for me). Cool in pans for 10 minutes. Turn out onto rack and remove wax paper. Let cakes cool to room temperature before frosting.

Heat sugar in heavy skillet over low heat. Stir constantly until melted to a brown liquid. When it bubbles over entire surface, remove from heat. Slowly add boiling water, stirring constantly. Pour into container and cool.

For the caramel frosting (I had to double this recipe)
6 Tbsp. (¾ stick) butter
one 8-oz. package confectioner's sugar
4 Tbsp. lactose-free (or heavy) cream
1 ½ tsp. vanilla extract
a pinch of salt

Brown butter in heavy pot over medium heat—be vigilant or it will burn. Allow butter to cool. In large mixing bowl, add confectioner's sugar, cream, vanilla extract and salt to butter, and beat until smooth. If frosting is too stiff, add a tablespoon of half-and-half or full cream to thin. 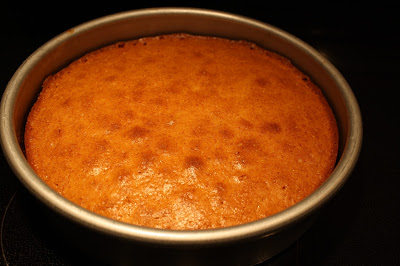 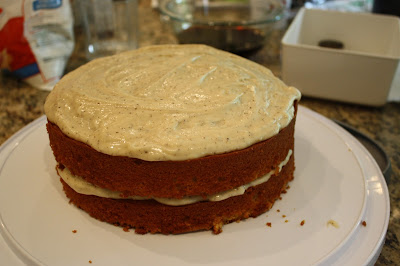 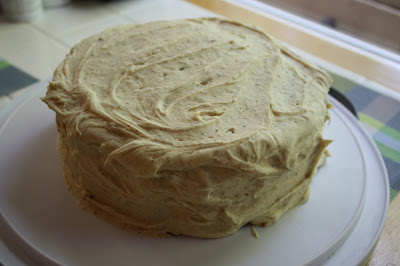 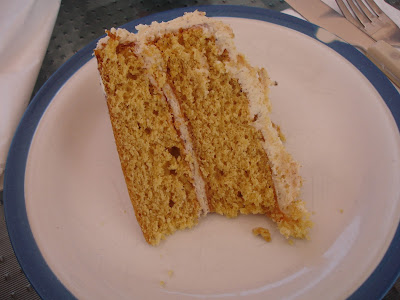 Thank you for sharing the post.Visit us @ Best ias academy in chennai - SmartLeaders

Superb blog post, I have book marked this internet site so ideally I’ll see much more on this subject in the foreseeable future!