I tried baking with seasonal fruit for breakfast, but with mixed results. Rhubarb muffins were good, but there was a bit too much cinnamon, and the pieces of rhubarb exposed to air quickly became leathery-tough. Blueberry muffins came out all wrong – I think there just isn’t enough flour in the recipe. The best breakfast I made so far didn’t involve fruit at all, actually. It was these ginger scones with chocolate chunks.

Surprisingly enough, I didn’t have baking powder on hand and failed to notice until I had actually started the recipe. So I googled how to substitute for it, and I ended up using 1 ½ tsp. baking soda plus 1 Tbsp. cream of tartar. I also omitted the cinnamon from these. They were really good, though with Baker’s chocolate, there was that awkward moment when my breakfast wanted me to do math with fractions first thing in the morning… 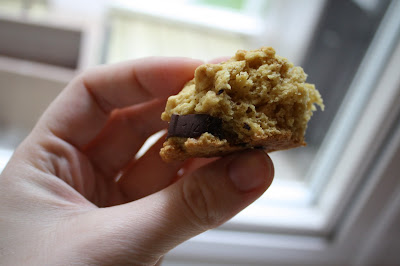 Preheat the oven to 400 °F. Lightly grease a baking sheet or cover it with parchment paper or a silpat.

In a small bowl, mix together the vegetable oil, milk, and vanilla extract. Add that to the dry ingredients and stir quickly until everything is just moistened (a few streaks of flour are fine). Gently fold in the chocolate chunks.

Using an ice cream scoop or a ¼-cup dry measuring cup, portion out the dough and place it onto the prepared baking sheet (I got a total of 14). Dust them with a few pinches of turbinado sugar (I think I forgot this step).

Bake for 15 minutes. These keep well at room temperature in an air-tight container for a few days, or you can freeze them. 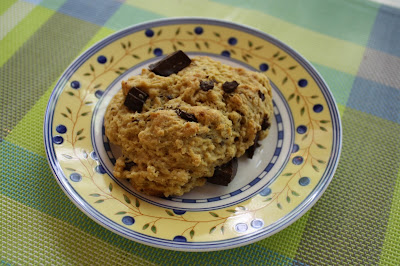 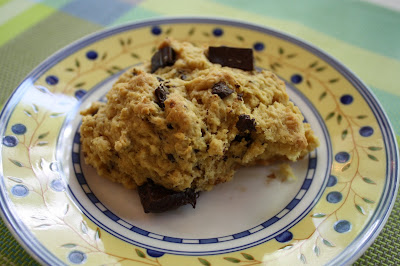