I had made a recipe for 40-clove garlic chicken once, years ago, and believe it or not, it was actually bland. (Crazy, right? Obviously, the cloves weren’t raw, but still.) I decided to try it again, though, when I saw this recipe online. The original recipe calls for pieces of chicken with the skin, but I chose to use cut-up skinless boneless chicken breasts. As it turns out, this dish was much tastier than my previous one, and we all enjoyed it very much! It’s not very photogenic, but it’s good, homey food.

Pat the chicken and skin dry with paper towels and season with 1 teaspoon of salt and ½ teaspoon of pepper (or to taste).

Heat the oil in a dutch oven or oven-safe skillet just until you start to see wisps of smoke. Place chicken in skillet skin-side down, and cook until the skin is well browned, about 7-10 minutes.

Transfer the chicken to a plate (don’t try to pry the chicken off from the pan, if it is well browned, it will loosen by itself) skin-side up and set aside. Remove all the fat (the fat from the chicken will have rendered out and add to the oil you began with) until you’re left with just 1 tablespoon of oil and reduce the heat to medium-low. Add the garlic and cook until evenly browned for about 1 minute.

Cover potatoes with salted cold water in a large saucepan and simmer, uncovered, for 20 to 30 minutes (I prefer to boil mine, and it’s faster, too).

While potatoes are simmering, bring cream, butter, salt, and pepper to a simmer in a small saucepan. Remove from heat and keep warm, covered.

Drain potatoes in a colander and cool slightly.

Stir spinach into warm cream, tossing to coat, and when slightly wilted (after about 1 minute), immediately add to potatoes. Mash potatoes and spinach until almost smooth. Season to taste and keep warm.

Once the chicken is ready, place the pieces on a serving dish. Mash the garlic in the dutch oven and stir in the unsalted butter. There will be more than enough heat to melt it and make the sauce glossy. Serve the chicken with the sauce and the spinach mashed potatoes. 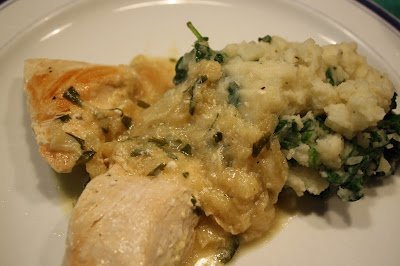