I recently tried two recipes for vegan chocolate chip cookies; unlike last summer’s cookies, these don’t call for egg replacers, they were just conceived without eggs in the first place. What they had in common was mixing oil with sugar until you get a caramel-like consistency, which was important for the structure of the cookie (and that’s the reason why I don’t recommend substituting applesauce here). The first recipe was from Post-Punk Kitchen; the cookies were good, though I prefer the ones I normally make, so I’m not posting the recipe here. 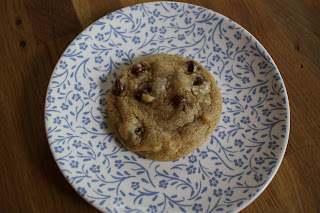 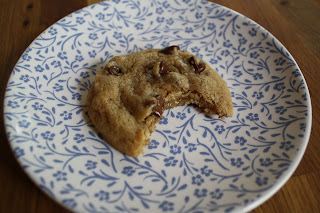 The second recipe, though, from Sift & Whisk, called for a small amount of oats as well as chopped chocolate instead of chips; the result was a darker, tastier cookie. The dough was a bit dry and crumbly as I was working with it, and I still thought these were not my best cookies, but the Engineer loved them. That being said, I didn’t want to buy nut oils just for this, so I used canola oil instead of peanut oil, and olive oil instead of macadamia oil. Obviously this affected the taste, but these were good, and nut-free. They actually reminded me a bit of my Neiman-Marcus cookies, which I haven’t made since the 36-hour cookies came into my life 5 years ago – I’ll have to remedy that this summer.

And as I was typing up this post, I realized that I had another recipe for olive oil chocolate chip cookies, so I tried that one too, but even though they tasted fine, they spread out way too much. I also think there was too much sugar compared with the flour. So all this to say, this vegan Sift& Whisk recipe was the best of the bunch, and here it is below.

Spread the oats on a baking sheet and toast in a 350 °F oven for 10-15 minutes, until fragrant. Allow to cool, then grind the oats into a fine powder in a spice grinder or blender. (Since this is such a small amount of oats, I used my spice grinder instead of the food processor, and I was amazed at how fast and efficient it was at pulverizing the oats!)

In a large bowl, whisk together oat flour, all-purpose flour, baking powder, baking soda, and salt. Add the chopped chocolate to the flour mixture and toss to coat.

In the bowl of a stand mixer, combine the sugars. Break up any lumps in the muscovado (or brown) sugar by running the mixer on low for a few seconds. Use your fingers or spoon to break up any lumps the mixer missed. Add both oils and the water. Mix on medium-high speed until smooth and fully combined, about 2 minutes.

Turn the mixer speed to low, add the chocolate and flour mixture, and mix until just combined. Remove the bowl from the stand mixer and scrape down the bowl just to make sure everything is combined evenly, but don’t overmix the dough. Cover the bowl with plastic wrap and refrigerate the dough for at least 12 hours (you can keep it refrigerated for a week, easily).

Preheat the oven to 350 °F. Line two half-sheet baking pans with silicone baking mats or parchment paper (I actually like baking them one sheet at a time, as needed). Remove the dough from the refrigerator and scoop the dough into 2-inch mounds, eight on each baking sheet (stagger the dough mounds so they don't spread into each other; my cookies were slightly smaller and I fit 12 per pan, for 2 pans total). Freeze the cookie dough mounds for 10 minutes. (If your freezer isn't very large, you can put all the dough mounds on one pan, freeze them, and then redistribute the frozen dough mounds between the two baking sheets before baking.)

Remove the cookie dough from the freezer and sprinkle the tops of the dough with sea salt. Bake for 13-15 minutes (12 minutes for me), rotating the pans from front to back and top to bottom halfway through baking. The cookies are done when the edges are set and the tops are still a tiny bit shiny. Cool the cookies on the pan for 3 minutes, then transfer the cookies directly to a wire rack to cool completely. 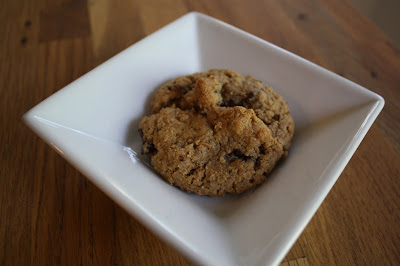 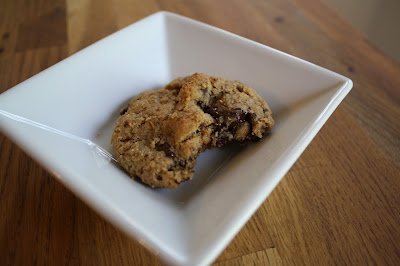