I realize I may have already lost some of you with that title, but if you’re still with me, you’re in for a treat. The inspiration for these cupcakes is Itsi Bitsi in Montreal, where Dear Sister bought assorted flavors for my bachelorette party (8 years ago already). The only flavor I remember was chocolate curry! It was unusual enough at the time that I’d never considered curry in desserts, though I’ve now seen more recipes along those lines, and I’ve also enjoyed “savory” spices mixed with chocolate in other dishes. So over the years, I tried to recreate these cupcakes, or at least come up with something that I’d make again, and I think I’ve got it! To be clear, this isn’t Itsi Bitsi’s recipe, and I don’t think the cupcakes even look similar (maybe theirs had a curry-yellow buttercream frosting, though I can’t remember clearly now). It took some tweaking: I started with 1 teaspoon of curry in the cupcakes, but it wasn’t noticeable at all then. This recipe calls for 2 tablespoons, which makes them almost savory. I only use mild curry, but even then, be warned that the flavor deepens over time, so the cupcakes will have a more pronounced curry taste if you eat them 2 days later (when freshly baked, it was certainly not overpowering, but after 2 days, it got almost spicy). For the base of the chocolate cake, I adapted my friend Jen’s excellent recipe for chocolate cream cupcakes (which is actually from America’s Test Kitchen). The recipe for the base of the frosting is from my favorite chocolate cake, from Minimalist Baker. These were such a hit that to wash them down, the Engineer used up in 2 days the amount of milk that normally lasts him 7 days… Be warned!

Bake until a toothpick inserted into a cupcake comes out with few dry crumbs attached, 18 to 22 minutes. Cool cupcakes in tin 10 minutes, then turn out onto wire rack and cool completely.

Once the cupcakes have cooled, prepare frosting by beating together all ingredients until light and fluffy, adding the powdered sugar in small amounts until you reach your desired consistency and sweetness. If it becomes too thick, add more milk. If it's too thin, add more cocoa powder or powdered sugar. With the amounts indicated above, it was great! Not too sweet, and with only a subtle curry taste. 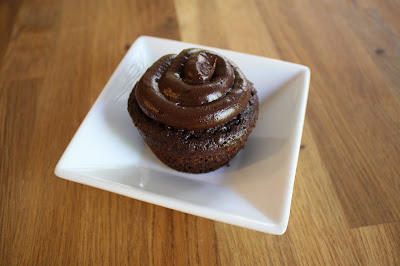 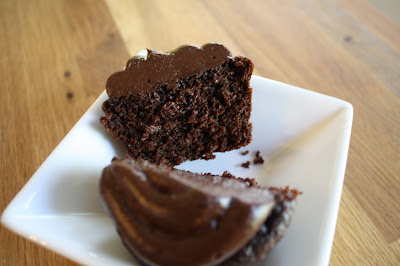