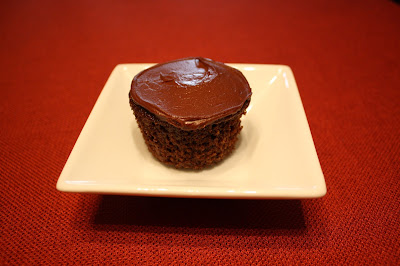 I was curious to try this recipe, since it sounds so much more nutritious than most chocolate cupcake recipes out there! The cupcakes were, in fact, very good, but I’m not sure they were that special. Whole wheat flour has the same amount of fiber as the white whole wheat flour I use for the vast majority of my baking (4 g. per ¼ cup serving), and at this point, avocado purée in a chocolate cake isn’t really new for anyone, I think. There were visible flecks of avocado in the crumb of the chocolate cupcake, but I couldn’t taste it. I also made the coconut chocolate ganache to ice the cupcakes, and that was really good!

Preheat oven to 350 °F. Line a muffin tin with 12 paper liners (I felt like the paper liners didn’t come off the cupcakes cleanly, but I admit I’m not sure whether greasing the tin instead would have been enough).

In a medium bowl, whisk together the flour, cocoa, baking soda, baking powder and salt. Set aside.

Whisk together soy milk and vinegar and set aside (it will curdle).

In a food processor or blender, purée avocado with a little bit of the soy milk mixture until smooth.

Add sugar, oil, and vanilla to the rest of the soy milk mixture and beat until foamy (a whisk will suffice here). Add the avocado mixture and mix until combined. Add dry ingredients in two batches, and mix with a wooden spoon until combined. Fill cupcake liners about 2/3 to ¾ of the way.

Bake 18-22 minutes, depending on your oven, until a toothpick inserted in the center comes out clean. (Ideally, transfer them out of the pan about 10 minutes after you take them out of the oven so they don't get soggy.)

Heat coconut milk in a saucepan until it just simmers. Remove from heat and stir vanilla and Whisk until smooth. Chill until it gets firm (a few hours). At this point, I beat the ganache and smeared it onto the cupcakes; it would have needed to be a bit former to be piped on, and you could also use it as a glaze if you don’t chill it. 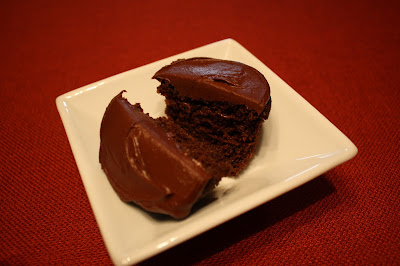