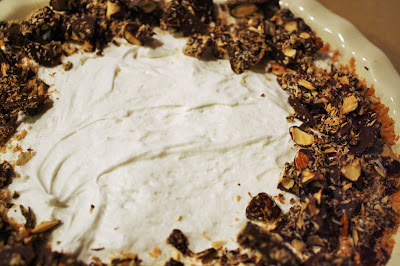 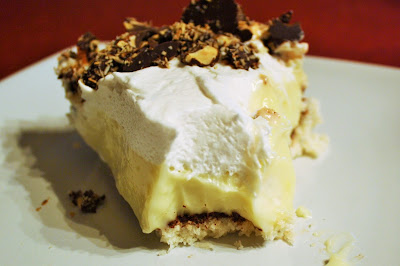 I made a coconut cream pie from a recipe in Bon Appétit that was just fantastic! The crust is made of coconut (instead of the usual cookie crumbs), and I replaced the whipped cream topping with CocoWhip, a vegan coconut topping made by So Delicious and sold in the frozen section. It was the first time I tried that topping, and this was the perfect recipe for it (I still have some left in the tub, too). The pie itself was wonderful; the crust held together well and I loved its texture, which contrasted pleasantly with the creamy coconut filling. The chocolate-covered almond topping was a great touch, too! I wouldn’t have thought of it as a garnish, and I wasn’t sure I’d even like it, but it turned out to be one of my favorite things in this dessert. (Note that as I cut the pie, the whipped topping smeared a bit on the sides of each piece; I didn’t really mind, but I did clean it up before taking the picture. If you’re serving this for guests, make sure you bring the finished pie on the table before you start slicing it; that way, everyone will be impressed already before getting their slice.)

For the crust
Preheat oven to 325 °F. Lightly coat a 9" pie pan with nonstick spray.

Mix egg white, coconut, sugar, butter, and salt with a rubber spatula in a large bowl until evenly combined and the consistency of a stiff paste. Using your hands, press mixture evenly onto bottom and up sides of pie pan. Bake until edges are golden brown and bottom is set and just barely golden, 15–20 minutes. Transfer pie pan to a wire rack (leave oven on to toast almonds and coconut) and let crust cool. Brush crust with melted chocolate.

For the custard and assembly
Bring lime zest, milk, and coconut milk to a simmer in a medium saucepan. Cover and let sit off heat 30 minutes.

Stir almonds into melted chocolate in a small bowl. Spread in an even layer on a sheet of parchment paper. Sprinkle toasted coconut over chocolate almonds and chill until firm, 8–10 minutes. Coarsely chop, then cover and chill.

Scrape custard into crust and press a piece of plastic wrap against surface. Chill until set, about 2 hours. (The pie can be made ahead up to this point and will keep, chilled, for up to a few days.)

Just before serving, spoon whipped topping over custard, leaving about a 1" border, and swirl decoratively. Scatter chocolate-almond mixture around perimeter. 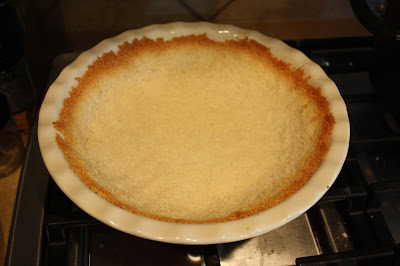 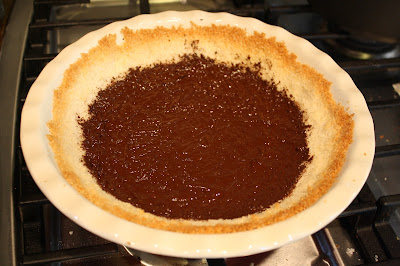 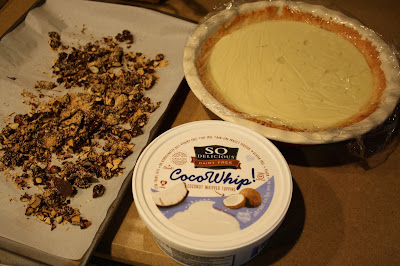 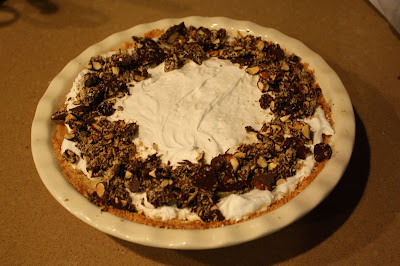 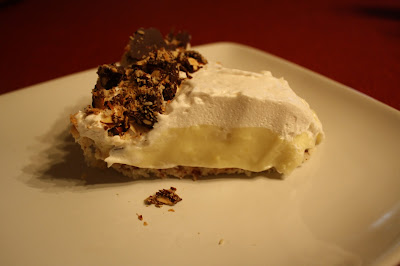