I had a lot of bananas in my freezer, probably because the Little Prince used to love them, but has snubbed them lately, so I had to freeze them when they got overripe. I tried two muffin recipes that were very similar: oat flakes, Greek yogurt and mashed bananas in the food processor, along with a handful of chocolate chips. The first one I wasn’t crazy about, because I felt like the oat flakes didn’t get grinded properly, and I was left with something that was not a muffin but wasn’t oatmeal, either. I tried a variation where the oat flakes are ground to flour before the other ingredients are added, but the result was basically the same. Neither muffin achieved the moist, fluffy crumb that was promised, the chocolate chips sank to the bottom, and they’re by no means bad, but not as enjoyable as I would have wanted. 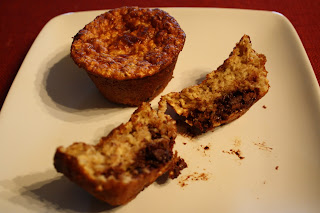 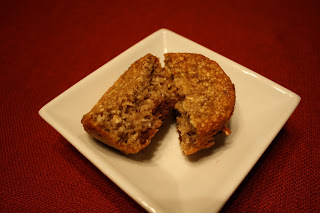 Enter the baked oatmeal single: a muffin-sized portion of baked oatmeal, hearty and, perhaps most importantly, not masquerading as something with a fluffy crumb. This is exactly what it looks like, and the chocolate chips are pretty evenly spread out. This recipe is a keeper. It freezes well, too, so don’t worry about leftovers.

Combine the oats, brown sugar, baking powder and salt in a large bowl and stir until thoroughly mixed.

In a separate bowl, whisk together the egg whites, egg, mashed banana, milk and vanilla. Add to the dry ingredients and stir until blended together. Mix in chocolate chips.

Spoon the oatmeal mixture evenly between the prepared muffin cups. Bake uncovered for 18 to 22 minutes or until oatmeal is lightly browned and a toothpick inserted into the middle comes out clean. 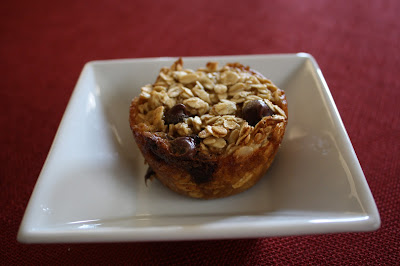 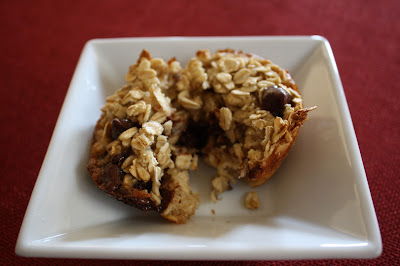