In defense of flourless chocolate cake

So, the Engineer and I had a profound disagreement recently. Not an argument, mind you, just a realization that we have completely different viewpoints on flourless chocolate cake. I view it as a dessert in and of itself, and I absolutely love it. (As a matter of fact, when I googled the term, I had only gotten so far as “flourl” when Google completed it for me as its only suggestion and promptly gave me links to over a million recipes. This would suggest that I’m not the only fan of flourless chocolate cakes, to say the least.) The Engineer, however, places it on the same continuum as a “regular” (layer) chocolate cake, but always prefers the latter and sees the flourless version as inherently inferior. He would always prefer a layer cake, whereas to me, it really depends what kind of mood I’m in. (I’d always go for a layer cake on a birthday, for example, but I see a good flourless chocolate cake as much more decadent. The same goes for molten chocolate cake, while we’re at it.) So when I made this flourless chocolate cake from Real Simple, he didn’t understand why. After all, I’ve already got a very good recipe for flourless chocolate cake that, in his mind, I could serve to our relatives who are gluten-intolerant. He didn’t see the point in eating any more of it. But I’m not making it to serve it to them, I just want some because that’s what I feel like eating!

In any event, what I liked about this recipe is that it uses mostly prunes as a sweetener (and extra fiber), making it more nutritious than my regular recipe, albeit less rich. I didn’t feel guilty about feeding some to the Little Prince, even though I don’t want to give him too much sugar. If you’re a fan of flourless chocolate cakes, you’ll like this one. If you’re not a fan of flourless chocolate cakes, you might want to reconsider your priorities.

Soak the prunes in boiling water until very soft, 20 to 30 minutes.

Preheat oven to 325 °F. Grease a 9-inch springform pan and dust with cocoa, tapping out the excess.

Drain the prunes and transfer to a food processor. Process until finely chopped, 10 to 15 seconds.

Place the chocolate and margarine in a large microwave-safe bowl. Microwave on high in 30-second intervals, stirring in between each, until melted and smooth. (I did this in a double boiler.) Add the prunes, egg yolks, vanilla, and salt and whisk to combine.

Pour the mixture into the prepared pan. Bake until the cake is set around the edges but still slightly soft in the middle, 40 to 45 minutes. Let cool. 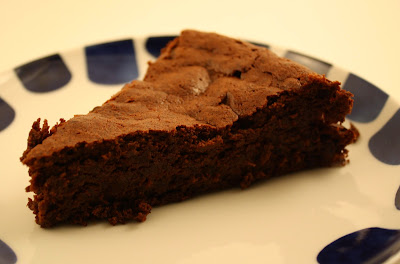