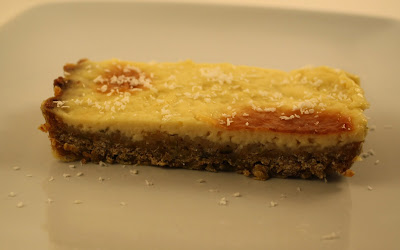 Yeah, so I totally missed my bloggaversary. When February 4th rolled around, I knew the date sounded familiar, but I couldn’t put my finger on it. A look at my calendar revealed nothing. Well, too bad. It’s not like I had a special post or giveaway planned or anything – maybe I’ll do that for the 10th anniversary?

In any event, here’s a coconut lime tart that I’ve been meaning to tell you about. It’s entirely dairy-free, too, and I find it particularly nice to eat such lime tarts! We all really enjoyed it. The lime and coconut go well together, and it wasn’t too sweet, which was nice. The recipe is from the book Sprouted Kitchen, by Sara Forte. I made it in a 14”x5” tart pan; I believe you could adapt the recipe to a 9” round tart pan, too, though I haven’t tried it.

For the garnish
toasted shredded coconut

Line the bottom of a 14"x5" tart pan with a removable bottom with parchment paper.

Combine oats, spelt flour, and pistachios in a food processor and pulse to create a coarse flour. Add the honey, coconut oil, and salt and pulse a few times to combine. Add the water 1 tablespoon at a time and pulse until mixture just begins to hold together. Immediately press the crust into the bottom and just barely up the sides of the prepared tart pan in a thin, even layer. Put in the fridge to chill for at least 1 hour, and up to 5 hours.

Preheat the oven to 375 °F. Pierce the bottom of the crust with a fork a few times and bake just until toasty, 12-14 minutes. Set aside and let cool completely.

Turn the oven down to 325 °F. To make the filling, put the coconut milk in a small saucepan and bring to a simmer. Simmer for 5 minutes. Turn off the heat, then stir in the sugar and lime zest and sift in the flour. After the mixture has cooled slightly, whisk in the lime juice, egg, egg yolk, salt, and vanilla until completely combined. Let cool to room temperature. Strain the mixture through s fine-mesh strainer and pour into the crust (I had a little overflow and should have held back a few tablespoons). Bake until the center of the filling is just set, 23-25 minutes (I actually baked mine a total of 50 minutes because of how jiggly the middle still was). Remove from the oven and let cool to room temperature, garnish with toasted coconut, then chill in the fridge for at least 20 minutes before serving. 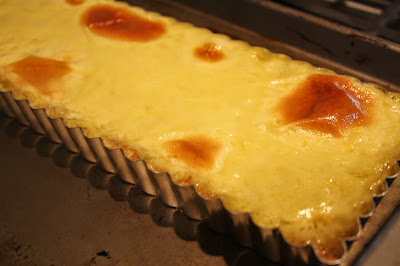 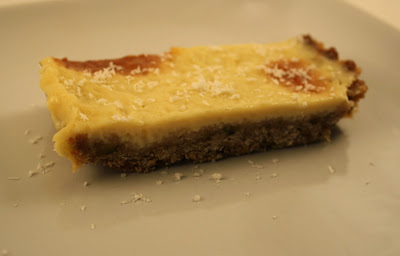