Have you heard of The Stone Soup? It’s a great food blog where the emphasis is on cooking good meals quickly and with very few ingredients (hence the name). Its creator has published a cookbook, and offers free e-cookbooks on the website as well. That’s also where I got this really good recipe, although it needs a few tweaks. First of all, I used the whole squash instead of half of it, and I used 1 onion instead of 2. I cut the pieces of squash smaller than they were in the original recipe, and I had peeled the squash, so I was afraid that it would be overdone and too soft, but the opposite happened – the squash wasn’t cooked through. In addition to cooking it 1 hour at 350 °F, I put it back in the oven the next night for 30 minutes at 425 °F, and then it was awesome. Next time, I’d consider 45-60 minutes at 400 °F or something along those lines, checking for doneness towards the end, so that’s what I’m writing below. You could also use sweet potato or other root vegetables instead of the squash, or chicken instead of the sausage to shake things up.

Roast for about 45-60 minutes, stirring halfway through. It’s ready when everything is golden and tender.

Serve with parsley leaves sprinkled over the top. 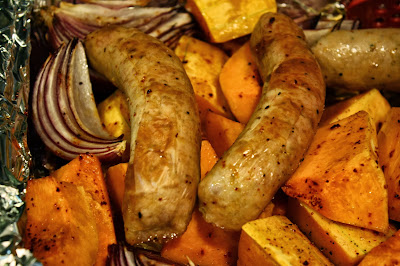 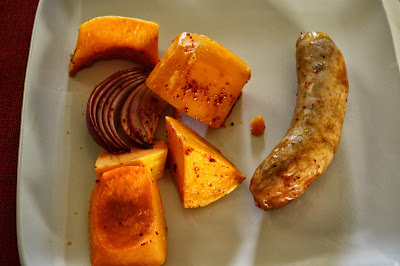