After making my Meyer lemon frozen cream, I wanted to keep going with Meyer lemon desserts, so I made this Shaker pie with four Meyer lemons. I’ve made and enjoyed Shaker lemon tarts before (though the last ones didn’t turn out too well), but this one had the distinction of being a double-crust pie, which I’d never had in lemon flavor before. Plus, I had a mandoline to slice the lemons, so my job was much easier this time. I found the filling to be a bit too liquid, though I enjoyed the taste, as it had enough lemon to balance out the sugar. The Engineer, however, didn’t like the lemon slices. He enjoyed the part where the lemony filling, almost like custard, met the crust, but did not enjoy the lemon slices themselves at all. When I said he should think of it as marmalade, he said that he actually pushes the zest and rinds out of the way in that, too. So there you go, it’s not for everyone. 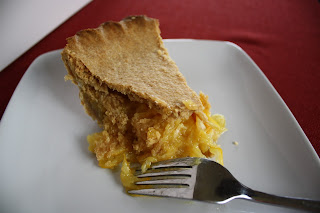 Then I tried this Meyer lemon loaf cake, which I found on Food Gal, though it is originally from Saveur magazine. And yes, they actually do call it “the best damn Meyer lemon cake.” The recipe said that the batter would be very thin, but mine was not thin at all! It was in fact quite thick, so I was afraid I would have a repeat of this peach yogurt cake with cinnamon glaze I made a while back (good idea in theory, but super thick and dense in practice). Luckily, though, the Meyer lemon loaf came out just fine, after 50 minutes in the oven. Once the loaf is baked, you cover it with a warm syrup made with Meyer lemon juice and sugar, then let it soak in for a while. You’re supposed to invert the loaf out of the pan, invert it again so it’s right-side-up, and wrap it in plastic wrap for 24 hours. I was afraid I’d spill some syrup that hadn’t been soaked up yet, so I ended up putting plastic wrap right on the pan and left the whole thing in there, only inverting it after 24 hours. That’s what I would recommend (and apparently, so does the food stylist at Saveur). It was actually a little dryer than I thought, because the syrup had only been soaked up by the edges and not by the entire loaf cake, but man, were the edges good! It was a good cake for desserts, breakfast and snacks, and the Engineer declared it an awesome loaf. If you still have Meyer lemons, give it a try! You could also try it with regular lemons, but you’d need to up the sugar a little. 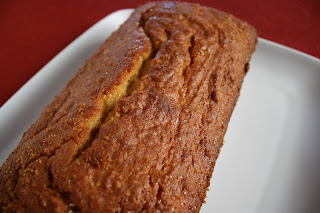 Preheat oven to 350 °F. Grease a light-colored metal loaf pan (8 ½ x 4 ½ inches) with 1 Tbsp. of the butter and dust it with bread crumbs. Invert and tap out excess crumbs; set aside.

In a food processor, grind almonds until very fine, about 1 minute; set aside.

In a bowl, sift together flour, baking powder, and salt and set aside.

Put remaining butter into a large bowl and add 1 cup of the sugar. Mix with an electric mixer on low speed until combined, about 1 minute. Add eggs, one at a time, beating just long enough to incorporate, about 30 seconds. Add flour mixture and milk mixture in 3 batches, beginning and ending with the flour. Beat until mixed after each addition, scraping down sides of the bowl with a rubber spatula, about 3 minutes total. Mix in the lemon extract. With the spatula, fold in lemon zest and ground almonds. (The mixture is supposed to be thin, according to the original recipe, but as I said, mine was quite thick.) Turn batter into prepared pan and bake until a toothpick inserted in the center of the cake comes out clean and dry, about 65 minutes. (Since my batter was so thick, I checked on the loaf earlier, and it was done after 50 minutes in the oven, but not quite done at 45 minutes.)

Transfer pan to a cooling rack. Prepare the glaze by combining remaining sugar and lemon juice in a small saucepan over medium heat and cooking, stirring, until sugar is dissolved, about 2 minutes (Do not boil.) Brush glaze over hot cake. (The excess liquid may pool along the sides of the pan; it will absorb completely as it sits.) Once the cake has absorbed all the liquid, turn it out of the pan with the aid of a sheet of parchment paper. Turn cake right-side up on a rack, and remove parchment. Once it’s cool, wrap the cake with plastic wrap and let it stand at room temperature for 24 hours before serving. (As stated, if you feel like leaving the cake in the pan for the whole 24 hours, I think that’s fine too; just cover the top with plastic wrap and unmold it when you’re ready to serve.) 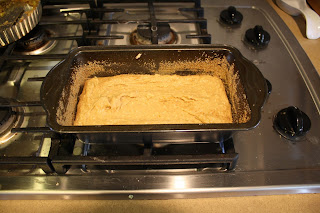 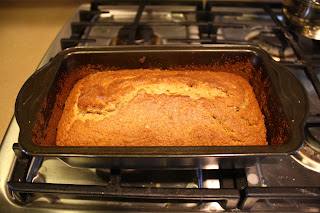 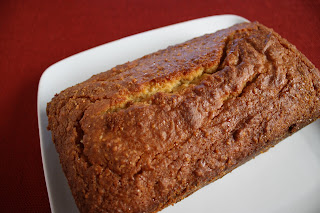 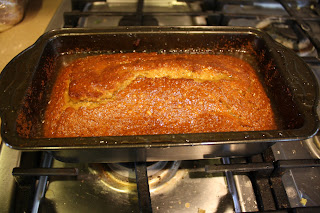 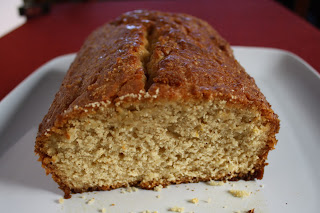