I just realized that today is World Nutella Day. I’m not sure who comes up with these holidays, and considering that it’s always the day or week of something or other, I tend not to pay any attention to all the hype. I do, however, have a post about homemade Nutella in the works, so I decided to see if I could get it ready to post it today.

I first decided to make Nutella (or perhaps I should say chocolate spread) last spring, and as I did, I wrote down my impressions (so it’s not like the fridge is full of Nutella right now, far from it). The first recipe I tried was the one on David Lebovitz’s blog. It called for 40 g. of almonds and 160 g. of hazelnuts, but the amount of almonds is so small that I ended up using 200 g. of blanched hazelnuts (thereby saving myself the trouble of peeling them). There’s nothing like the smell of roasting hazelnuts! I just love it; it smells sweet and almost like raspberries, and it really brings out the taste. The recipe called for both milk (I used lactose-free milk, naturally) and milk powder (I used soy milk powder). It also called for 6 oz. of semisweet chocolate, which I had, and for 5 oz. of milk chocolate, but for that I used instead 4 oz. of milk chocolate and 1 oz. of bittersweet chocolate, since I do like dark chocolate more anyway. While the result was good, I found it a little grainy, and even after refrigeration, I thought it was too liquid, probably because of the milk. Plus, it was really pale, almost like chestnut paste, and didn’t taste enough like chocolate to me. And I ended up with 3 Bonne Maman jars full of it! I used them up in recipes that call for Nutella, including Ricardo’s Nutella brownies, but I’m not posting that recipe just yet, since the result literally paled in comparison to what I normally get. (Who ever thought a chocolate spread by David Lebovitz would fail to meet my chocolate expectations?) 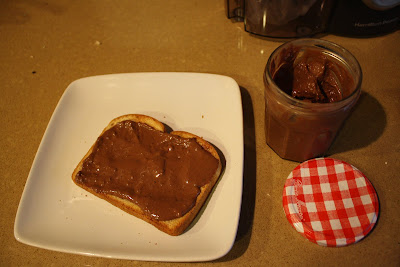 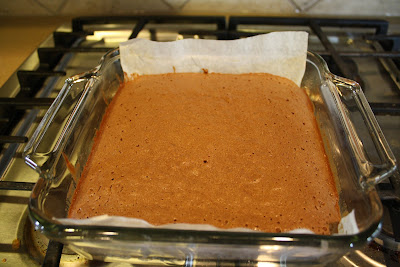 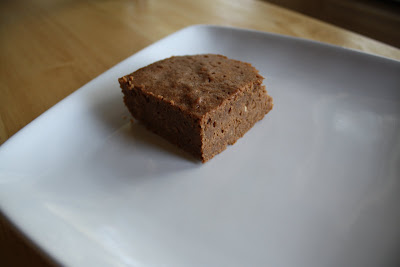 For my next recipe, I tried a vegan one from The Kind Life. This one called for 12 oz. of vegan milk chocolate, and since I couldn’t find any, I used 12 oz. of semisweet chocolate, which I prefer anyway. I also couldn’t find hazelnuts that day, but I did have macadamia nuts in the freezer, so I used those (and again, they’re peeled!) and toasted them for 5-6 minutes in the oven. I also reduced the salt from ¾ tsp. to ½ tsp. The color was much better than my previous batch, and I loved the taste, but I did find it a little too stiff to spread on bread. (Then again, I put it in the fridge as a reflex, but it could be stored at room temperature for a week without a problem.) This recipe is my second favorite.

I had set all that aside for months, and got back into it recently, trying a third and final recipe (after eliminating one that I had seen on Pinterest, because it was basically the same but had more sugar). It’s from The Kitchn and is faster than the other two, because you don’t have to melt any chocolate. Just use quality cocoa powder, throw everything in a food processor and call it a day! That being said, I did have to peel the hazelnuts, but I did it the Alice Medrich way, which was new to me, and it was much easier than toasting-then-rubbing-in-a-tea-towel. Do follow the link and watch her show her method to Julia Child, it’s wonderful! This Nutella was delicious, and though I must admit that it does get a bit too stiff if refrigerated, it’s perfectly safe to leave it at room temperature if you are going to be eating it within a week (and trust me, you will). This is the recipe I’m sharing here, and it happens to be vegan too!

Before we get there, though, I’d like to mention a chocolate spread that I discovered in Montreal over the summer. It’s made in Israel and imported by a company based in New York State. It is is called Hashahar H’Aole L’Mehadrin Special Cocoa Spread, and is not only vegan, but it also has the distinction of being nut-free! I’ve got a jar on hand and it does keep for a long time. While it has good color and consistency, though, I must admit I find it a little too sweet (sugar is the first ingredient, followed by vegetable oil and then cocoa). I’m sure there are other recipes for nut-free chocolate spread online, but I haven’t really taken the time to look. 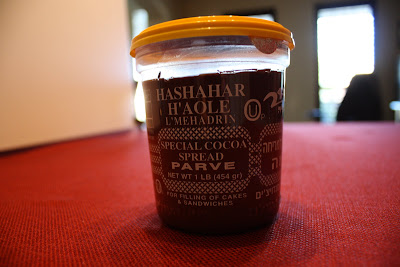 So here’s the recipe I preferred, the one using cocoa powder. I made this one recently, and strangely, the Engineer was under the impression that I made chocolate spread all the time. I told him that it was only the third time I made ANY chocolate spread, and I was really pleased with myself for finding a winning recipe, but to him, it was just like, “Oh look, my wife made Nutella AGAIN.” Not that he’s tired of it, I don’t think, but I do tend to eat sweet breakfasts more often than him, as he’s in more of a savory kind of mood in the morning. So anyway, my making Nutella does not impress him at all, but I think it’s worth it, especially since I think this tastes much better than actual Nutella (I think it’s the salt). This would also be great to replace Nutella in recipes, not just as a spread! The recipe makes a little less than a cup, but it could be doubled if you wish.

In a medium saucepan with high sides, bring 2 cups of water to a boil. Add 3 Tbsp. of baking soda to the water – the water will foam up. As a matter of fact, it will foam up quite a bit later on, too, so don’t be afraid to use a much larger pot than you think you need!

Add the nuts to the boiling water and boil for about 3 minutes. The water will turn black – don’t be alarmed. While the hazelnuts are boiling, prepare a medium bowl of ice cold water. After three minutes, use a slotted spoon to remove one test nut, placing the nut into the prepared bowl of ice water. Use your fingers to remove the skin; if the skin doesn’t come off easily, boil the nuts 1-2 minutes longer and try another test nut. When a test skin rubs right off, add the rest of the nuts to the ice water and peel them with ease.

Place peeled nuts into a kitchen towel or paper towels and dry them thoroughly.

Place the peeled and dried nuts on a baking sheet and toast at 350 °F for about 10 minutes (or up to 15 minutes). The taste is worth it, and your kitchen will smell delicious!

Place the hazelnuts in your food processor and blend continuously until they turn into a smooth butter, about 3 minutes. (This would work better with a Vitamix, but I did get pretty good results with my food processor; I stopped when the nuts were the consistency of wet sand.) Add the remaining ingredients and continue blending until smooth and creamy.

Assuming the weather is not too warm, the chocolate spread will keep on the counter for a week. Otherwise, refrigerate it for up to a few weeks. 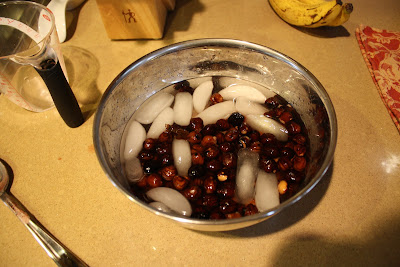 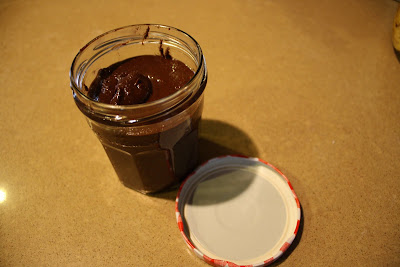 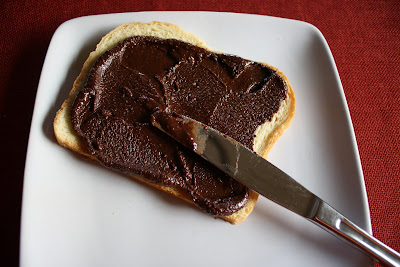 hey, is the bonne maman chestnut spread lactose-free?? thanks!!!

Yes, it is! I believe it's just sugar and chestnuts (maybe with some vanilla, and some brands might add water as well, but I don't recall ever seeing it made with dairy).