I tried to make a few things with rhubarb this summer, because I didn’t want to miss the season entirely. I made another strawberry rhubarb pie, but it wasn’t as good as my old one. I liked the idea of using the egg wash and sugar on the bottom crust before putting in the filling, as well as on the top crust, but the filling was much too liquid for my taste, and the pie wasn’t anything special. I also tried vanilla roasted rhubarb and strawberries from Bon Appétit, and I think it would have worked well with fresh rhubarb, but despite the cooking time here, using rhubarb that was previously frozen is a bad idea.

The good dessert I made turned out to be a vegan sticky orange cake (as I’ve said before, vegan cakes are often easy to make when you find yourself without a mixer). It’s made with orange marmalade; the Engineer originally didn’t like the idea of biting down on the orange peel, but it dissolves on the stovetop, so there’s really no need to strain the marmalade. This cake was delicious, both for breakfast or dessert, and a single slice made me feel really full!

For the glaze
¼ cup orange marmalade
1 Tbsp. rum or vodka (or water)

In a large mixing bowl, whisk together the flour, sugars, baking soda, salt, and orange zest. Whisk until thoroughly combined, crumbling the brown sugar with the tips of your fingers if necessary.

In a separate bowl or large measuring cup, whisk together the orange juice, vegetable oil, vinegar, and vanilla. Quickly mix the wet ingredients into the dry mix and whisk thoroughly. Pour the batter into the prepared cake pans and bake for 30 to 35 minutes.

Let the cakes cool for about 20 minutes in the cake pans, then run a knife around the inside of the pan to release each layer. Turn the cake layers out onto cooling racks. Glaze while the cakes are still warm, but not hot.

To make the glaze, mix the marmalade and rum or vodka in a small saucepan. Warm over medium-high heat for about 5 minutes, until the glaze is bubbling and hot. Turn off the heat and immediately glaze the cake.

Place one cake layer on a cake plate. Pierce the top with a toothpick a few times. Using a slotted spoon, lift out the solid bits of the marmalade and set them aside in a small bowl. Pour about half the liquid in the saucepan over the first cake layer. Place the second layer on top of the first, and repeat. Spoon the solid bits of marmalade peel on top of the cake. (I didn’t bother using a slotted spoon, so I had bits of peel in between the layers as well. I’d consider adding more orange zest to the top of the cake next time, as it’s a nice decorative element.) 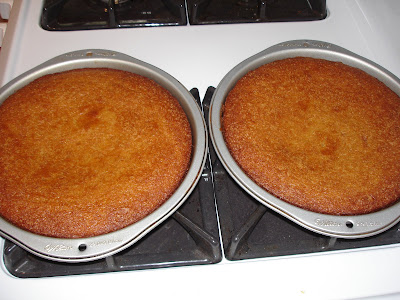 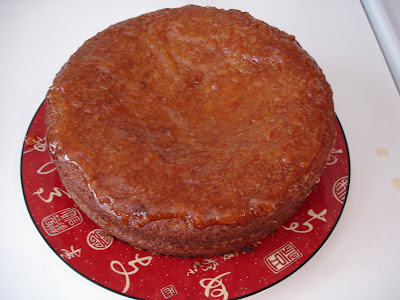 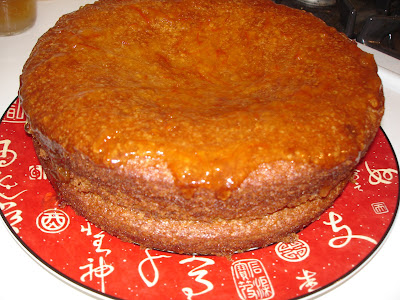