I’ve been continuing to treat myself with Damafro’s lactose-free goat cheese (I do wish they would export to the States, or that someone over there would have the good sense to start making it!). I made delicious toasted half-baguettes topped with goat cheese, strawberries, fresh pepper and basil (recipe from Coup de Pouce), which were great for lunch. I also tried a potato, squash and goat cheese gratin that, sadly, fell short of my expectations.

The other thing that we don’t have in the States yet (and I say “yet” because it only seems logical that Lactaid will start making it at some point in the not-too-distant future) is lactose-free cream. You can use it in any recipe that calls for cream, of course, but you can also use it as a base to make crème fraîche. So I took the opportunity to make my own lactose-free crème fraîche, which is actually super easy. I first looked at the recipe on The Wednesday Chef, which calls for cream and buttermilk, then looked around online to make sure I understood the reaction going on, and used yogurt instead of buttermilk. You need to make sure your cream isn’t ultra-pasteurized (which, if you’re making it lactose-free, shouldn’t be a problem because Natrel’s cream worked just fine), and you need something with active cultures: I used lactose-free plain yogurt, but real buttermilk or sour cream apparently work as well (I don’t have access to either of those lactose-free here, so yogurt it is). All you do is pour 1 cup of cream into a jar and add 1 Tbsp. of plain yogurt, mix, screw the lid on the jar and leave it at room temperature 8 to 24 hours, until the mixture thickens (I left mine on the counter overnight). Then you mix again (or shake the jar) and refrigerate 24 hours, which thickens the cream further, and you’re good to go! The crème fraîche keeps for about 2 weeks in the fridge (assuming your cream wasn’t about to expire, of course).

So I finally got to make this honey-roasted onion tart from Bon Appétit; I’d kept the recipe all this time because it looked really good, but I had to be in Canada to make it lactose-free (and also be motivated enough to make the crème fraîche in the first place, though that turned out to be so easy that I literally made it in my sleep). While I didn’t quite follow the recipe (I was on automatic pilot and caramelized onions on the stove instead of mixing the raw onions with dressing and roasting them in the oven, which I rectified by mixing some seasonings with the caramelized onions before putting them on the tart), I found this tart fabulous. It’s hard to go wrong with any recipe that calls for bacon, caramelized onions and puff pastry, but throw in crème fraîche and it’s just heavenly! It’s great for an appetizer, of serve it for dinner with a green salad.

Cook bacon in small skillet over medium heat until brown and crisp. Transfer to paper towels to drain. Reserve 1 Tbsp. bacon drippings from skillet. Whisk honey, wine, and reserved 1 Tbsp. bacon drippings in large bowl. Add onions; toss to coat. Coat another large rimmed baking sheet with nonstick spray. Spread onion mixture in even layer on sheet. Roast 30 minutes. Turn onions over, allowing rings to separate. Roast until onions are caramelized, turning often for even browning, 30 to 45 minutes. Remove from oven; cool onions slightly. (Alternatively, you can caramelize the onions on the stovetop, mix the bacon drippings with the honey and wine in a bowl, then mix it all together if you find that easier.)

Increase oven temperature to 400 °F. Mix crème fraîche, sea salt, pepper, and nutmeg in small bowl. Using offset spatula, spread crème fraîche over crust to folded edge. Arrange onions atop crème fraîche. Sprinkle with bacon (at this point, since I hadn’t used all the dressing with my onions, I drizzled a bit more honey on top of the tart). Bake tart until crust is light golden brown and topping is bubbling, 20 to 25 minutes. Sprinkle with thyme and serve. 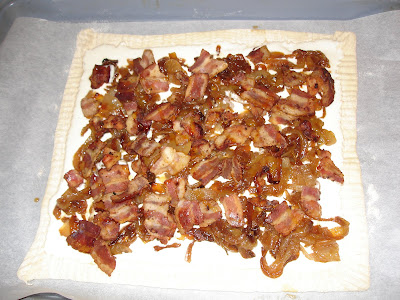 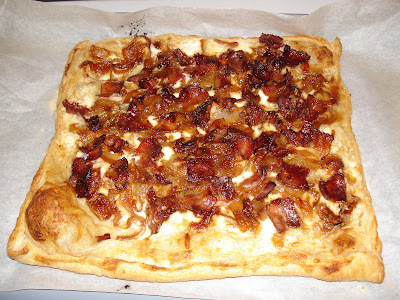 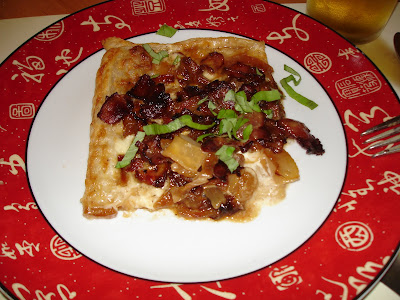