If you’ve been reading this blog for a while, the idea of beets in a chocolate cake is nothing new to you. Beets keep a cake moist, and give it an earthy flavor that goes really well with the crème fraîche in this recipe. When I started seeing Nigel Slater’s recipe popping up online, I bookmarked it, but sat on it until I could have access to lactose-free crème fraîche. Since I finally had the opportunity to make some in Quebec, I got around to making recipes that called for it (the honey-roasted onion tart, a white salad that was good but not great, and this cake).

As a reminder, to make lactose-free crème fraîche, all you need is lactose-free cream that hasn’t been ultra-pasteurized (Natrel makes some) and lactose-free plain yogurt, the kind with active cultures. Put 1 cup of the cream in a jar, add 1 Tbsp. of the yogurt, mix it well, screw the lid on and leave it on the countertop, at room temperature, for 8 to 24 hours, until the mixture thickens. Then you mix it once more and put it in the fridge for 24 hours, so it can thicken some more. It keeps in the fridge for up to 2 weeks.

I first saw this recipe on CakeSpy, then David Lebovitz posted it while discussing what makes a good recipe, or good collection of recipes, in his opinion. I used both posts to get the correct amounts for ingredients, because there were some typos in the first and I needed a little help converting units. The recipe calls for the beets to be boiled, with the skin on, which took longer than the recipe said. I think you could also roast the beets, if that’s your preferred method (about 1 hour at 400 °F should get your beets tender). Since I don’t have a food processor here, I mashed the beets with a potato masher, and it worked fine. I also don’t have a springform pan, so I used two 9-inch round cake pans lined with greased wax paper and baked the cakes 30 minutes instead of 40 – they were cooked all the way through, which I like, but with a springform pan you can afford to let the center a bit molten.

Grease an 8- or 8 ½-inch (20 cm) springform pan and line the bottom with parchment paper; grease the paper. (I used two 9-inch round cake pans; you can also use a bundt pan, provided you line it with paper as well.)

Boil the beets in water with the lid askew until they’re very tender when you stick a knife in them, about 45 minutes (this took much longer for me). Drain, then rinse the beets with cold water. When cool enough to handle, slip off the peels, cut the beets into chunks, and grind them in a food processor until you get a coarse, yet cohesive, purée. (If you don’t have a food processor, use a cheese grater or a potato masher.)

In a large bowl set over a pan of barely simmering water, melt the chocolate, stirring as little as possible. Once it’s nearly all melted, turn off the heat and remove the bowl. Immediately put the coffee in the hot water (if you haven’t made the espresso already) and stir. Measure out 4 Tbsp., put them in the bowl with the melted chocolate and stir the mixture once. Put the bowl back on top of the pan, then add the butter/margarine. Press the butter pieces into the chocolate and allow them to soften without stirring.

Sift together the flour, cocoa powder, and baking powder in a separate bowl.

Remove the bowl of chocolate from the heat and stir until the butter is melted. Let sit for a few minutes to cool, then stir the egg yolks together and briskly stir them into the melted chocolate mixture. Fold in the beets.

In a stand mixer, with electric beaters, or by hand, whip the egg whites until stiff. Gradually fold the sugar into the whipped egg whites with a spatula (I added the sugar gradually as I was whipping the whites), then fold them into the melted chocolate mixture, being careful not to overmix.

Gently fold in the flour mixture.

Scrape the batter into the prepared cake pan, put the cake in the oven and immediately reduce the heat to 325 °F; and bake the cake for 40 minutes, or until the sides are just set but the center is still is just a bit wobbly. Do not overbake. (If using two 9-inch round cake pans, 30 minutes will do it.)
Let cake cool completely, then remove it from the pan.

This cake tastes better the second day; spread with crème fraîche and sprinkle with poppy seeds shortly before serving. Or serve them alongside. If crème fraîche is absolutely out of the question, you could try sour cream (though it might be too tangy), lactose-free vanilla ice cream, or sprinkle the cake with powdered sugar; that being said, I really do recommend the crème fraîche. 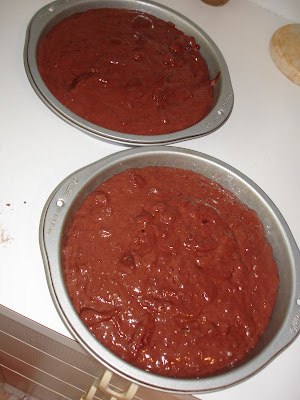 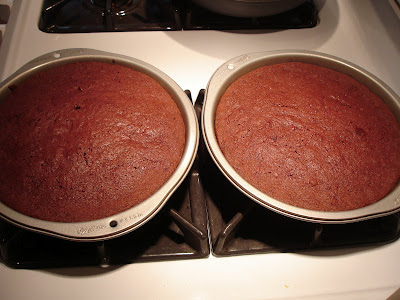 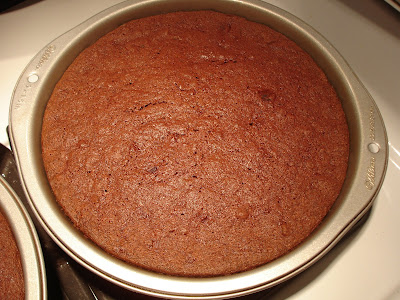 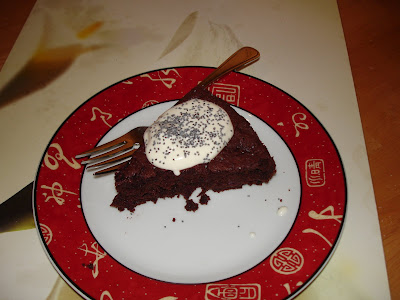