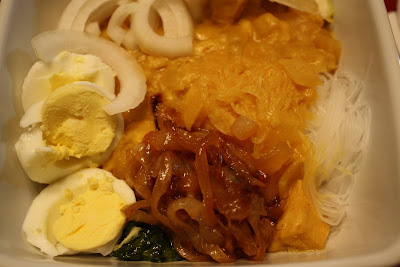 I’d like to apologize to all of you. First, for taking so long to make this recipe after I had bookmarked it. Then also for not telling you about it immediately after I made it. It was absolutely fabulous! The Engineer said he didn’t expect something quite so amazing, and that it was good enough to be served by a restaurant chef. I also completely loved this dish.

I found the recipe on Tea & Cookies and modified it slightly, using four split chicken breasts instead of 2 lbs of chicken, and 2 Tbsp oyster sauce instead of 3 Tbsp fish sauce. I also reduced the amount of broth called for (down to 2 cups of broth and 1 ½ cans of coconut milk, from 7 cups of broth and 3 cans of coconut milk; it was plenty, but it depends on how much chicken you have and what size pot you use). It’s certainly not hard to make, but be aware that it is labour-intensive, as you have to caramelize an onion, hard-boil eggs and boil noodles on top of making your main chicken. However, the results are well worth it, and you will thank me. We had enough for 6 generous servings.

Combine the fish sauce, soy sauce, garlic, ginger, and turmeric in a bowl. Add the chicken and mix well (use gloves if you want to protect your fingernails from being stained yellow by the turmeric, or use a fork). Set aside.

In a large pot, heat the oil until runny and shimmering (1-2 minutes). Stir in the two chopped onions and cook until translucent (3-4 minutes). Add the paprika and mix well.

Add the chicken and mix well. Raise the heat to medium-high and stir to cook thoroughly, about 4-5 minutes. Add the coconut milk and stock and bring to a boil. Stir constantly to prevent curdling. Reduce the heat, cover, and simmer for 20 minutes.

After 20 minutes, stir in the garbanzo bean flour paste and return to a boil. Simmer until the sauce thickens (5-10 minutes). Taste and add more fish sauce or soy sauce, as desired. Reduce heat and keep warm until serving.

Cook the noodles in a large pot of boiling water and drain. Rinse and place in a large bowl, adding a small amount of oil to prevent sticking.

Divide the noodles among individual bowls and ladle the curry sauce over them (about a cup and a half). Garnish with eggs, chilies, cilantro, onion, caramelized onion, and lemon wedges. Mix it all up, and then eat. 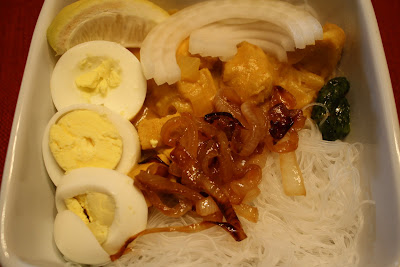 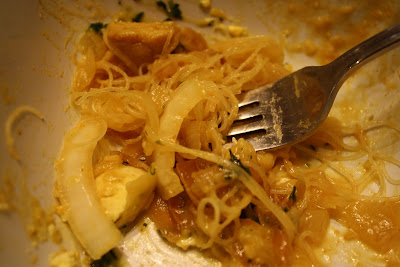