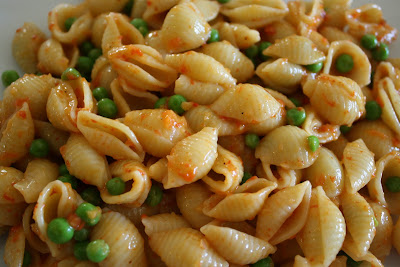 I should let you know right off the bat that this Smitten Kitchen recipe is meant for fresh summer peas. That being said, I omitted the snow peas and I didn’t feel like shelling fresh peas. I did buy a bunch of fat sugar snap peas, but I ended up snacking on them, whole. So I adapted the recipe and used only frozen peas, but you can do as you wish. I do recommend using shell pasta, though, because then the peas get cradled in the shells, and it forces some reluctant pea-eaters (*cough* the Engineer *cough*) to eat their peas. Personally, I love peas, so this was a hit. If you want to serve this as a pasta dish with sauce, reduce the amount of vinegar a bit; otherwise, as the name suggest, it really is a salad. Next time I make it as a warm dish, I’ll double the sauce recipe (but it is the right amount for a salad, certainly.) That being said, it was great served warm immediately after being made, with some parmesan sprinkled on top. You could also add goat cheese, feta or herbs (I’m thinking basil would be really nice). The roasted pepper vinaigrette would also been nice in a white bean salad or a green salad. We both really liked this dish, and the Engineer in particular was impressed by the roasted red pepper dressing.

To peel the roasted bell pepper, I used a trick I picked up watching Curtis Stone on Take Home Chef: as soon as you take the pepper out of the oven, put it in a bowl and cover it with plastic wrap. Since the pepper is still very hot, the bowl will fill with steam, helping to loosen the pepper’s skin. Once it has cooled down, you can peel the skin right off.

For the Roasted Red Pepper Vinaigrette (this makes about 1 cup; consider doubling this recipe)
1 red bell pepper
¼ cup olive oil
1 Tbsp red wine vinegar (and up to 3 Tbsp more if you are leaning more toward a salad than a hot dish)
1 Tbsp chopped shallot (about 1 small)
½ tsp salt
several grinds of black pepper

Preheat the oven to 350 °F. Cut the bell pepper in half, seed it and slow-roast it for 1 hour, giving it a quarter-turn with tongs every 15 min or so. Once it’s done, immediately place it in a bowl and cover with plastic wrap. When cool, peel the skin off the pepper. (You can also get the equivalent from a jar and drain it.) 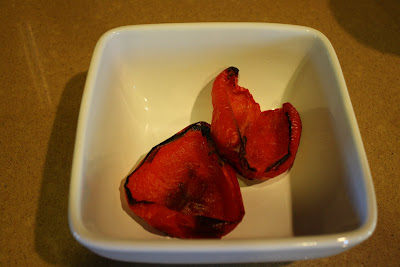 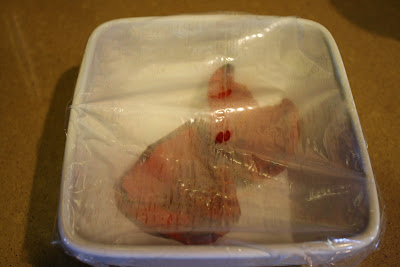 Purée the red bell pepper in a food processor or blender as much as possible, then add the remaining ingredients and running the machine until the dressing is silky smooth. (I did this in the jar of the immersion blender, and I found it to be the perfect size for this.) Adjust the vinegar level and seasonings to taste. 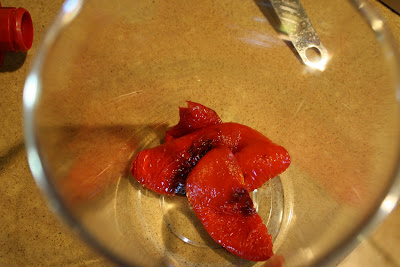 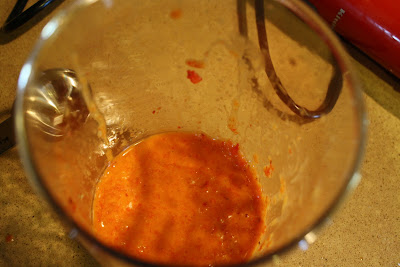 For the Pasta
1 lb of small pasta (like shells; use gluten-free and/or vegan pasta if you need it)
¼ lb snow pea pods, ends trimmed
½ lb fresh summer peas, which yielded about 1 cup once shelled (or substitute frozen peas)
1 cup Roasted Red Pepper Vinaigrette

Add the pasta into the boiling water and cook it according to package instructions. Drain and let cool, then toss in a large bowl with peas and Roasted Red Pepper Vinaigrette, seasoning to taste. 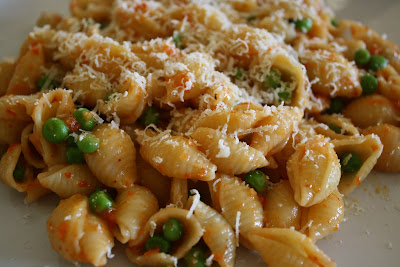 I wonder what it is about peas... I love peas and always have, but Jen couldn't stand them when we got married. When she was young she would never have real peas and only that mush from a can. After tasting that, I understand why she she didn't want to try real peas (frozen and fresh). Was it the same with the Engineeer?

No, my parents fed me regular peas without much garnishing and I still dislike them. However, I DO like tender peas, as I discovered.