A kohlrabi salad and some a-ha moments

So last weekend, as you saw, we did some reorganizing in the kitchen. Also, the Engineer made a Dutch apple pie with the last of the apples. 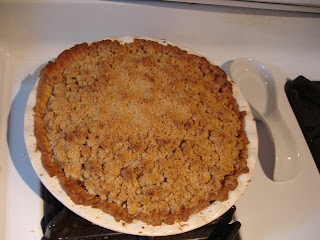 We also went to the movies and, while we were downtown, decided to poke our heads into Mourrelatos to see if they had fresh cranberries for the sauce I was going to make. Now, downtown isn’t exactly known as a place to find good cooking ingredients, but this was on our way home, so it was worth a shot. And wouldn’t you know it, they had some. But they also had a TON of other stuff! It is both terribly frustrating as well as eerily thrilling whenever we realize that just about any grocery store we walk into is, by leaps and bounds, better than our local Metro. That’s an a-ha moment right there – we need to go shop further away from home if we are to find anything interesting. 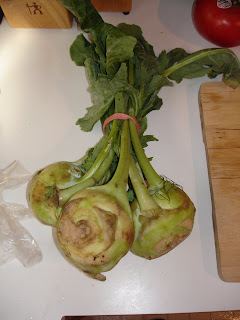 So Mourrelatos had ingredients for which I had been looking for a long time. Including kohlrabi. This might seem weird, but I had read about a kohlrabi salad on Orangette, and it looked so good that I decided to keep an eye out for it. I got really excited when I saw it, and the Engineer looked at me, dumbfounded. It is a strange-looking vegetable, I’ll grant you that. About a dozen times, I saw something else that I wanted to grab, and I had the willpower to put it back in the shelf. Is it sad that the only impulse items that made it into my basket were kohlrabi, rice paper and roasted salted soy beans?

I’ll reproduce Molly Wizenberg’s recipe for kohlrabi salad (I used three kohlrabi bulbs instead of two, so I added a carrot). Also, I must say that the dressing for this is really divine! And please forgive the metal bowl in the pictures. I realize now that one of my pictures looks like hers, but really, those bowls were just the handiest thing I had at the time (since I had just found an accessible place for them and cleaned them properly).

And while making this salad, I had a major a-ha moment. I had trimmed and peeled the kohlrabi bulbs and was thinking to myself, “These are too hard for my mandoline, but if I cut them by hand, the pieces won’t be small enough. Why don’t I just try to julienne them using the attachment on my food processor?” So I did. And oh, my, God. Three seconds and I was done. I had never used my food processor to its full potential before. I had always grated everything by hand, because I thought it was less hassle (and fewer dishes to clean). But now, no more hand-granted potato latkes for me! It’s the food processor or nothing.

Trim away any stems from the kohlrabi bulb. Using a sharp chef’s knife or a sharp vegetable peeler, cut and discard away its tough outer skin. Then julienne the kohlrabi, using a mandoline, the same sharp knife or a food processor. Julienne the carrot too. 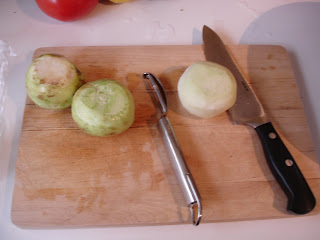 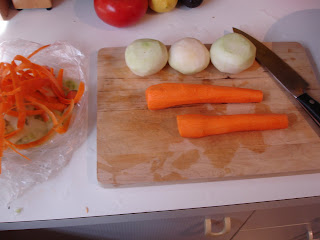 In a small dry skillet, toast the fennel seeds over medium heat until they begin to brown slightly and smell toasty. Transfer them to a mortar and pestle or spice grinder, and grind them into a coarse powder.

In a small bowl, combine the fennel seeds, vinegar, salt, pepper, and garlic. Slowly whisk in the olive oil and sesame oil. Pour over the vegetables and toss to coat. Taste, and add more salt, if needed. 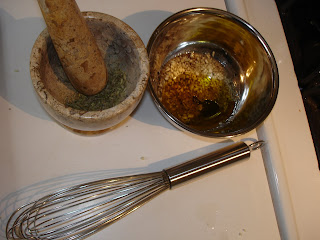 Chop the pea shoots, if using, into 1-inch pieces and toss into the salad immediately before serving. 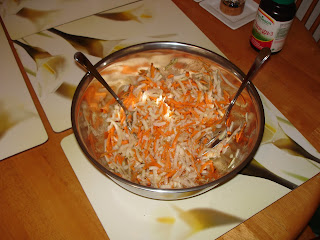