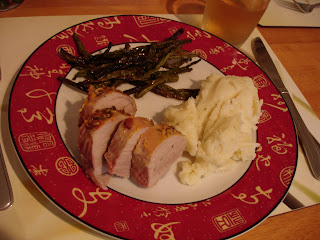 I’ve bought quite a few books recently, in part thanks to a gift card from my Fairy Godmother. My two favourite so far were Gluten-Free Girl and A Homemade Life. They were written by two of my favourite bloggers, Shauna James Ahern and Molly Wizenberg respectively. I had both books on my nightstand and I read them before going to bed. There were narratives and stories in there with the recipes, much like Hallelujah! The Welcome Table (another excellent book). I really recommend them to everyone, in case that was not obvious. Not only do the recipes look delicious, but the authors have a relaxed approach to cooking that I really enjoy. I’m very much looking forward to trying out some of those recipes – though a few will require trips to special grocery stores for ingredients like pomegranate molasses, which I’ve tasted before and loved. But while I was reading them, I feel like I was cooking less than usual. Maybe I was afraid of a food overdose? I was mostly going with simple meals (ones that I know by heart or ones that are really easy), like the one I’ll talk about here. I’m now back to reading fiction, though the book does have the words “potato peel pie” in the title.

Though I made the roasted pork tenderloin and the roasted green beans on the same night, I don’t necessarily recommend making them together, because both required the oven, but at different temperatures. This might be remedied by using the temperature for the pork and leaving the beans in longer, but I ended up making the beans first, then the pork, and I threw the beans back in a few minutes to warm them up. We served it with mashed potatoes. I got the pork recipe from my mom (who probably got it in an Anne Lindsay cookbook), and I love it both for its taste and its simplicity. I got the green bean recipe here in a desperate attempt to cook them in such a way that I would enjoy them – and it worked. They came out almost like green been fries really, so I’ll try cooking them a bit less next time, even though that was the intent of the original recipe as far as I can tell.

Preheat the oven to 350 °F. Put the pork in a roasting pan. Spread the mustard on top and sprinkle with herbs, salt and pepper. 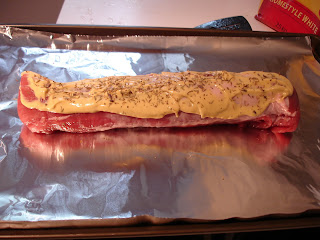 Cook for about 35 to 45 minutes, or until the pork is just barely pink inside. To serve, cut into thin slices (this makes 3 or 4 servings). It’s the easiest thing, really, and you’ll love it. 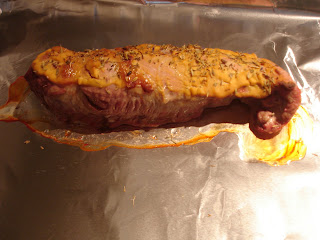 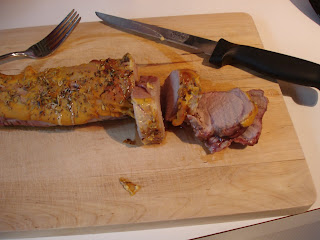 1-2 lbs green beans (I’m not even sure how much I used, but it was less)
1-2 Tbsp olive oil (just enough to coat the green beans; eyeball it)
salt and pepper 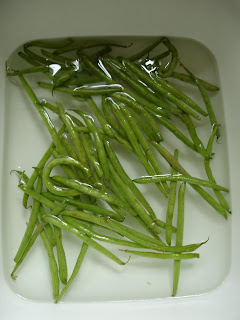 Put them in a roasting pan, drizzle with olive oil and sprinkle with salt and pepper. Mix well to coat the beans (I used my hands). Spread the beans out in a single layer. Roast for 25-30 minutes, turning over after 15 minutes, or until the beans are shrivelled and brown in a few spots. 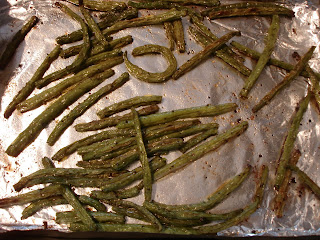 Serve hot or at room temperature. I couldn’t resist topping them with French Fried Onions I bought in Vermont (even though I never had them growing up, I know enough about American eating habits to know they are the quintessential topping for a green bean casserole, and this had the same main ingredient). 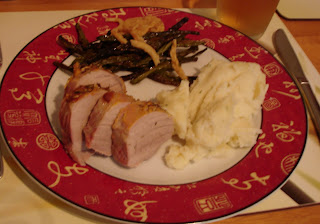