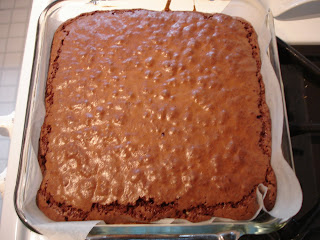 I’d told you before that I would periodically give you brownie recipes, so here is the second one. I’m calling it Molly Wizenberg’s Gooey Brownies – they may be her archetypal brownies, but they are more decadent than mine. Of course, you could always let them bake longer, but that would defeat the purpose of this recipe.

I used some of the chocolate I bought in Vermont. I had bittersweet and semisweet, but the recipe called for bittersweet and unsweetened. Undeterred, I took a quick look at a useful substitution list and realized I could just use the semisweet chocolate while cutting back about 3 Tbsp of sugar from the recipe. I’ll give it to you as it first appeared in Orangette, though. Note that I used parchment paper to line the baking pan, because I was afraid of the results otherwise (I didn’t have a problem, but that’s not to say the paper is a must).

You should also know that at this point, I still don’t have a double-boiler, and not even a metal bowl that I could set over a pan of water. I am planning on eventually getting a set of metal bowls (what we refer to as culs de poule in French), but I just don’t have the space for that in my kitchen right now. The Engineer and I keep dreamingly talking about the magical time “When we have a house”, which is when it is all supposed to fall into place. More space for all those things we want, decorating the way we want, growing things in the yard, getting a dog... I realize a house won’t solve all our problems, of course, but until then, we’ll just use it as an excuse. So, until I get a house, I’ll cheat and melt chocolate in short bursts in the microwave, and no one will complain.

Center a rack in the oven, and preheat the oven to 350 degrees Fahrenheit.

In a small bowl, whisk together the flour and salt; set aside.

Melt the butter and the chocolate together in the top of a double boiler over—but not touching—simmering water (or in a metal bowl over a saucepan of simmering water), stirring frequently. When the chocolate and butter are both melted and smooth, add 1 cup of the sugar to the mixture, and stir it for 30 seconds; then remove the mixture from the heat, and stir in the vanilla extract. Pour the mixture into a large bowl. 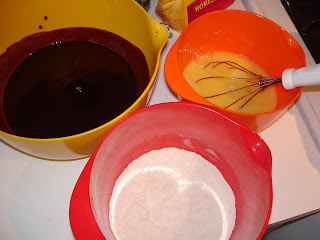 Put the remaining 1 cup sugar and the eggs into a medium bowl, and whisk by hand to combine. Little by little, pour half of the sugar and eggs into the chocolate mixture, stirring gently but constantly with a rubber spatula so that the eggs don’t scramble from the heat. Beat the remaining sugar and eggs on medium speed until they are thick, pale, and doubled in volume, about 3 minutes. Using the rubber spatula, gently fold the whipped eggs and sugar into the chocolate mixture. 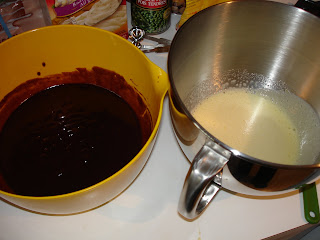 When the eggs are almost completely incorporated, gently fold in the dry ingredients. 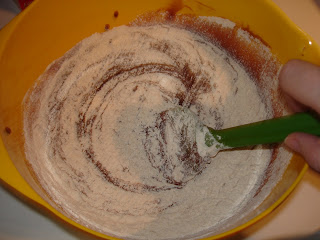 Pour and scrape the batter into an unbuttered 8-inch square pan. 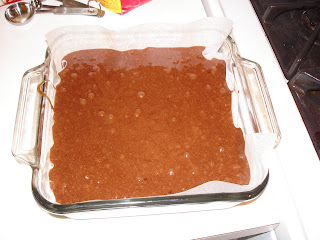 Bake the brownies for 25-30 minutes, during which time they will rise a bit and the top will turn dry and a bit crackly. After 23 minutes, stick a knife or toothpick into the center to see how they are progressing. They should be just barely set—not too raw, but still fairly gooey. Cool the brownies in the pan on a rack. When they’re completely cool, cut them into rectangular bars to serve. 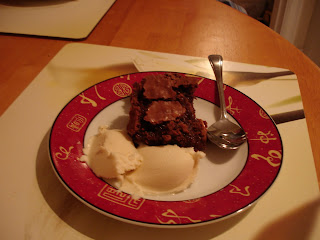 On the picture, I served it with almond sorbet, which complemented it quite nicely, though it would also be very good with Tofutti or ice cream.
Posted by Amélie at 3:57 PM