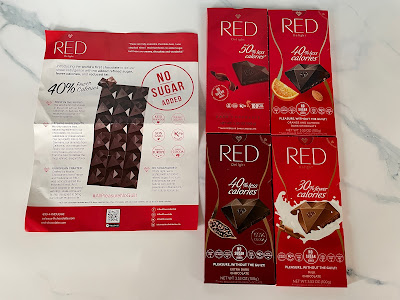 I was lucky enough to get some samples of new-to-me RED Chocolate recently. I believe the “RED” stands for “reduced” because it contains less fat and fewer calories than typical chocolate (though it is not necessarily a low-calorie food). The big draw for me was that it contains no added refined sugar (only “natural zero-calorie sweeteners”), thus making it lower in carbs and keto-friendly. All their flavors contain milk fat (which is not the same as lactose, of course) and are cross-contaminated with nuts, so keep that in mind if you have food restrictions. The bars I tried were gluten-free and kosher.
I tried four flavors. First, the RED Delight dark chocolate tastes like it has some orange in it, but that’s not listed in the ingredients. There’s a slight cooling sensation, probably from the erythritol, yet it still has a slightly bitter aftertaste. It was okay, but not my favorite.
The RED Delight extra dark chocolate feels richer, more chocolaty somehow. It had none of the “alternative sweetener” taste nor the orange aftertaste. I really like this one!
Then I had the RED Delight orange and almond dark chocolate – this one tasted of orange, obviously, but I expected that, and it also had a cooling mouthfeel. I appreciate that the pieces of almond are very small so that they almost melt away with the chocolate. I think I detected one of those pieces in the regular dark chocolate, though, so I do wonder if there was shared equipment, and the regular dark chocolate just took on a lot more of the orange almond characteristics than it was supposed to!
Finally, I tasted the RED Delight milk chocolate. It was good, but that one does have lactose, so I’ll use it as a treat in my kids’ lunchboxes.
If you are interested in trying it for yourselves, you can use code LFGIRL10 to get 10% off your order!
Update: Both kids *loved* the chocolate in their lunch! The Little Prince called it “diamond chocolate” because of the shape, and they want more. 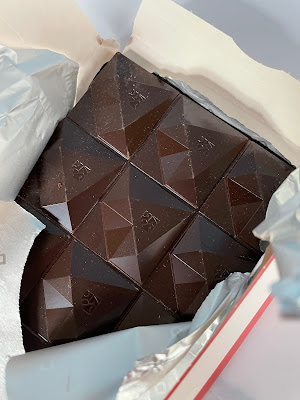 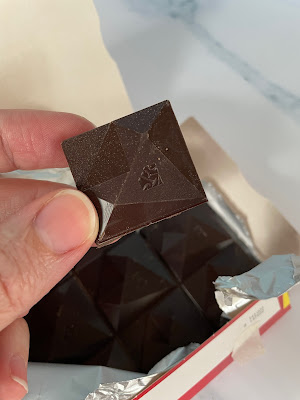