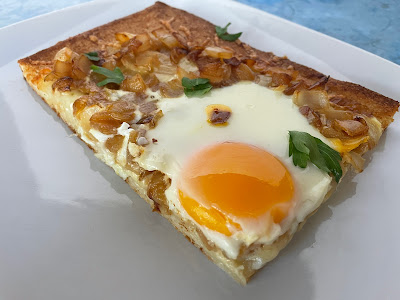 This recipe is from The Weekday Vegetarians, Jenny Rosenstrach’s latest cookbook. It’s an easy recipe, though it should be said that even though it’s vegetarian, it doesn’t really have any vegetables. (I mean, technically there’s onion, but from a nutritional standpoint, does it really count?) It would be a good idea to pair it with a green salad. I really liked the addition of garlic powder to the crust edges, and the combination of flavors was really doing it for me. Both the Engineer and I liked this, but sadly, the kids did not.
I did not stretch out the dough as required – I only had 13 ounces instead of 16, but even then, I don’t see a pound of dough stretched out that thinly! I used a smaller baking sheet and stretched the dough as much as I could. Finally, I had some trouble with the baking times. The eggs weren’t nearly done after 5 minutes! I tried baking the dough and cheese 5 minutes, adding the eggs and baking for 8 minutes and then leaving the pizza in the oven (turned off) for another 10 minutes, but that didn’t quite do it. For the second batch, I tried just putting them on the pizza right from the beginning and baking it 12 minutes total, but even then, the crust was too dark while the egg whites were not quite done. I guess the recipe still needs some tweaking.
5 Tbsp. extra-virgin olive oil, divided
3 large yellow onions, roughly chopped
1 lb. pizza dough (storebought is fine), at room temperature
¼ tsp. garlic powder
6 oz. lactose-free sharp cheddar, grated (about 1 ½ cups)
4 large eggs
kosher salt and freshly ground black pepper, to taste
chopped flat-leaf parsley, for garnish
Preheat oven to 450 °F. Arrange an oven rack in the middle position.
As the oven heats, combine 3 tablespoons of the olive oil and the onions in a large skillet set over medium-low heat. Stir every few minutes, making sure they are getting soft and golden but not blackened or burned, until caramel colored and slightly jammy, 20 to 25 minutes (I’m more of a realist and will tell you that it takes longer to caramelize onions).
While the onions are cooking, brush an 18x13-inch sheet pan (see note above) with 1 tablespoon of the olive oil. Drop the dough in the center of the pan and, using your fingers, press and stretch out the dough to the sides and into corners of the pan. The goal is to get the crust as thin as possible. Mix together the garlic powder and the remaining tablespoon of olive oil and brush the perimeter of the dough.
Top the dough with an even layer of the cheddar, leaving a 1-inch cheese-free border, and bake for 8 minutes (see note above). Remove from the oven and top with the caramelized onions, shaping them into 4 little “nests” for the eggs (one in each corner). Carefully crack 1 egg in each nest. Bake until the whites are cooked, the yolks are still slightly runny, and the crust is golden, about 5 minutes. Top with salt, pepper, and parsley. 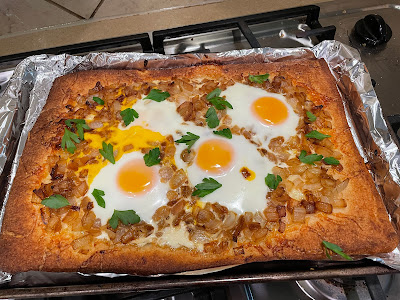 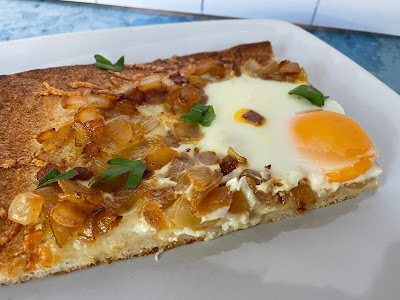 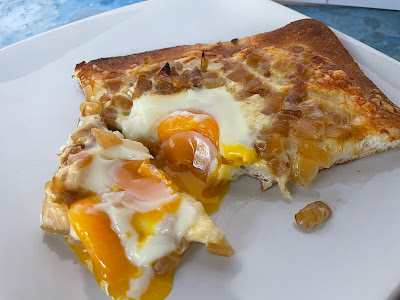