I know what you’re going to say. “It’s fall! We want something warm and comforting, like a cheese omelette soufflé!” Well, over here we’ve still got a daily high of about 90 °F, so this is still seasonal. The recipe is from the July 2012 issue of Bon Appétit, and it’s been taunting me since then. It originally calls for vegetables cut the size of matchsticks, and I think that was the mental block for me – it’s just so fussy! I mean, yes, it would look better, but this was delicious too. I stored the noodles and dressed vegetables separately in the fridge; I ended up with more of the latter, but they made a great salad on their own!
1/3 cup unseasoned rice vinegar
1/3 cup vegetable oil
1 Tbsp. sriracha (I used 1 pinch Korean pepper)
1 Tbsp. toasted sesame oil
8 cups (1 ¼ lbs.) matchstick-sized pieces mixed vegetables (carrots, radishes, cucumbers, bell peppers)
kosher salt, freshly ground black pepper
8 oz. buckwheat soba noodles (or rice vermicelli)
1 cup (loosely packed) cilantro leaves with tender stems
3 scallions, thinly sliced
1 Tbsp. white or black sesame seeds
Whisk rice vinegar, vegetable oil, sriracha (if using) and sesame oil in a large bowl. Add vegetables; toss to coat. Season with salt and pepper.
Cook noodles in a large pot of boiling salted water, stirring occasionally, until al dente; drain. Run noodles under cold water to cool them; drain well and add to the bowl with the vegetables. Add cilantro and scallions; season to taste with salt and pepper. Sprinkle sesame seeds over and serve. 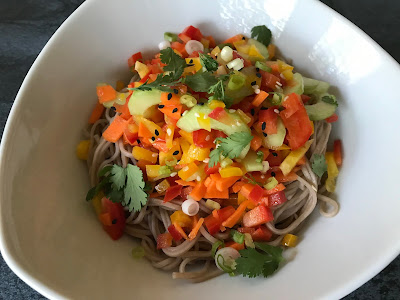