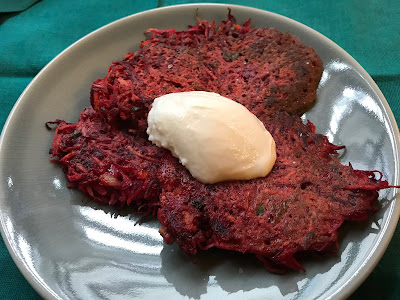 I had two parsnips left in the fridge and I didn’t know what to do with them; at the same time, I was wondering what to make for lunch the following week. Well, enter this recipe from Real Simple, which is essentially… a potato-less latke? I had fewer parsnips and carrots than called for, compensated with an extra beet, and so my latkes were red instead of deep orange, but I’m perfectly okay with that. It’s a nice color for Valentine’s Day, too. These were delicious! And the colors were so pretty in my food processor. 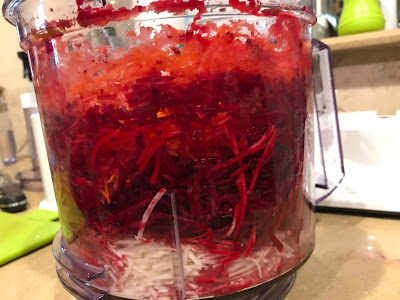 Preheat oven to 300 °F. Set a wire rack in a rimmed baking sheet.

Grate carrots, parsnips, and beet on the largest holes of a box grater (I used my food processor, because ain’t nobody got time for that). Grate onion to measure ⅓ cup (reserve remaining onion for another use). Stir grated vegetables, cornstarch, scallions, eggs, and 1 teaspoon salt in a large bowl until fully combined. (Do not let sit; mixture will become watery.)

Heat 1 tablespoon oil in a large non-stick skillet over medium. Drop latke mixture into hot skillet by ¼-cupfuls to form 4 patties, pressing gently with a spatula to even out tops. Cook, flipping once, until latkes are golden brown, about 4 minutes per side. Transfer to baking sheet and place in oven to keep warm. Repeat with remaining oil and latke mixture. 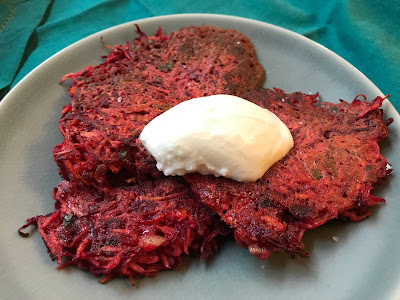