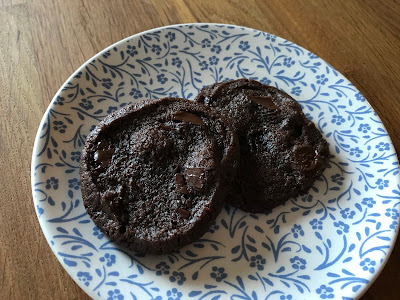 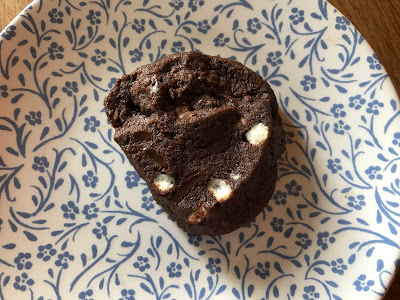 I made a few unfancy desserts that didn’t quite pan out like I wanted. There was a banana cake with penuche frosting, where the frosting never quite “took” (and it wasn’t as good as this banana cake). Black-bottom cupcakes were surprisingly underwhelming. Apricot handpies from the Minimalist Baker cookbook were bland. Loaded Oatmeal Cookies were just okay.

As I was giving my pantry a quick once-over to figure out what ingredient I should use up next, I realized that my leftover Mallow Bits (from making the lackluster hot cocoa cookies) were going stale. So I decided to make world peace cookies – it’s a recipe by Dorie Greenspan and it also goes by the name Korova cookies. And I added Mallow Bits to half the batch, just to see if I’d like that cookie better than the hot cocoa one. (Spoiler: I totally did.)

For me, the yield was about 2 dozen cookies, and I can attest that they are better when sliced on the thick side. When comparing the plain (original) version to the one with Mallow Bits, the latter won hands down for all household members; that being said, I think that the original version would benefit from a pinch of salt on top of each cookie before baking. The chocolate flavor is intense here, which is very satisfying! We all loved these.

Sift the flour, cocoa and baking soda together.

Working with a stand mixer, preferably fitted with a paddle attachment, or with a hand mixer in a large bowl, beat the butter on medium speed until soft and creamy. Add both sugars, the salt and vanilla extract and beat for 2 minutes more.

Turn off the mixer. Pour in the flour mixture, drape a kitchen towel over the stand mixer to protect yourself and your kitchen from flying flour and pulse the mixer at low speed about 5 times, a second or two each time. Take a peek — if there is still a lot of flour on the surface of the dough, pulse a couple of times more; if not, remove the towel. Continuing at low speed, mix for about 30 seconds more, just until the flour disappears into the dough — for the best texture, work the dough as little as possible once the flour is added, and don’t be concerned if the dough looks a little crumbly. Toss in the chocolate pieces (and Mallow Bits, if using) and mix only to incorporate.

Turn the dough out onto a work surface, gather it together and divide it in half. Working with one half at a time, shape the dough into logs that are 1 ½ inches in diameter. Wrap the logs in plastic wrap and refrigerate them for at least 3 hours. (The dough can be refrigerated for up to 3 days or frozen for up to 2 months. The dough can be baked right from the freezer; just add 1 minute to the baking time. I prefer baking a batch of cookies at a time and keeping the rest of the dough in the fridge for a few days.)

Center a rack in the oven and preheat the oven to 325 °F. Line two baking sheets with parchment or silicone mats.

Working with a sharp thin knife, slice the logs into rounds that are ½ inch thick. (The rounds are likely to crack as you’re cutting them — don’t be concerned, just squeeze the bits back onto each cookie.) Arrange the rounds on the baking sheets, leaving about one inch between them. Sprinkle with fleur de sel, if using.

Bake the cookies one sheet at a time for 12 minutes — they won’t look done, nor will they be firm, but that’s just the way they should be. Transfer the baking sheet to a cooling rack and let the cookies rest until they are only just warm, at which point you can serve them or let them reach room temperature. 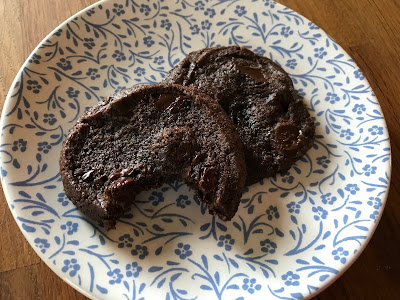 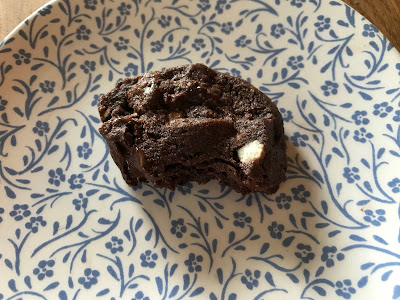