Contrary to what it may seem, given my last two posts, I do not spend my whole summer eating caramel. I make the occasional savory dish, too! Like this creamy balsamic mushroom bacon chicken. Okay, yes, it still calls for cream, but I never have it the rest of the year, so it balances out. This was delicious, by the way!

With 4 chicken breasts, it would seem that the yield should be 4 servings, but we had much more than that! I ended up freezing the leftovers. This is good served with potatoes and a green salad, for example.

In a large skillet, pour 1 tablespoon olive oil and cook the chicken on medium high heat for 3-5 minutes on each side or until golden-brown and cooked through. Remove chicken and set aside on a plate.

Add the chicken broth, cream, balsamic vinegar, parmesan cheese, and salt and pepper to the skillet. Whisk over medium high heat until it starts to thicken 3-5 minutes. Add the mushrooms to the sauce.
Add chicken to the skillet and let simmer for 1-2 minutes. Top with crispy bacon and chopped parsley. 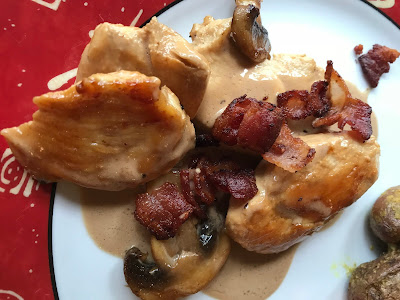 The frozen leftovers were absolutely delicious . Thank you!