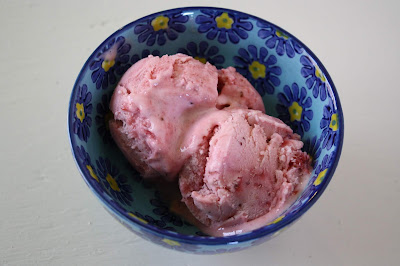 Here’s a recipe that would be best in early summer. Granted, we still have rhubarb in San Antonio, but the strawberries are not in season. I made this rhubarb and strawberry ripple frozen yogurt twice already, tweaking it a bit each time, and would have one more thing to add below.

The first time I made this, I hadn’t been able to find a lactose-free whole milk Greek yogurt at the store, so I added 4 tablespoons of maple syrup to the yogurt. This helped a bit with the taste, as it wouldn’t have been sweet enough for me otherwise, but it also helped make the frozen yogurt softer once it was frozen (both fat and sugar will do that, especially liquid sweeteners as opposed to granulated sugar). However, the frozen yogurt was still too hard for my taste.

Fast-forward a few years and I made the recipe again and increased the amount of sweetener a bit more. This time, I did have lactose-free whole-milk Greek yogurt, so I thought I’d be good, but it turns out it was still too hard for my taste – though the amount of sweetener was spot-on with seasonal Quebec strawberries. So in a last-ditch effort, do yourself a favor and add 2 tablespoons of vodka to this recipe, to make sure the yogurt isn’t rock-hard in the freezer.

Place rhubarb, strawberries, vanilla pod and seeds, and 4 Tbsp. honey in a medium size saucepan. Cover and bring to a boil; lower the heat and simmer for 10 minutes. Remove the pod and use a fork or a stick blender to mash up the fruit. Refrigerate for 1 hour or until completely cool.

Combine yogurt, vodka, the rest of the honey and ¾ of the fruit compote. Pour the mixture into an ice cream machine and follow the manufacturer’s instructions. When done, remove the ice cream paddle. Stir in the rest of the fruit compote carefully so you get a ripple effect. Pour the mixture into a freeze proof container. Leave in the freezer until firm, or as long as you like. 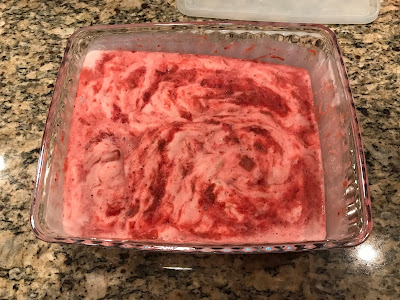