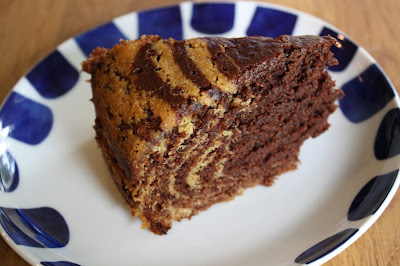 This is a lesson in how you sometimes can (or must) deviate from a recipe. I started by making this chocolate torte with ganache frosting, and somehow the ganache calls for 8 ounces of chocolate and 1 ¼ cup of milk, and goddamn it, I knew it was too much milk, but I did it anyway. I should have trusted myself and deviated from the recipe. Of course it turned into soup, but I was able to salvage it by dumping the remnants of a bag of chocolate chips into it and refrigerating it. I ended up with a decent chocolate cake frosted in a sort of chocolate pudding, but I didn’t like it as much as my husband did. (The same was true for a chocolate sour cream cake that I just wouldn’t bother making again, even though I mostly stuck to the recipe for that one, simply changing pan sizes and omitting cream in the glaze.)

Then, since we had a total of a liter of rice milk to use up from our emergency kit before it expired, I decided to make this vegan marble cake, since it calls for 2 cups of plant milk. But I was overzealous and didn’t really want a marble cake so much as a zebra cake, which is easier than it looks (but I’d never attempted one before). The batter was too liquid for my taste, and I trusted myself this time, so I added 1 cup of flour (those are the amounts I’m using below); even then, I had to bake the cake almost twice as long as recommended, so you could try baking at 350 °F and reducing the time. And since I didn’t have a heart-shaped pan, I used a 9-inch springform one. So I changed the recipe a bit, but I stand by my decision. Two things of note: First, I actually wouldn’t recommend rice milk in this recipe, because I could really taste it in the cake and it’s not my favorite taste – I’d perhaps use almond milk or oat milk next time. Or coconut milk beverage? Second, I’d make the effort to weigh each “half” of my batter next time as I’m separating it (or, more precisely, I’d weigh the total amount and make sure I pour out only half of that into a separate bowl – and ideally I’d remember to weigh my bowls in advance, too). As it was, I ended up with too much chocolate batter, so there’s a heck of a lot of that in the center of the cake. Nonetheless, I really liked it! Both the Engineer and the Little Prince loved it, so it’s a keeper. I chose not to frost or glaze it, but do as you wish.

Preheat the oven to 325 °F. Grease a 9-inch springform pan; line the bottom with wax paper and grease again, then flour the pan.

In a medium bowl, whisk together the flour, baking powder, baking soda, and salt; set aside.

Mix the milk and vinegar in the measuring cup and allow to curdle for a few minutes.

In a large bowl, whisk the milk mixture, oil, sugar, and vanilla until well blended. Add flour mixture gradually while stirring with a wooden spoon until just incorporated (do not overmix).

Separate the mixture in half into two smaller bowls (see note above). In one half of the mixture, mix in the chocolate and almond extracts along with the cocoa powder until just blended.

Pour a ladleful of vanilla batter into the center of the prepared pan, then pour a ladleful of chocolate batter centered right on top of it. Continue pouring batter in ladlefuls, alternating color, until all the batter has been used up.

Bake for 55-60 minutes or until a toothpick inserted in the center comes out clean. 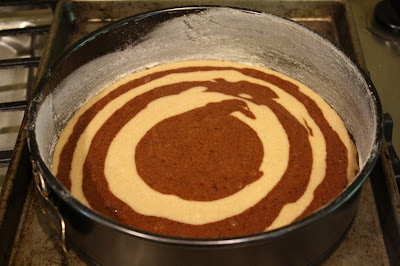 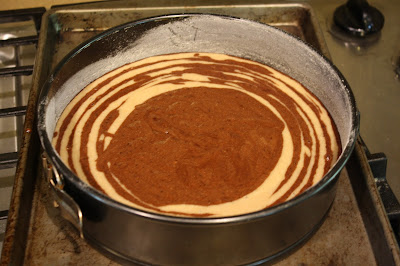 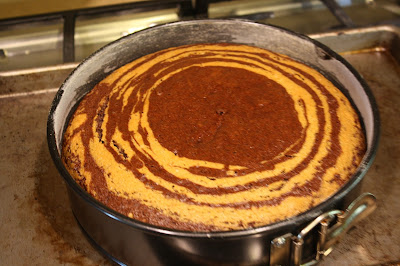 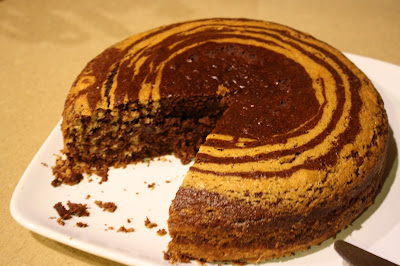 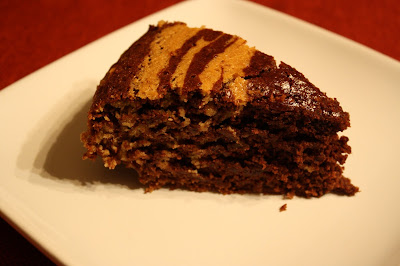