I had made this frozen yogurt recipe before, using Greek yogurt and vanilla bean paste, and I loved the taste. The tang of real yogurt is unbeatable, and the vanilla bean paste was the perfect accompaniment. Unfortunately, it turned rock hard in the freezer (I think I had used non-fat Greek yogurt), but it was so good that I wanted another go at it.

This time, I made sure to use a full-fat Greek yogurt, which thankfully are more readily available than they used to be (just make sure your yogurt has the right active cultures, especially Lactobacillus acidophilus, to be lactose-free). If you want to use your favorite brand of plain yogurt instead, you can strain it overnight – just keep in mind that you need to start with roughly double the amount you need, so to end up with 3 cups of strained yogurt, you should start with 6 cups in a strainer lined with cheesecloth. I also decided to use corn syrup in an effort to keep the frozen product softer. It worked to a certain extent, but I think next time I’d use vodka instead. To be fair, it was fine for the first few days, and I did use the whole container of yogurt (which worked out to 907 grams instead of the recommended 720 grams); but after a week, it was too hard for my liking.

This is where it comes full circle: the recipe that I linked to is on 101 Cookbooks, but it turns out it was originally developed by David Lebovitz. It just so happens that the page I randomly pulled up on Google about whether to use corn syrup in certain recipes was written by him, too. Then I looked back in my previous recipes for frozen yogurt and came across this one, which, as it turns out, was also originally by David Lebovitz. And it called for vodka, so I’m adding that below.

Mix together the yogurt, sugar, corn syrup, and vanilla bean paste. Stir until the sugar is completely dissolved. Refrigerate 1 hour.

Freeze in your ice cream maker according to the manufacturer's instructions. 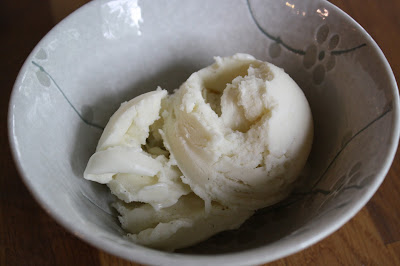