I had my eye on this recipe from Orangette for a long time. I’m not sure why I kept stalling – maybe because it calls for sour cream, which I don’t keep on hand and I have to go to a specific grocery store to get the lactose-free kind. But anyway, this was really good! The first time I made it, it came out darker and denser than I was expecting. So I made it again, this time making sure to use white flour instead of white whole wheat flour and baking it at a lower temperature while tenting it with foil. The latter precautions might have been too much, but the result was indeed better the second time around (albeit not as beautiful as Molly Wizenberg’s pale golden creation on her original post). The texture is a bit dense, with no crumbs when you cut into it; the cake will cave in the middle, and that’s a feature, not a bug. We really liked this one, though, and I’ll have to make it again!

In a small bowl, mix together sour cream and baking soda.

In another bowl, whisk together the flour and salt.

In the bowl of an electric mixer fitted with the paddle attachment, beat the butter and sugar until fluffy. Add the almond paste a few pieces at a time, and beat on medium speed for 8 minutes. (Molly Wizenberg admits that this seems like a long time, but do it. The mixture will get gorgeously fluffy.) Beat in the egg yolks one at a time, and mix until incorporated. Beat in the almond extract and the sour cream mixture. Reduce mixer speed to low, and gradually add the flour mixture, beating just until combined. Using a rubber spatula, fold the batter a couple of times to make sure there’s no unincorporated flour lurking around.

Scrape the batter into the prepared pan, and spread it evenly with the rubber spatula. Bake for about 1 hour: the cake is done when you press the top and it returns to its shape, and also when it shrinks from the sides of the pan. In my case, 55 minutes was too much; I’d try 45 minutes next time. (When I tried it again at 325 °F, I left the cake in there 45 minutes covered with foil, then removed the foil and baked it until it was done, 25 minutes longer. You could just try it at 325 °F without any foil.) Transfer to a cooling rack, and cool the cake in its pan. 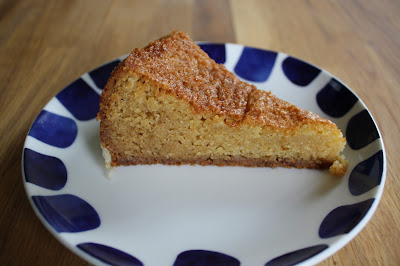