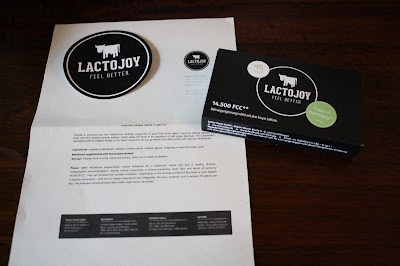 A while back, I was approached by the Head of Social Media Marketing for LactoJoy, a German brand of lactase supplement. They wanted to send me a free sample and hear my thoughts. I accepted, and then of course it took me a while to test it, what with having a new baby and all. But I finally got around to writing a post! So all opinions here are mine, though the product was given to me for free.

[If you need a refresher on definitions and mechanisms of lactose and lactose intolerance, please read this post on lactose intolerance (according to Blogger, it’s my second-most popular post to date – I couldn’t tell you why chocolate babka is first).]

One of the characteristics of LactoJoy is that it has a high FCC, (14,500 FCC lactase units per tablet), as compared with only 3,000 per Lactaid tablet. FCC stands for Food Chemical Codex; the higher the FCC, the more lactase enzyme. It takes roughly 1,000 FCC lactase units to break down 1 g of lactose, depending on the individual. And to be clear: I had a preferred kind of lactase tablet, specifically Lactaid Original (not the Extra Strength, not the Fast Act, certainly not other brands), because I had figured out exactly how to dose it for the foods I eat the most. The standard dose of Lactaid Original is 3 tablets, so 9,000 FCC lactase units – LactoJoy’s dosage is much higher. My worry was that with such a high dosage of lactase, I’d experience negative side effects from taking too much. After all, that is the case with Lactaid – too little and you risk symptoms like diarrhea from your lactose intolerance, but too much and you might end up constipated. However, it turns out that this is usually due to other additives in the pills, not to the lactase enzyme itself. Since LactoJoy contains almost just lactase and potato starch, this isn’t an issue. I can confirm that I’ve tested it on many occasions, and I haven’t had any problems whatsoever! This makes it so much easier to dose, because there is no overdosing, and underdosing would be rare indeed. It’s actually one less thing to worry about, and it wasn’t until using LactoJoy that I realized I’d been taking that worrying for granted, but LactoJoy is so much more pleasant in that respect.

The tablet itself is very small (perhaps too small for the scoring line to be very useful). It can be chewed, though I find that the potato starch gets caught in my molars and it takes a while for my tongue to work it out before I dare eat dairy. The taste is neutral, not sweet like Lactaid. The tablet is small enough that it can easily be swallowed, though, even by people like me who have trouble swallowing pills, so that’s what I do now. (For reference, the website describes them as having a 7.5-mm diameter and a 4-mm thickness. Here are photos of it next to a ruler, and next to a Lactaid Original tablet.) 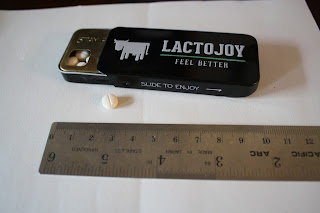 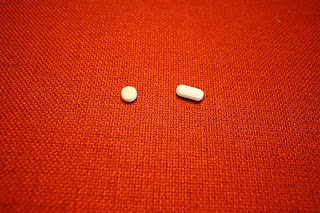 The scoring line would come in handy for medication. I personally do take prescription meds (on an empty stomach) that require a single Lactaid tablet; with LactoJoy, I’d probably use a pill cutter to get a bunch of half-tablets and store those with my medication.

What really stands out about LactoJoy, though, is the design of the box, which is a modern-looking black tin. It looks like a box of mints, certainly not like the bottle of medicine I carry with me everywhere! I’ve gotten so used to carrying a bottle of Lactaid for nearly half my life that I’ve basically gotten used to it, even though there is a certain social stigma with taking out meds at mealtime in public. I’d MUCH rather have a tin of LactoJoy handy!

The box I was sent is this one, which contains 45 tablets, though it comes in a larger size as well. The box itself has an ingredient list in German, despite its English cover and tagline (Stay Fresh!), but it comes with a printout of the information in English (this is available on the website as well). As for the price, it is very competitive (€12.99), and larger quantities offer a better value. With the exchange rate as I type this, it comes out to $13.89 for the box, meaning $0.31 per tablet/dose; to compare, I buy my Lactaid Original at $17.34 per 120-tablet bottle, which comes out to $0.43 per 3-tablet dose. Shipping is free within the E.U. via Amazon, but unfortunately for those of us in the United States, we are SOL. As far as I could tell, none of the Amazon vendors deliver to North America! For what it’s worth, the company spent €6.20 (about $6.63) on postage to get it to me via registered mail.

In conclusion (and for those of you thinking “TL;DR”): If LactoJoy were available in the U.S., I would absolutely switch brands and buy that instead of Lactaid. If LactoJoy finds a distributor that ships to North America, I’ll even consider paying more for the shipping to buy this because I like the product so much. I really hope this becomes an option! 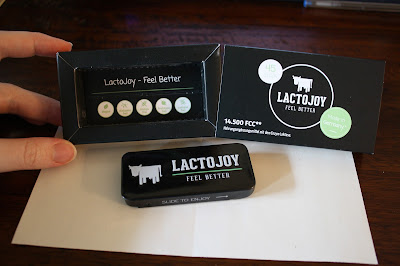 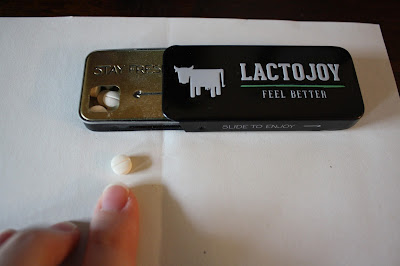 Hi, I don't know if this will be relevant but if you'd still like to buy LactoJoy please visit amazon.de : https://www.amazon.de/gp/offer-listing/B0185RLZH6/ref=dp_olp_new?ie=UTF8&condition=new Select the one that is sold and fulfilled by LactoJoy (they do ship internationally).

That is absolutely relevant! It's funny, because literally just this week I ordered some shipped to a relative in France for her to send to me. I'll be using this option in the future, thanks so much! :)