Since I got to Montreal in June, I had time to try several rhubarb recipes this year (for some reason, rhubarb was unavailable in San Antonio this spring). I tried it in savory applications, like a sauce served with roasted pork and in a chicken salad, where it was finely sliced alongside celery (both of those recipes are from the July 2015 issue of Coup de Pouce, but I can’t find them on their website). I also made rhubarb soda; my recipe for rhubarb syrup was a hybrid of this regular one and that vanilla one; it was great, but I have no pictures. Of the two remaining recipes that I thought of posting, one was a rhubarb upside-down cake. It was certainly the most photogenic of the two, but even then, I would have needed to be a food stylist with access to a few pounds of reddish-pink rhubarb to make it as nice as in the original photo – I did what I could with my limited green and red pieces. It was good cake, though! 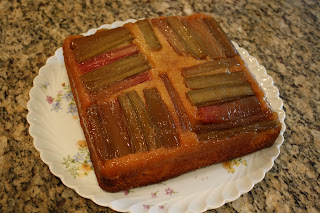 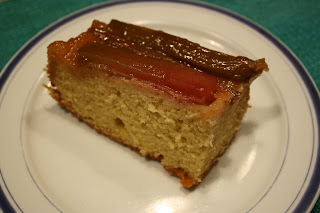 The recipe I will post is not photogenic, but I don’t care, because it was by far the best rhubarb recipe I made this year. It’s Dana Cree’s rhubarb compote, which I found on Orangette last year. I hope you won’t mind too much that I’m sharing it after rhubarb season, since you could actually make it with frozen rhubarb. I had it with yogurt and it was fantastic; it would also be good with lactose-free ice cream, or pavlova, or maybe even on crêpes or the like.

In a medium bowl, toss the rhubarb with the sugar. Set it aside while you melt the butter in a heavy medium saucepan over medium heat. When the butter has melted, add the rhubarb, the sugar, and the orange liqueur. Allow to cook, undisturbed, for about 2 minutes, until the rhubarb begins to release its juices. Then gently stir, and continue to cook over medium heat, stirring occasionally, until the rhubarb is very juicy and those juices begin to thicken. The compote is ready when the rhubarb is tender and beginning to fall apart and the juices look thick, about 10 to 15 minutes. (This is a cook-it-until-it-looks-right-to-you situation: trust your judgement.)

Store in an airtight container in the refrigerator, and serve cold, cool, or warm. 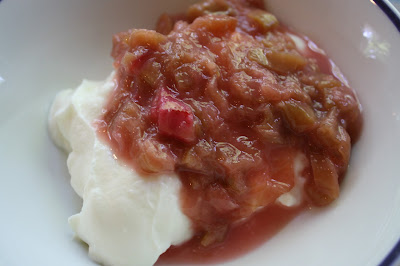