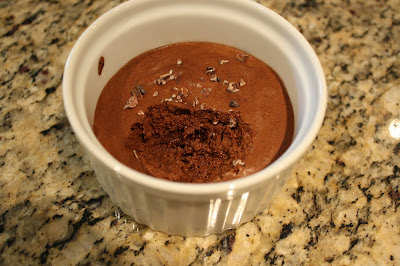 I had been trying to get this recipe right for a while, before sharing it. There are many variations floating around out there, especially in French (which makes sense, given that both chocolate mousse and aquafaba are originally French). It took some converting, as French recipes usually call for a Lidl brand can of chickpeas, which I obviously don’t have. With a little digging, I found that a standard Lidl can is 400 grams, which corresponds roughly to the 15-ounce cans we have here, and that’s roughly ½ cup of aquafaba (though I once got almost 2/3 cup from such a can). You can watch this video for a basic how-to.

The main problem I ran into was that the mousse didn’t hold. It sometimes liquefied after only a few hours, but even in the best-case scenario, it never held more than a day. I had looked at recipes such as these two in French and these two in English. I remedied blandness by doubling the amount of chocolate, which helped with consistency a bit, but it still fell way short of my expectations. So I started experimenting with a tip I found on the Facebook page of the inventor of aquafaba: microwave a slurry of cornstarch and water, then mix it into the mousse, and it will act as a stabilizer. Unfortunately, without knowing exactly how to do it, it proved to be a very frustrating exercise. If you don’t microwave it long enough, the cornstarch doesn’t get activated, but if you microwave it too long, it turns into a gel or a solid and then you can’t mix it properly into the mousse! By that point, I’d had enough, so I shelved this idea for a while.

Then, over the summer, Clotilde Dusoulier published her version on Chocolate & Zucchini, in which she simply uses cream of tartar as a stabilizer, the same as one would use for egg whites. The recipe makes 6 servings, and somehow, one lone ramekin was still in the fridge on the third day – I can attest that the mousse was still airy and solid. As a matter of fact, the pictures of the mousse in the cup below were taken on the second day, and as you can see, the texture is still perfect! (The ramekin at the top of the page was eaten later the day the recipe was made.) Her recipe is below. I would of course caution you to use very good chocolate, as that will be the dominant taste. By that time, in Montreal, I had switched to the large, plain tablets of chocolate found near the candy section but so large that I can only imagine baking as their use, such as Lindt – not my favorite, but better here than Baker’s. One thing I love about this recipe is that it uses the same amount (by weight) of chocolate and aquafaba, so you can use whatever the yield of your can of chickpeas is and then adjust the amount of chocolate accordingly, instead of opening a second can for a few tablespoons’ worth!

Have ready 6 ramekins, glasses or cups, with a yield of about a ½-cup each.

Pour the aquafaba in a clean mixing bowl and set aside.

Place the chocolate in a double boiler and heat until just melted. Set aside and allow to cool for a few minutes.

Using an electric mixer or the whisk attachment of a stand mixer, whisk the aquafaba, salt and cream of tartar to soft peaks (this should take only a few minutes).

Gently stir a third of the whipped aquafaba into the (cooled!) melted chocolate, until fully incorporated.

Fold in the remaining aquafaba in two additions until fully incorporated, using a spatula and lifting the mixture in a circular up-and-down motion to avoid deflating it.

Pour into the prepared cups, level the surface with a spatula, and sprinkle with cacao nibs.

Transfer to the fridge and allow to set for at least 2 hours before serving. 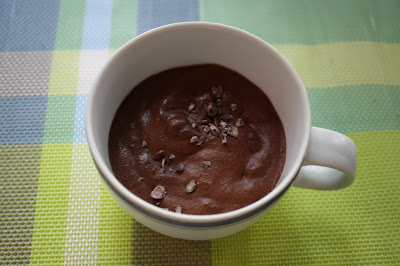 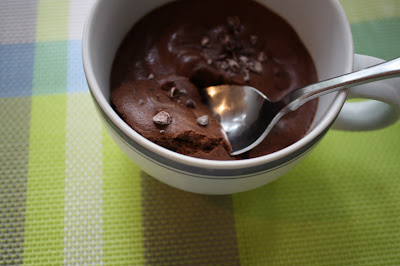 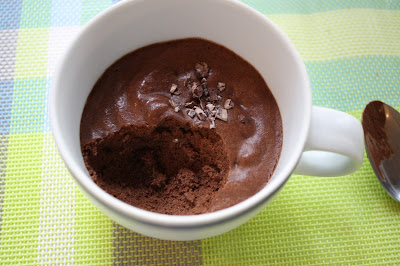