Part 2 of the breakfast quest

It’s remarkable how similar thoughts I’m having regarding breakfast, as compared to a year ago, when I wrote about a breakfast quest for a good pancake recipe. I had been trying a bunch of non-pancake recipes, some that didn’t work (like this fennel-honey granola, which forced me to admit I just don’t like the texture of granolas that contain peanut butter). Others worked really well, but my blog doesn’t need another recipe for vegan marbled banana bread. Or peanutella, with which I fell in love because it’s so fantastic (just keep it at room temperature), but I forgot all about pictures. And then I remembered that I never got around to testing the pancake recipes that call for whipping egg whites, so I decided to tackle that project. I tested three: recipes by Clayton Miller, Laurent Jeannin, and J. Kenji López-Alt (from Serious Eats). In all cases, the night before, I mixed my dry ingredients and left them on the counter, then mixed the wet ingredients and left them in the fridge overnight next to the egg whites. In the morning, to make pancakes, I whipped the egg whites and mixed everything together. I dislike using my stand mixer before breakfast, but for pancakes, anyone who is still sleeping in should get up on the right side of the bed regardless.

Laurent Jeannin’s pancakes, while pretty, were very dry and not that good. I only got 6 pancakes out of the batch. Perhaps this French chef would be better at crêpes than pancakes? In any event, considering how finicky this recipe is (weighing egg whites and yolks, anyone?), it just wasn’t a winner. 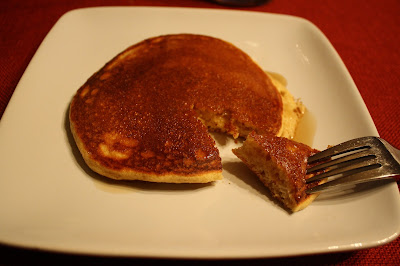 The most interesting recipe was Clayton Miller’s, which is actually for soufflé pancakes. (I heard about it via The Kitchn; their link is broken, but you can also find the recipe on Yahoo.) Each soufflé pancake is first cooked in a pan, then finished off in the oven. Because I have an inquisitive toddler in the way, opening and closing the oven door a few times for each pancake (especially given that I only had one oven-proof pan the right size) was not an option. I did make one as instructed, for scientific purposes, but the rest were made strictly in a pan, the old-fashioned way. I have to admit, though, that the baked soufflé pancake was a thing of beauty. It was certainly one of the best pancakes I’d ever had, and if at all feasible for you, that’s how I recommend making them. The yield is about 6-8 pancakes done the soufflé way, or 24 pancakes cooked stovetop (they freeze well); one soufflé pancake would be enough of a serving for me.

Combine dry ingredients in large mixing bowl and set aside.

In a medium bowl, combine the milk, buttermilk, whole eggs, and egg yolks and whisk together until combined. Slowly stir the wet ingredients into dry ingredients. Do not over mix (this makes the pancakes tough). Set aside.

In a separate bowl, whisk the egg whites to medium peak then fold gently into the batter. Do not over mix.

Melt a tablespoon of butter in a 6-inch nonstick frying pan on medium. Swirl to coat sides. Butter should be golden and bubbling, but not brown or smoking. Pour one cup of batter into pan. You can add more or less depending on how thick you want the pancake. It will puff up, so don't fill pan more than ¾ of the way up the sides. Cook on the stovetop for one minute then place in the oven for 3 minutes. Flip pancake and place back into oven for about 2 more minutes or until cooked through (mine was still slightly underdone in the center after 2 minutes). Add more butter as necessary to coat pan and repeat. (You can also cook them entirely on the stovetop like regular pancakes, in which case you’d want to use closer to ¼ cup of batter for each pancake. Pictured first is the soufflé pancake, followed by the stovetop version.) 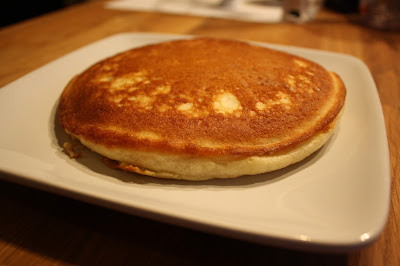 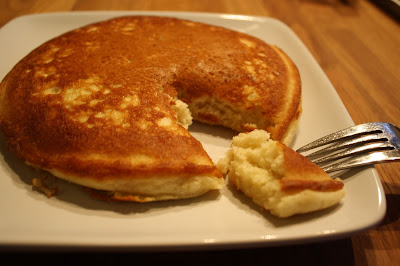 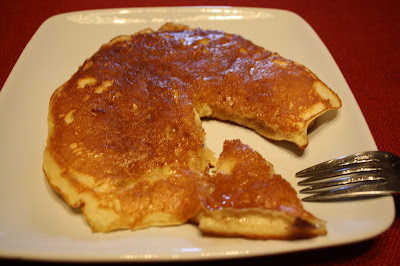 The third recipe I tried, Serious Eats’ Light and Fluffy Buttermilk Pancakes, was also a winner. That recipe calls for sour cream, which I’m sure you could replace with Greek yogurt, especially given that you don’t really taste it in the finished product. The original recipe also says it can be replaced with buttermilk. These are easier than the soufflé pancakes, so that may guide your choice on most mornings.

For the dry pancake mix
Combine flour, baking powder, baking soda, salt, and sugar in a medium bowl and whisk until homogenous. Transfer to an airtight container. The mix will stay good for 3 months.

For each batch of pancakes
Place one batch of dry mix in a large bowl.

In a medium clean bowl, whisk the egg whites until stiff peaks form.

In a large bowl, whisk the egg yolks, buttermilk, and sour cream until homogenous. Slowly drizzle in the melted butter while whisking. Carefully fold in the egg whites with a rubber spatula until just combined. Pour the mixture over the dry mix and fold until just combined (there should still be plenty of lumps).

Heat a large heavy-bottomed nonstick skillet over medium heat for 5 minutes (or use an electric griddle). Add a small amount of butter or oil to the griddle and spread with a paper towel until no visible butter or oil remains. Use a ¼-cup dry measure to place 4 pancakes in the skillet and cook until bubbles start to appear on top and the bottoms are golden brown, about 2 minutes. Carefully flip the pancakes and cook on the second side until golden brown and completely set, about 2 minutes longer. Serve the pancakes immediately, or keep warm on a wire rack set on a rimmed baking sheet in a warm oven while you cook the rest (about 12 in all). 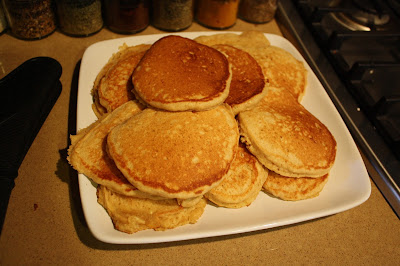 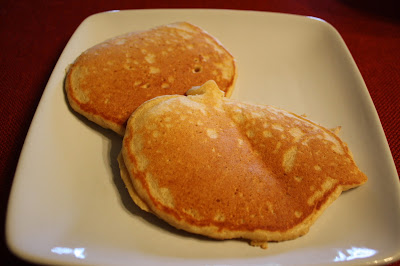 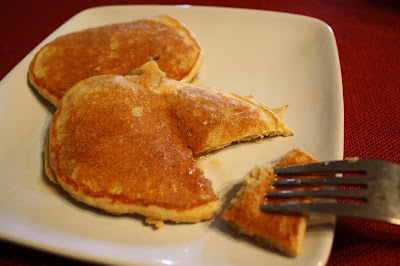