On VermontFest 2015 and egg substitutes

My friends and I recently had our annual summer get-together, which was in Vermont this year, so it felt like going back to our roots. Like some parts of Quebec, Vermont has beautiful scenery, with lush green hills and mountains in the distance, and lakes and rivers to boot. We spent a morning at the ECHO Lake Aquarium and Science Center in Burlington. I highly recommend it if you have kids, though it was incredibly crowded when we were there (probably because it was rainy and everyone decided to spend the day indoors like us). We also made a quick outing to Boston Post Dairy Farm, where I tasted some delicious aged goat cheese called Eleven Brothers – lactose-free as far as I can tell. 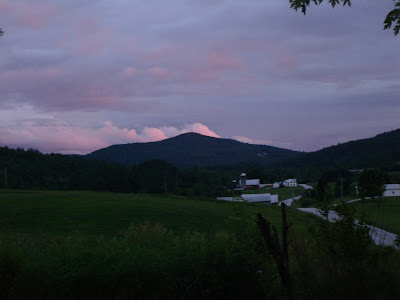 We did a cookie taste-off this year again, but with a twist. Since our friends’ daughter is severely allergic to eggs, we had decided to test a few vegan recipes. But there are tons of egg substitutes out there and I, for one, didn’t know which one is best in a cookie recipe. I’d heard about flax seeds and chia seeds, corn starch (and for cakes and the like there’s yogurt, peanut butter, bananas, avocados or applesauce), plus harder-to-get ingredients like agar-agar or soy protein, in addition to commercial egg replacer. What to choose? So Jen had the brilliant idea of making variations of the 36-hour cookie (our returning champion two years in a row): one batch with eggs, and three vegan batches with three different egg substitutes. All other ingredients were exactly the same, and for the record, the butter substitute was Earth Balance soy-free margarine sticks and the chocolate was Callebaut’s dark chocolate discs. The cookies went directly from the freezer to the oven for 12 minutes at 350 °F and were sprinkled with Maldon sea salt. The substitutes we chose were aquafaba, flaxseed meal, and Ener-G brand egg replacer (which is basically a mix of potato starch, tapioca starch and leavening). In the picture, from left to right, you can see the prepared Ener-G, the aquafaba and the prepared flaxseed meal. 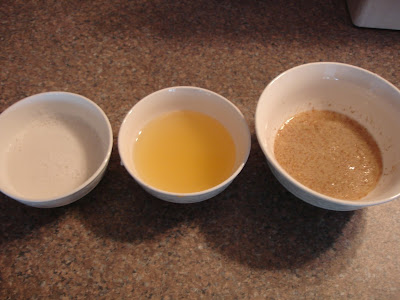 If you’ve never heard of aquafaba, let me catch you up: the word is Latin(ish) for bean water, and it’s the liquid from a can of chickpeas (people also call it chickpea brine or chickpea juice). I first heard about this last spring in what seemed at the time like a magic trick: apparently, this liquid can be whipped and behaves just like egg whites (and this discovery is credited to French chef Joël Roessel). This means you can make vegan meringues, people! I had been meaning to try that, but hadn’t gotten around to it yet. The foam has a tendency to separate if it is left raw, but apparently, if you mix 1 tablespoon of cornstarch and 3 tablespoons of water and microwave it for 40 seconds, then mix that into the aquafaba along with the sugar, it acts as a stabilizer. (I’ll report back when I try it.) You can read more about it here (that first link has a meringue recipe) and here. As you can imagine, this makes it a good ingredient for people with egg allergies as well as vegans, but it also allows for things like chocolate mousse for pregnant women and those with a weakened immune system, for example. There are so many possibilities! In the case of these cookies, we used 3 tablespoons of aquafaba (not whipped, just straight from the can) per egg, so 6 tablespoons total. 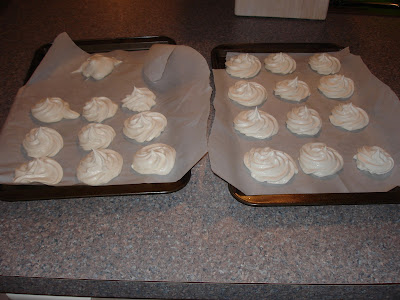 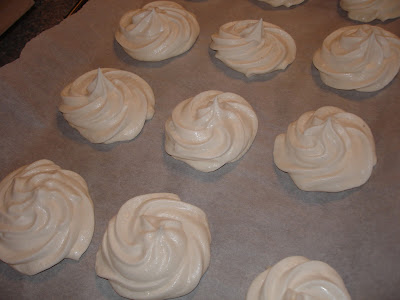 With the leftover liquid from the can, Jen made meringues, which I present to you here. The liquid whipped up like magic! I tasted it both raw and once baked into meringues, and I can attest that it doesn’t taste at all like chickpeas. It’s actually pretty bland, and the sugar makes the meringues sweet. I though perhaps the meringues were a bit grainier than egg meringues, and the Engineer felt the taste was slightly malty (I didn’t). One man in our group, the Legal Chef, is opposed by principle to any recipe that is not traditional (it’s not a matter of results with a recipe, just truly a matter of stubbornness on his part regarding “proper” technique and ingredients). To him, “traditional” in this context means French-style baking with lots of butter and eggs. So we had him taste the meringues without saying anything, and he called them “perfect” (his word, not mine). When we told him that they contained a special ingredient, he was sure that it was lemon juice (no, actually, we had used white vinegar). And then Jen told him about the aquafaba, and I saw the moment his mind exploded (because he actually shook first his head, then his whole body, because basically his entire belief system collapsed). He tried to backpedal by saying he was no meringue connoisseur, but his wife stepped in to say that SHE was and she loved these vegan ones. Even though I’ve seen the whole process, it’s still a bit mind-blowing to me. (Then again, once upon a time, I’m sure someone must have thought the same after looking at what happened when egg whites are whipped? I mean, whose idea was that, anyway?) For those interested in trying aquafaba, chickpeas seem to be the most commonly used bean, but I’ve heard of people using white beans, for example, so perhaps it works with legumes in general. That being said, chickpea brine whips up really white and I’d recommend that for meringues, and perhaps save the black bean brine for chocolate mousse.

As for the cookies, we labeled each batch with a letter and had people rate them on a scale of 1 to 4, with 1 being the best and 4 being the least-best. We only revealed the contents of each batch after they had been rated. (And to be clear, the kitchen was decontaminated after the egg batch was made, and those cookies were only baked after the allergic child was in bed; the kitchen was decontaminated again after the cookies were eaten, and there was no cross-contamination.) The cookies made with eggs were, once again, the clear winners. The Actor said they were the ones with the most flavor, and he called it a “strident” egg flavor. Those cookies were also cakier, which I love because I want my cookies chewy. My second favorite was the batch with the Ener-G egg replacer, and it came out as the overall favorite vegan version. Those cookies were most similar to the egg ones, albeit it a bit drier (though when they were freshly baked, this was in no way pronounced enough to be unpleasant). The cookies made with flaxseed meal were my least favorite, as they were flat and crisper, in addition to being darker. (We think this is because flax introduced more fat than the other substitutes.) Their taste was described as “nutty” by some. As for the Legal Chef, he declared that the flaxseed cookies were by far his favorites, and that he wouldn’t even bother rating the others because batch B was his perfect cookie. (And then we told him that they were vegan and even though he was disappointed with himself, he stuck by his choice.) In the pictures below, batch A is made with aquafaba; batch B, with flaxseed meal; batch C, with Ener-G egg replacer; and batch D, with eggs. On the plate, clockwise from top left, they are from batches A, B, D, and C respectively. (I'm including both the pictures with and without flash because even though flash is bad, lighting was worse.) 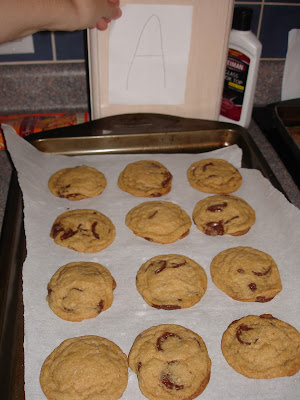 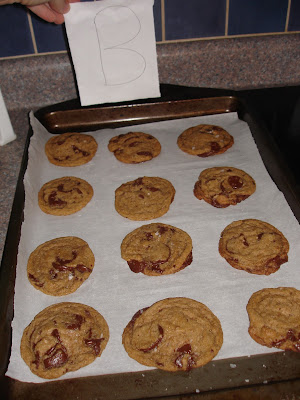 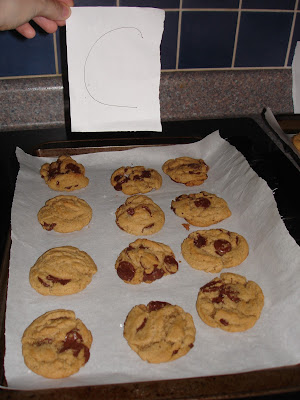 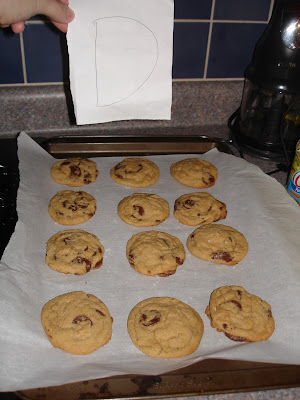 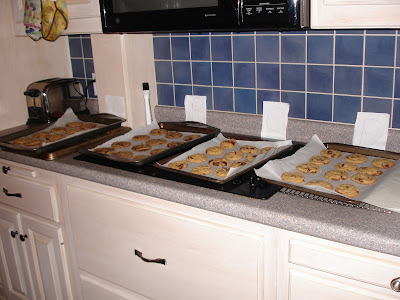 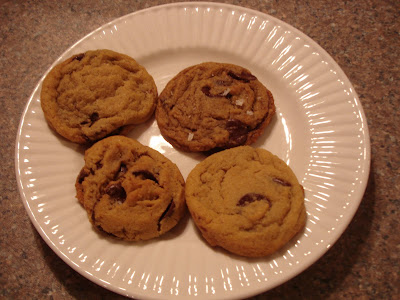 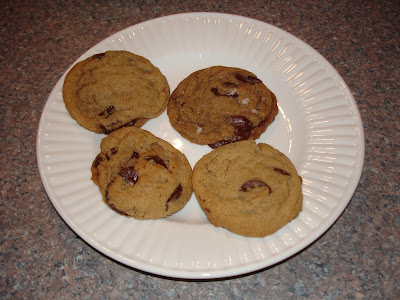 So overall, the egg cookies were voted best, the Ener-G cookies were second best, the aquafaba cookies were in third place, and the flaxseed meal cookies were a close fourth. To sum up the details without boring you with every single person’s rating, I’ll assign a point value to each rated position (1 point for 1st position, to 4 points for 4th position), so that “better” cookies have FEWER points. If I add up all the points awarded to the cookies by 10 adults (so not including Danny, who this year again declined to rate them, and not including the Legal Chef who only crowned a winner and did not rate the others), I get 15 points for the egg batch, 24 points for the Ener-G batch (they were favorites only for Anna R. and Elinore), 30 points for the aquafaba batch (they were nobody’s favorites, though), and 31 points for the flaxseed meal batch (Pascal was the only other person who rated them as his favorites, besides the Legal Chef). Also, in the interest of science, the Actor has tested it again and confirms that these cookies are better with flaky sea salt on top. So there you have it. The 36-hour cookies will be making an appearance in the next taste-off to defend their title. I’m wondering whether I should pit them against my Neiman-Marcus cookies…
Posted by Amélie at 12:25 PM