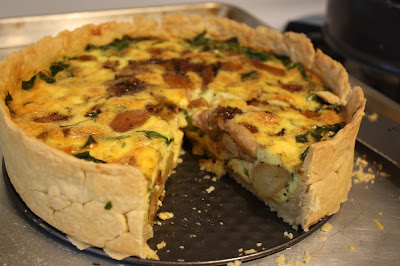 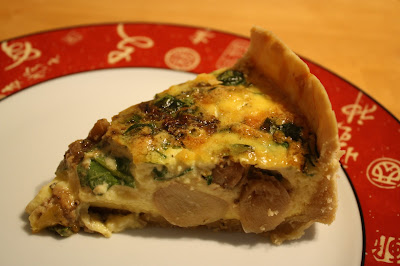 Bon Appétit calls this a tart, but I’ve been referring to it as a quiche. It takes some advance preparation, because you have to make your own crème fraiche by putting 1 cup of lactose-free cream and 1 tablespoon of lactose-free plain yogurt (or Greek yogurt) in a jar, shaking it and leaving it at room temperature for 24 hours, or until it thickens. It’s not complicated at all, but you do need to plan ahead. I managed to make the dough by hand, without a food processor, so don’t let a lack of equipment stop you! Since I don’t have a good pie dish here, I ended up using a 9-inch springform pan, to make sure I had enough depth for the filling – perhaps using two tin pie plates would have been an option as well. With a good stoneware pie plate, I would have had enough room and enough dough left over to make a decorative braided border, but this was delicious nonetheless. Actually, the first night I had it, I thought it was the best quiche I’d ever eaten, but the leftovers weren’t as good for some reason (maybe I should have warmed them up in the oven). The Engineer liked it, but thought that the cloves of garlic should be chopped instead of whole. I think that would defeat the purpose a bit, because they’re what makes the dish, but I can understand that he doesn’t like biting into them. I suppose if you wanted, you could chop them (or even purée them) before adding them to the filling, and it would still retain the caramelized flavor. Either way, this was a make-again dish, hearty and delicious and with plenty of leftovers!

Place a rack in lower third of oven; preheat to 350 °F. Roll out 1 disk of dough on a lightly floured surface to a 14” round. Transfer to a 9”-diameter pie dish. Lift up edge and let dough slump down into dish. Trim, leaving about 1” overhang. Fold overhang under. Freeze 15 minutes.

Beat 1 egg in a small bowl. Brush edge of dough in dish and bottom sides of braids with egg. Arrange braids along edge, trimming and gently pressing sections together as you go. Freeze 15 minutes.

Meanwhile, blanch garlic in a medium saucepan of boiling salted water until beginning to soften, about 3 minutes; drain. Wipe saucepan dry and heat oil in pan over medium-high. Add garlic and cook, stirring occasionally, until cloves start to turn golden brown, about 2 minutes. Add vinegar and water and bring to a boil. Reduce heat and simmer until garlic is tender, 10–12 minutes. Add maple syrup, rosemary, and thyme, and season with salt and pepper. Cook, stirring occasionally, until liquid is syrupy and coats garlic, about 5 minutes.

Scatter cheese over crust; top with spinach. Whisk crème fraîche, cream, and remaining eggs in a medium bowl; season with salt and pepper. Pour over spinach. Add garlic with any syrup. Bake until custard is set and golden brown in spots, 35–40 minutes (mine took a whopping 70 minutes, but it was deeper than a regular pie). Let cool on a wire rack. 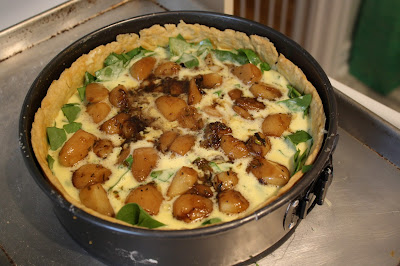 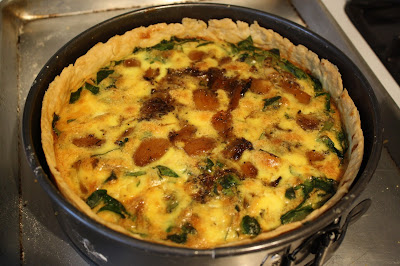 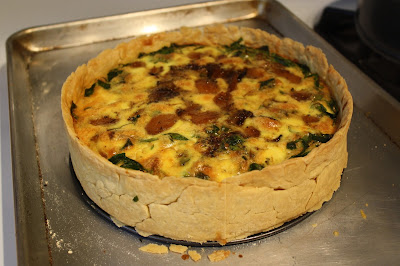 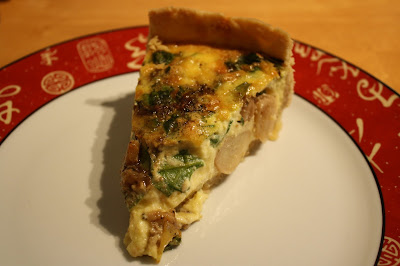