I’ve finally finished writing about our outings of March, April and May, so here are the highlights. (I’ll talk some more about our June trip in a later post.)

In March, we visited Brackenridge Park (map here if you’re curious). We didn’t even see the whole thing – for example, we’re saving a visit to Kiddie Park, the oldest children’s amusement park in the country, for when the Little Prince is older. And we weren’t really into barbecuing (though late March was early enough that there were still picnic spots open before lunch). The highlight of the visit, though, was riding the train through the park! The whole ride is about 20 minutes long, and tickets are $3.50. We got to see parts of the trails, the golf club, attractions like the zoo and the Witte Museum, and there’s even a tunnel and two bridges. And don’t miss driving into the park itself, because you actually drive through the water to get there, and it is unspeakably fun. (The area is marked off with cement blocks, to keep debris and fowl like ducks and egrets off the road.) We also made a little stop at the Japanese Tea Gardens, because the Engineer hadn’t seen them – and I wanted to see them in a month other than February! They were nicer in March, though I don’t think that they were at their best yet, so I’ll have to figure out what time of the year that is. 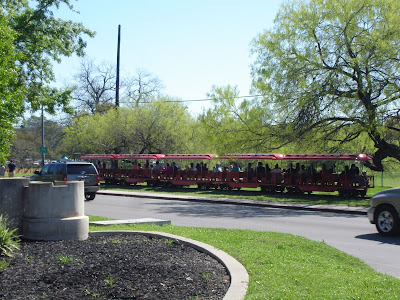 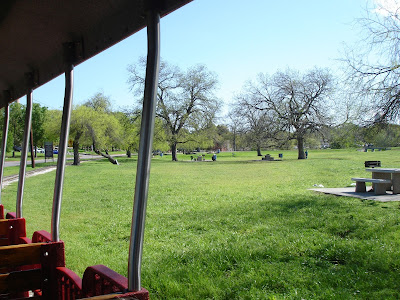 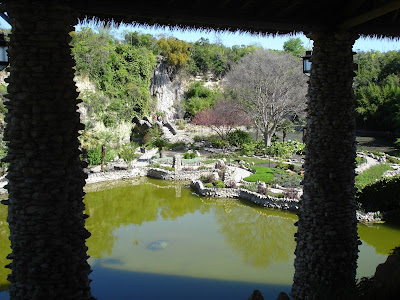 In April, we went to the Poteet Strawberry Festival, which I’d been hearing about for years. The main draw for me is that I miss good strawberries, and the seasonal ones from Poteet are known to be good (as a matter of fact, they are the only good ones I’ve had in Texas on the rare occasion I’ve seen them at the grocery store). The festival itself, though, was not what I’d imagined. There was a petting zoo that was a lot of fun, and emu races, and big metal strawberries at the entrance, but the rest of the festival was basically interchangeable with most. Lots of carnival rides and games and live music, usual festival fare plus an unusual (for us non-Texans) amount of barbecue pits and smoke everywhere, as well as a few stalls serving strawberry shortcake, strawberry lemonade or chocolate-dipped strawberries. Only one little corner of the festival grounds had fresh strawberries for sale, and they were more expensive than I had thought (I got a half-flat for $18; see here and here for recipes). For the record, they were better than out-of-season strawberries, but not as good as seasonal Quebec strawberries. I also used this occasion to eat my first Frito pie: I got the plain version, but there are also some with cheese, sour cream, green onions or jalapeños, and it is sometimes served straight in the bag. For the record, it wasn’t that great. It should be noted that while there are a few covered areas in case of rain, the covered picnic tables were all wet anyway. We still had a good time, and honestly, I prefer that to the beating sun all day. For those of you considering the festival next year, be careful not to fall for the vendors outside the festival grounds: they advertise things like $10 parking, but parking is free on the grounds! Food and souvenirs may or may not be cheaper outside, but once you leave the grounds, you can’t reenter (which sucks). Buy tickets online, we saved $10 for two adults that way! 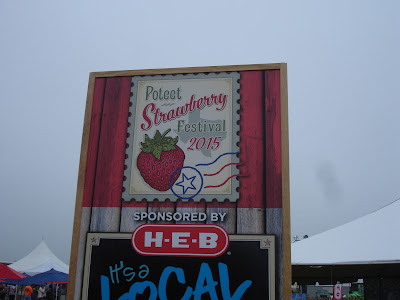 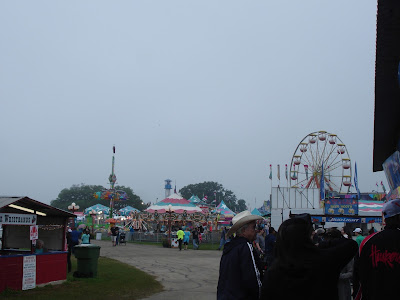 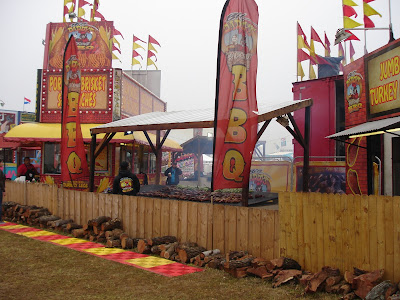 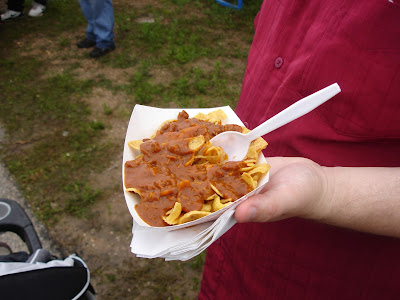 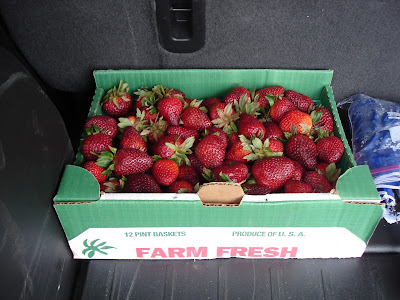 One of my favorite parts of the day wasn’t the festival itself, but the drive there: we were in the southernmost part of San Antonio and beyond, and there are wildflowers there like I’d never seen before. Up north, we get bluebonnets, but south, there were tons of (what I now believe are) Texas paintbrush flowers! They look coral in the distance, but up close, one can see they have pink sepals cradling white flowers with yellow pistils. Really beautiful! My specimen had wilted by the time we got back home, so I sadly couldn’t get a good close-up shot of it. 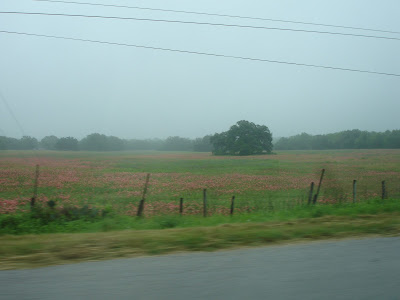 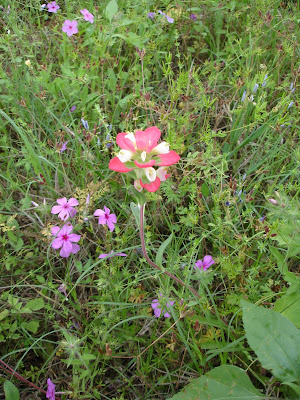 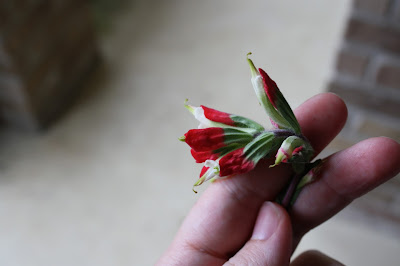 Finally, in May, we went to the San Antonio Zoo. This trip was not as fun as we had thought, because even though the Little Prince is much more aware of his surroundings than he used to be and even though he enjoys books and videos about zoo animals, it turns out he didn’t enjoy the *actual* zoo. I mean, it’s not that he was miserable or anything, but he didn’t find it interesting. I think that my biggest disappointment was that I had promised both him and the Engineer that they would get to see real live okapi, but the zoo changed some of the exhibits: there is now only one okapi pen instead if two, and zoo keepers were doing some maintenance work in the pen, so the okapi were nowhere to be seen. On the bright side, since we live here, we get to come back some other time. (This was my third visit, the Little Prince’s second, and the Engineer’s first; I could swear I wrote a post about an earlier visit, but for the life of me I can’t find it. Did Blogger eat it?) 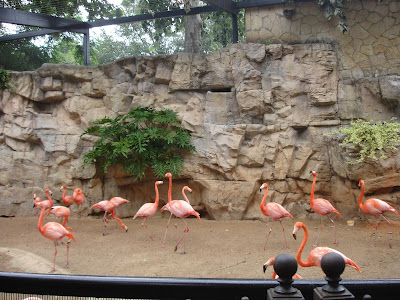 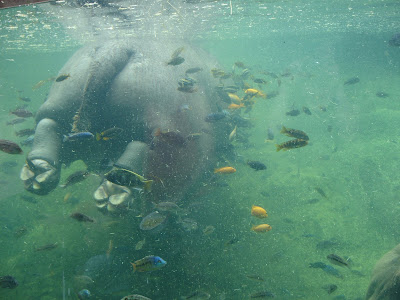 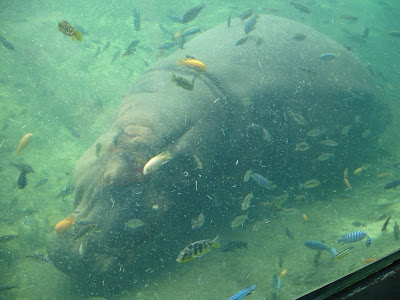 The San Antonio Zoo is not that big – you could easily visit all of it in under a day. My instinct was to go early on a weekday, but it turns out that’s when schools and day camps send the kids, so that’s not always the best plan. The zoo has an elephant, but I can’t help feeling badly every time I see it, because it is all alone in a pen mostly devoid of stimulation. They are planning on adding a giraffe exhibit later this year, with the possibility for visitors to feed the giraffes, and I’m really looking forward to that! The zoo has taken advantage of the rocky cliffs to create more natural-looking enclosures for the animals. Some of the exhibits are even large enough (and contain enough vegetation) that animals can be hard to spot: the cheetah, for example, was napping in a thicket of bamboo. In fact, of all the large cats, only one tiger was moving around. I blame this on the heat - it was only in the mid-80s, but it was humid and felt borderline too hot to me, and a lot of the animals were panting. Both of my previous visits had been in February, and I recall the animals being more active. 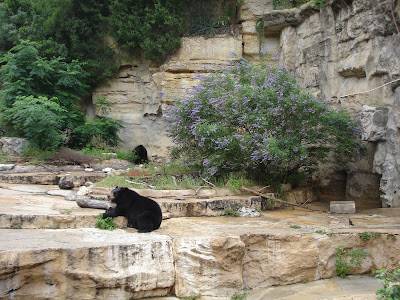 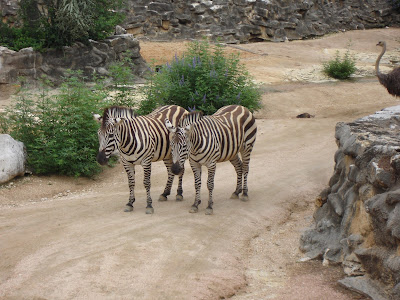 The price for tickets keeps going up, and I must admit that my first reaction was to feel like it had gone up too much (from $10 to $14.25 in 5 years, which is way more than inflation). That being said, the zoo celebrated its centennial anniversary last year and added a carousel as well as the Beastro, a sorely needed restaurant to complement the existing hot-dog stands. It’s nothing fancy, mostly burgers and lackluster pizza, but it’s clean and has a lot of indoor seating, including high chairs, as well as clean bathrooms. Actually, one of my favorite parts of the day was lunch, because we were sitting near a big window from which we could see great egrets and other water fowl flying around in the tall trees. Surprisingly, the egrets aren’t really part of the exhibits: they happen to nest in Brackenridge Park and come to the zoo to enjoy the grounds. The downside of that, as well as of the design of some of the aviaries there is no way around: watch out for bird poop. We got hit twice (once on a shoe, once on the stroller); wet wipes came in really handy. That being said, it remains a good attraction for visitors and locals alike, and we look forward to going back when the Little Prince is a bit older. 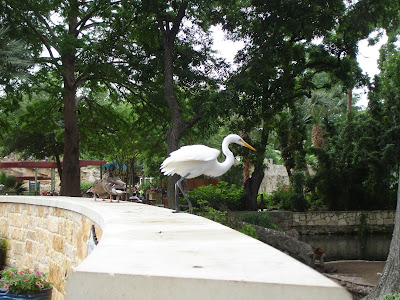 I believe a half flat at my market is 13$ this year (although it's cheaper than previous years; I think this year was a good year for strawberries) and a full flat is 25$. The ones from Ile D'Orleans were more expensive, though.

Right, and that's Canadian dollars. AND the strawberries I've had here (in season) were better than the Poteet ones. I don't think I'll be going there again.