On the road again

The Engineer, the Little Prince and I made the drive up to Canada the first week of June. Given that our dog is no longer with us, we were able to stop and visit a bit of Dallas and Memphis on the way, and it was really nice to have an actual vacation on this trip. We also got to eat lunch at indoor tables instead of via a drive-through window, and that was a nice change as well! And as a bonus, I got to set foot in an Aldi grocery store for the first time (and pardon the repost, but see here for the back story).

As far as eating on the road goes, we sadly didn’t get to try the new Lyfe Kitchen establishments, which I first heard about roughly 4 years ago; maybe another time. We did, however, finally go to Panera Bread. Somehow, even though we have them in San Antonio, we’d never set foot in one, probably because it sounds like a bakery and we weren’t looking for that. But, as it turns out, they have delicious healthy meals! I had a chicken Cobb salad with avocado, and it came with half a warm baguette, and the whole thing was just fantastic! There were a lot of other mouthwatering options (strawberry and poppy seed salad, Mediterranean chicken and quinoa salad, kale salad, roast turkey and avocado BLT sandwich, pasta primavera), in addition to bakery items. They even have a drive-through, so really, it’s a wonder we never stopped at one before. I will now be seeking them out, though! What a great discovery! Lest you think I’m a total health nut, I’ll point out that we also stopped at In-N-Out for the first time. I’m glad we tried it, but I don’t think I’ll be craving it over other fast food chains, while I will want Panera again. It should be said, though, that In-N-Out has an extensive off-menu and is known for being allergy-friendly (there are allergen-free options, as long as you ask, and all fries and burgers are nut- and peanut-free). 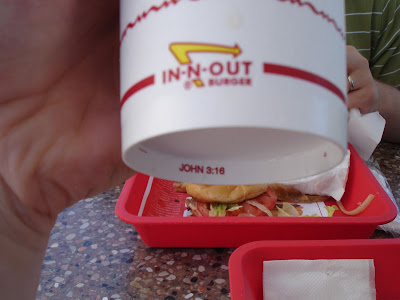 We also discovered a great restaurant in Dallas. We were in a bit of a bind for dinner, because it was Sunday night and all the restaurants near our hotel were closed. We were tired and we didn’t want to drive anywhere, so we ended up going to the one place that was open, the Rodeo Goat, even though it was burgers again and we didn’t really like the front or the inside décor. That being said, we went out to the back patio to sit: it was a really nice area in the shade, by the water, and there were fans with the occasional water spray to keep us cool, and I have to say that it was extremely pleasant! It was very informal, kid- and dog-friendly, and so much nicer than our first impression. It turns out that the burgers were absolutely delicious and nothing like fast food burgers. I took Lactaid and had the Nanny Goat (beef patty with goat cheese and garlic & herb mayo), while the Engineer had the Olivia Darling (beef patty with green olive tapenade, roasted red pepper mayo and herb cheese spread). We shared with the Little Prince. I highly recommend that place if you can sit outside!

In Memphis, I made it a point to stop at Central BBQ, where we tried the pulled pork sandwich: it had just the right amount of smokiness and sweetness in the sauce, undercut with some acidity from the cole slaw. The serving size was reasonable, too (as in, we were able to finish the sandwich and eat some fries and still feel good about ourselves), but if anything, we were a little sad once we’d finished that awesome sandwich. The best peanut butter chocolate pie we’d tasted made up for it, though! I should also mention that we were given a table right away and service was fantastic. 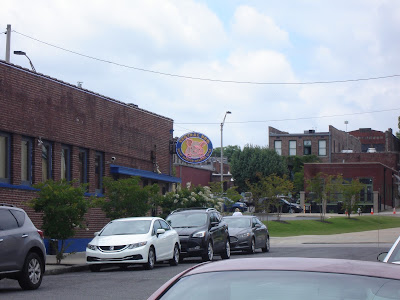 We still have our old stand-by, Captain Joe’s Grill in Whitmore Lake, Michigan. I’ve talked about it before on this blog (in French): this is a place that doesn’t look that promising from the outside, especially considering that it’s basically right off the highway, but it’s usually my favorite meal of the trip (we’ve been stopping in Whitmore Lake almost twice a year for a few years now, as we like walking on Main Street – this year was the first time we were there when the yarn store was open, more of that on another post). Captain Joe’s has your typical American fare of hamburgers, steaks and pizzas, but it also has a good selection of Mediterranean fare. I always get the trio plate with hummus, fatoush salad and (usually) falafel. It’s delicious on its own, but it’s especially good after several days on the road eating fast food!


As for sightseeing: we spent an afternoon in Dallas, where we made three stops that day. First, I wanted to see the chapel at Thanks-Giving Square. Its mission is to promote “the spirit and unifying value of giving thanks”; community members and visitors use the space to gather, meditate, or just find respite in the downtown area. We walked through some of the garden area, skipped the museum, and went right for the chapel with a spiral exterior that reminds me of a snail’s shell. The inside is particularly stunning because of its spiral stained-glass panels! We had to time our visit properly, because the chapel isn’t open often during the week. 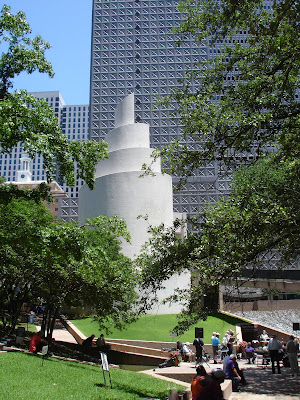 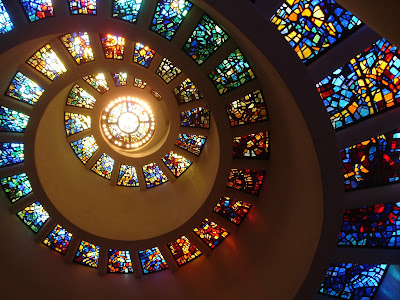 We made the almost-obligatory stop at Dealey Plaza, which is remembered as the place where President Kennedy was assassinated (but it was originally created to honor the memory of a few local pioneers). It is a major tourist attraction, and some people profit from it (like a man who offers the opportunity to have your picture taken in a replica of the presidential limousine in front of the Old Court House – we thought that was crossing a line). We were also surprised to see a big yellow banner clearly identifying the “grassy knoll”, two words that seem forever associated with the assassination. It was convenient to be able to place it, I suppose. The former Texas School Book Depository building now houses a museum, but otherwise looks the same. The most obvious difference to me was that the trees had grown enough to obstruct the view if the motorcade were to drive there today. I hear that there are plans to restore the Plaza to its exact appearance in 1963, which again seems a bit over the top… 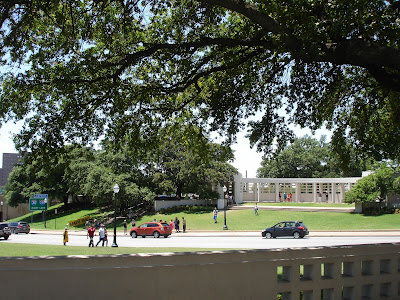 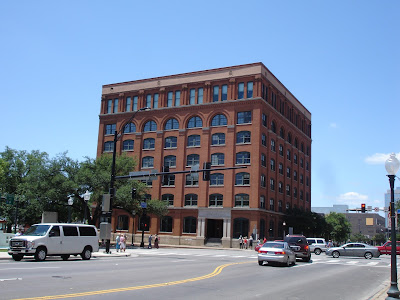 We then went to Pioneer Plaza, which is known for its bronze cattle drive. There are almost 50 bronze steers, standing at a larger-than-life 6-feet tall, along with a few riding cowboys. A new steer is added occasionally, and it is the largest bronze sculpture of its kind in the world. The plaza is also a very pleasant place to walk, with lots of shade, especially in the adjacent cemetery. The stream and limestone bluff make the sculpture all the more impressive and life-like. 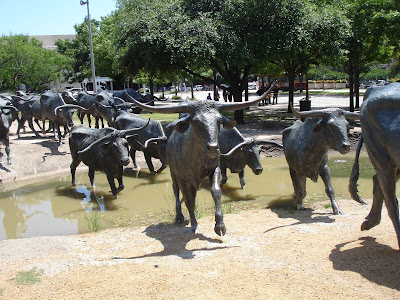 The next morning, we started the drive with a pit stop at Williams Square in Irving to see the Mustangs at las Colinas, a very impressive sculpture of mustangs running through the water. I particularly liked the small fountains nears the horses’ hooves, which really make it look like they are splashing in the water as they run! 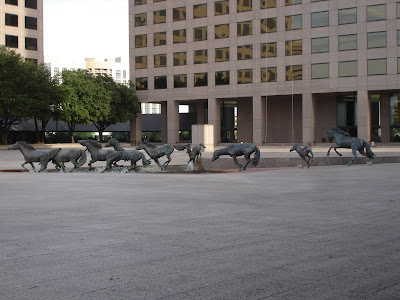 After that, we got a day to visit Memphis (well, half a day, really). We started off by standing in front of Sun Studio, which is officially remembered as the birthplace of rock’n’roll because that’s where Elvis Presley recorded his version of That’s All Right Mama in July of 1954 (but if you’re going to get technical, Rock Around the Clock was recorded a few months earlier by Bill Haley & His Comets). We then went to Graceland, which had been on my bucket list for something like 25 years – and that’s not making me feel any younger. That’s the place where I really felt like a tourist, because it’s so much more massive an industry than I thought! There are visitors from all over the world, and even though we got there a little after 9 am, the place felt like it was starting to get really busy. I thoroughly enjoyed my visit nonetheless, and I’m including two pictures of the “state-of-the-art” kitchen from the 1970s, because this is still a food blog. Also, sparkly suits, because Elvis. 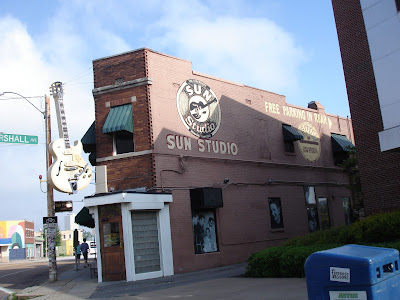 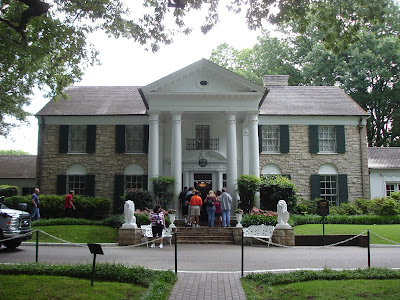 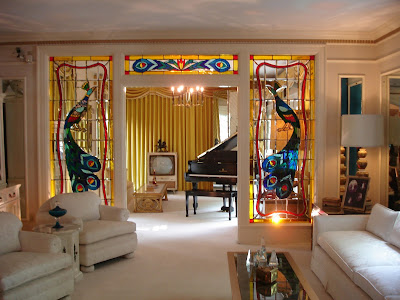 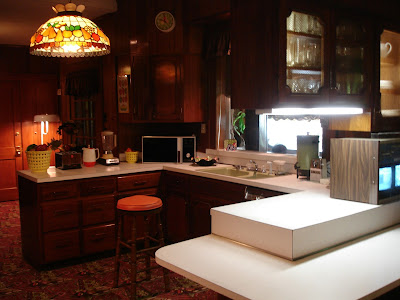 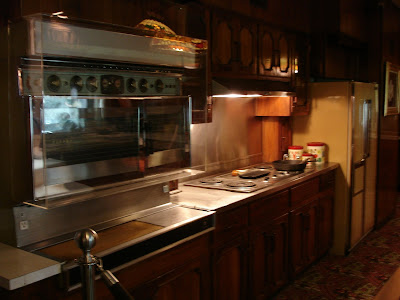 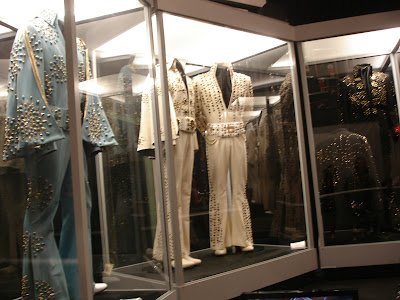 After that, we had lunch at Central BBQ (see above) and then we went to the old Lorraine Motel, which is now the National Civil Rights Museum. I’d love to visit it someday, but we had understandably reached the limits of the patience of the Little Prince, who was in need of a nap. It was a Tuesday, though, so the museum was closed, which meant that there was plenty of parking nearby. I realize this road trip sounds a bit like a death tour (“Hey! Let’s go see the places where Kennedy, Elvis, and Martin Luther King died!”), but we did a lot of fun stuff too, even though some moments were more solemn. Memphis actually has more that I’d like to see, such as the ducks at the Peabody Hotel, the zoo and the botanical gardens, all of which are tailored to kids, so many in another few years we’ll stop there again. 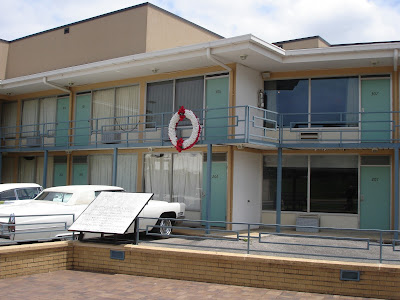