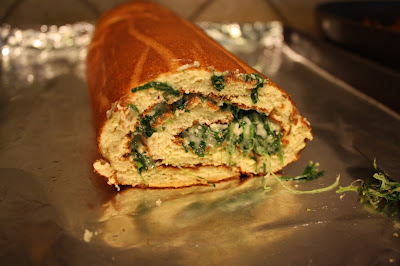 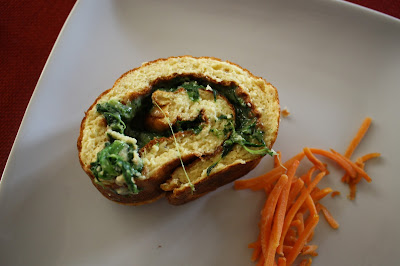 This recipe is from Cook’s Country. It wasn’t complicated to make, though it did take a while, as it has a few steps – I did most of the active work during the Little Prince’s nap, and put the whole thing in the oven before dinner. The result was impressive because of how well it can be presented, and it was delicious! (Well, the Little Prince didn’t like it for some reason, even though he has liked similar things in the past, but the Engineer and I give it two solid thumbs up!) I served it as dinner with a side of sesame carrots, but it would be great at a brunch, too.

For the soufflé
Adjust oven rack to middle position and heat oven to 375 °F. Line 18 by 13-inch rimmed baking sheet with 18 by 16-inch sheet of aluminum foil, folding excess over sides of sheet, and spray foil and sides of sheet liberally with vegetable oil spray. Top foil with two 16½ by 13½-inch sheets of parchment paper, allowing parchment to overhang one long edge of baking sheet by 1 inch. Spray parchment liberally with vegetable oil spray. (I used a rimmed baking sheet that I believe is 11”x17”, a sheet of tin foil, and a single sheet of parchment paper. Everything worked out very well with all the cooking times indicated, and there was no spillage whatsoever, so I’d do it again next time.)

Combine flour, butter, salt, and pepper in bowl and mash with fork to make smooth paste. Bring milk to boil in medium saucepan. Reduce heat to medium-low, whisk in flour mixture, and simmer, whisking constantly, until thickened, about 2 minutes. Off heat, whisk in parmesan; reserve 1/3 cup of milk mixture. Scrape remaining milk mixture into large bowl, let sit until slightly cooled, about 10 minutes, and then whisk in egg yolks.

Using stand mixer fitted with whisk, whip egg whites and cream of tartar on medium-low speed until foamy, about 1 minute. Increase speed to medium-high and whip until stiff peaks form, 3 to 4 minutes. Gently fold one-third of beaten egg whites into milk-yolk mixture. Using rubber spatula, fold in remaining egg whites until no white streaks remain. Spread mixture onto prepared baking sheet. Bake until golden brown and set, 22 to 24 minutes. Let cool in pan for 30 minutes (it will deflate a bit, and this is normal). Reduce oven to 325 °F.

For the filling
Combine reserved milk mixture, spinach, gruyère, chives, milk, pepper, and salt in bowl and microwave until hot, 1 to 2 minutes. Spread spinach filling evenly over cooled egg sheet. Using parchment overhang, lift long edge of egg sheet and roll to opposite edge (parchment should encase roulade when rolling). With roulade still resting on edge of parchment, pull roulade to center of baking sheet, and finally roll it off seam side down onto foil; discard parchment. (If you’re making this dish ahead like I was, this is where you would refrigerate until you are almost ready to eat.)

Cover roulade with foil, and bake until hot throughout, about 25 minutes (closer to 35 minutes if it had been refrigerated). Slice into 1-inch-thick slices and serve. 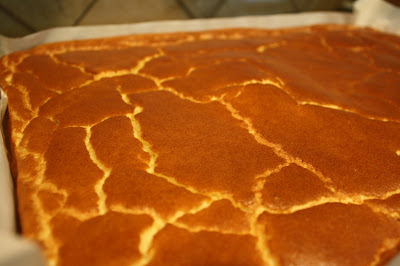 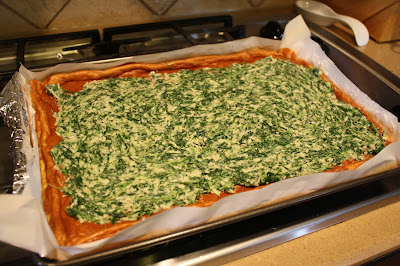 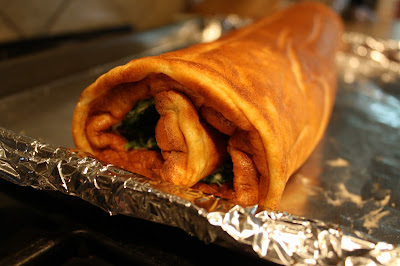 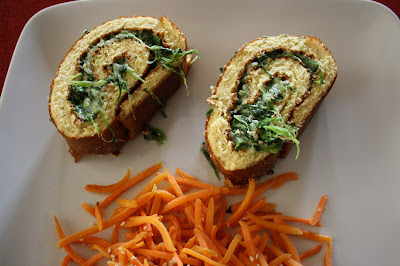