Alright, I’ve got some catching up to do, because I made this before the holidays. This perfect recipe is from Smitten Kitchen, and the only change I made was to use a full vanilla bean instead of half of one. You could also use vanilla bean paste, but please go the extra mile to get either the bean or the paste instead of the plain extract! The only downside is that this recipe makes 6 half-cup servings, but I wished it had been more. I would have eaten 3 or 4 ramekins by myself had I not held back. I’ll consider doubling the recipe next time and serving it in bowls rather than ramekins. Also, the picture is not as nice as I would have wanted, in part because these were going faster than I had thought and I was rushed. I do not like pudding skin, so I put plastic wrap on top of my puddings, but I left the Engineer’s set as is because he likes the skin. I really truly loved these vanilla puddings! 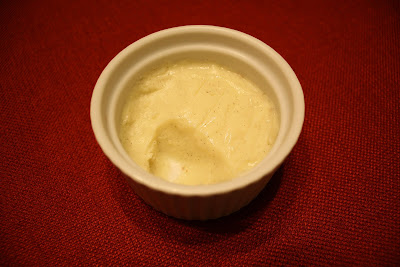 Bring 2 cups of the milk to a boil in a medium saucepan. While it is heating, combine sugar, cornstarch, salt and vanilla bean in the bottom of a medium, heatproof bowl (if you’re replacing it with vanilla bean paste, don’t add it yet; if you’d like to toss the leftover vanilla bean pods in the pot with the simmering milk for an extra vanilla boost, go for it). Gradually whisk in the remaining 2/3 cup whole milk, a little at a time so lumps do not form, then whisk in the egg. Once milk is boiling, very gradually add it to the cornstarch mixture in the bowl, whisking the whole time.

Return the mixture back to the saucepan, stirring constantly with a silicon spatula/whisk (I’m a huge fan of this one) or wooden spoon. Once it comes to a simmer, cook it for one minute longer (which will cook the cornstarch and egg fully). Stir in vanilla bean paste, if you’re using it, and divide pudding among 6 dishes. Chill in refrigerator until fully set, about 2 hours. (If you do not want pudding skin, cover the top of each pudding with plastic wrap.)