After Christmas, I had leftover turkey (obviously), and also some broccoli that I hadn’t used in the slaw. My mother had the brilliant idea to suggest turkey divan, which is what I made. (I’m still not sure where the name of the dish comes from, though, and I’m wondering if it could be a pun on Turkish divan?) I didn’t actually have any recipe bookmarked for that, so for what might be the first time, I looked up a recipe online and ended up with this. I used lactose-free gruyere instead of cheddar, and used one head of broccoli instead of two frozen 10-oz. packages. My first comment is that the dish was good, even the broccoli, as it was barely roasted and definitely not overdone. My second comment is that the dish was missing something. When we had leftovers the second night, I mixed in some cooked brown rice, which unequivocally improved it. Next time, I would double the amount of sauce and add cooked pasta to the casserole before putting it in the oven, because that’s what I think it really needs. The recipe makes about 6 servings. 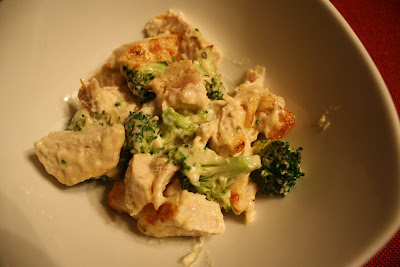 For the casserole
2 packages (10 oz. each) frozen broccoli spears, cooked and drained (I used one head of broccoli, raw)
sliced cooked turkey, about 1 lb., enough for 6 servings
2 Tbsp. grated Parmesan cheese
Cooked grain, perhaps ½ lb., such as pasta or rice (optional, but recommended)

Arrange hot broccoli and turkey in 12” x 8” dish (or bigger if using grain), spooning sauce between layers and on top. Sprinkle with Parmesan cheese. Broil about 4 inches from heat until cheese is browned.