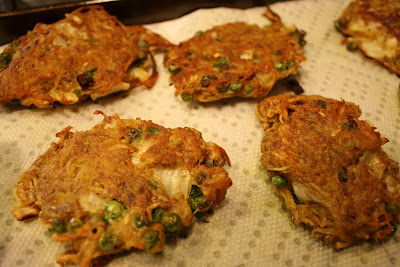 I got this recipe from the blog In Our Grandmothers’ Kitchens, the same place I got the recipe for sweet potato latkes. They were really good! The Engineer laughed when he tasted them, because he felt that the taste really belonged to something else (samosas) rather than latkes. He suggested calling them latkamosas. The flaw with this recipe is that after you make the latkes, you’ll end up with a bowl of peas and onions that just fell out of the mixture. I ended up grating a third potato and throwing in a little flour so that it wouldn’t go to waste, but obviously those were blander. The recipe serves about 6 as a side dish.

Once you’ve grated the potatoes (and again, I recommend the food processor over the grater), wrap the potato shreds in a clean dish towel. Over the sink, wring out as much liquid as you can. Leave the wrapped shreds to drain while you prepare the rest of the ingredients.

In a medium bowl, combine the potato pieces, onion, eggs, flour, ginger, salt and spices. Stir in the peas. In a large frying pan, heat a few tablespoons of the oil until it begins to shimmer.

Scoop some of the potato mixture out of the bowl and flatten it with your hand. Pop the flattened potato into the oil. It should hiss and bubble a bit; if not, wait before you put more pancakes into the oil. (It’s fine if your latkes are a little ragged around the edges. If they don’t hold together and are hard to turn, however, add a little more flour to your batter.)

Fry the potato cakes a few at a time, turning each when the first side becomes golden. Darin the cooked latkes on paper towels, then pop then into a 250 °F oven to stay warm until your have finished cooking all the latkes. When you are ready to serve, sprinkle the chopped cilantro over the latkes. 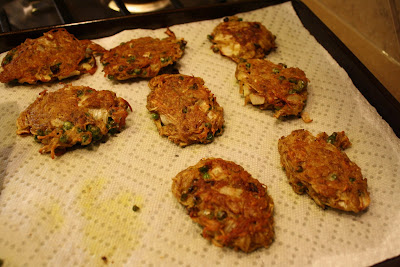