I haven’t talked about natural sodas in a while. I tried Waialua Soda Works in vanilla cream, and I really liked it. The flavours are original and mostly tropical. But obviously, they’re not “healthy”.

My new favourite are sparkling juices. I still call them sodas, because they do contain sparking water, but they’re often sweetened only with fruit. I had talked about Izze before, which I love – especially the blackberry and the pomegranate soda. My recent discovery, though, are the Ocean Spray sparkling juices. I didn’t try their diet versions, since I avoid artificial sweeteners, but I did try the cranberry as well as the pomegranate blueberry; the latter is my favourite. I found it somewhat by accident, as my grocery store was having a promotion for it. It’s in the fruit juice aisle, not in the soda aisle – after all, it does have a full serving of fruits per glass! It’s a great alternative to sweetened sodas. 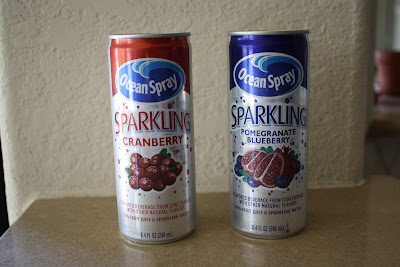 I also tried Mash sodas in lemon peel/ginger root and in ripe mango/blood orange, both of which I found at Central Market. They tasted great, but even though sparkling water is the first ingredient, they were flat (there was the tiniest hint of sparkle, but I don’t think I would have detected it if I hadn’t been looking for it). The expiry date wasn’t until next year, though, so I’m wondering whether this is what they are meant to taste like. In which case, they’re good, but they’re not sodas. 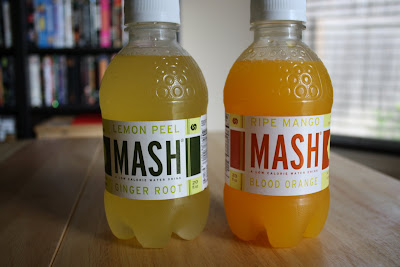 Real Simple recently reviewed fruit sodas (see here. They mention San Pellegrino Aranciata, which is good, as is their lemonade. There’s also Italian sodas, which I love, and Izze. The other one of their picks that I’ve tried is the Blue Sky soda. While I like the taste of it (I tried both the black cherry and the lemon lime), the flaw is that it goes flat very quickly. I never drink the whole can in one sitting, so by the time I get back to it, it’s noticeably less sparkling; it seems that other sodas I have don’t go flat quite so quickly.