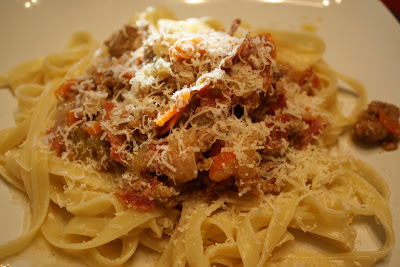 This recipe is from the May 2011 issue of Bon Appétit.  I’ll admit right off the bat that I made changes to the recipe: a thick salami instead of the pancetta (I had a sudden craving for the former and couldn’t find the latter), that I cooked less; 16 oz of 75% lean ground beef instead of 6 oz of 85% lean ground beef and 6 oz ground veal (this is partly because of what was available at the store and partly because of my refusal to buy baby animal meat, so I added a bit of fat to compensate); white wine instead of red (only because I misread that part and only had white on hand that afternoon); probably not quite enough tomato paste (I ran out); 2 cups of broth, with the lid off to simmer (instead of 3 cups, with the lid on, because it looked really liquid). So that’s a lot of changes, yes, but I’m still finding some faults with the recipe. I’m basing this on the image on the Bon Appétit website, which shows me that my assessment is accurate: I was expecting a thick sauce, but the result is really chunks of meat with pasta, with liquid that never  really emulsifies.

I felt like the dish was trying to be a Bolognese sauce, in which case, my grandmother’s recipe beats it. The only edge it had was from the combination of meat and dairy (if you keep kosher, sorry, just pretend I didn’t say that this combination really elevates the dish); however, in that category, I much prefer my spaghetti with meatballs served with the tomato-butter sauce. So I was disappointed, especially given that this is by no means a fast recipe. I prefer pasta with sauce, not pasta with chunks of stuff. That being said, the first night I served it (the ragù on top of the pasta), Engineer really liked it. The second night (the ragù tossed with the pasta this time after they were warmed separately), he upgraded it to awesome.  So I’ll be keeping this recipe for him, and the next time I make it, I’ll make sure to have all the ingredients on hand. That being said, it probably won’t become my favourite pasta dish any time soon. Note that this recipe make about 6 servings (or 4 really generous ones).

Heat oil in a large heavy pot over medium-high heat. Add onions, celery, and carrots. Sauté until soft, 8-10 minutes. Add beef, veal, and pancetta; sauté, breaking up with the back of a spoon, until browned, about 15 minutes. Add wine; boil 1 minute, stirring often and scraping up browned bits. Add 2 ½ cups stock and tomato paste; stir to blend. Reduce heat to very low and gently simmer, stirring occasionally, until flavors meld, 1 ½ hours. Season with salt and pepper.

Bring milk to a simmer in a small saucepan; gradually add to sauce. Cover sauce with lid slightly ajar and simmer over low heat, stirring occasionally, until milk is absorbed, about 45 minutes, adding more stock by ¼-cupfuls to thin if needed.

Bring a large pot of water to a boil. Season with salt; add pasta and cook, stirring occasionally, until 1 minute before al dente. Drain, reserving ½ cup pasta water. Transfer ragù to a large skillet over medium-high heat. Add pasta and toss to coat. Stir in some of the reserved pasta water by tablespoonfuls if sauce seems dry. Divide pasta among warm plates. Serve with Parmesan.