The Engineer and I are finally really settling in. We have closed on the house, so we are now its rightful owners. And all of our things got here from Montreal yesterday morning, so we have a house full of boxes to unpack. A funny thing happened to our furniture, though: some of it is much smaller than we remembered. Is it because it’s in a house as opposed to an apartment, so it seems smaller? Is it that not seeing it for three months warped our memory? Is it because it’s not Texan and therefore not “bigger” like everything else down here? We’re not sure.

We did finally get a big fridge, though. We had done a lot of research and had decided to buy a stainless steel Kenmore Elite, which has water and ice dispensers that don’t take up ANY room in the fridge itself. Brilliant, no? So we make our purchase on September 22nd, which is to say as soon as we knew when we would be getting the keys to the house, and we ask for a September 24th delivery. At that point, we find out that it can’t be delivered until early November! We decide to settle for the ultra satin, which has the look of stainless steel and is easier to clean. That one can be delivered on October 8th – less than ideal, but much better than November. We end up buying a little fridge to tide us over until then, figuring we can put it in the garage later and use it to store drinks when we have guests staying with us. It looked ridiculous in the spot we had for it, though! 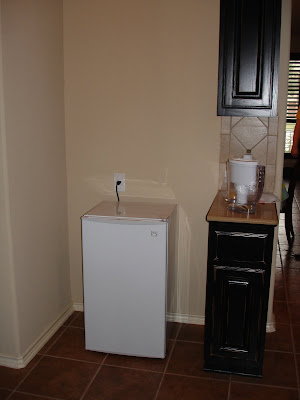 The day before the scheduled delivery, Sears called to tell us that the fridge was still on backorder and wouldn’t be delivered until October 24th. Our heads imploded. I mean, this is Sears’s own brand, so how can they be so low on stock? After much deliberation, we decided to politely tell Sears where they could put their fridge. We ended up getting a Samsung – the reason we hadn’t bought that one to begin with is that it’s much more expensive than the Kenmore, but it was on sale that day, and with the additional rebate Sears gave us to compensate us for our trouble, it was very reasonable, so we went for it. Even though the water dispenser takes up space in the fridge, it’s not THAT much of an issue (though I did prefer the door racks of the Kenmore). Next-day delivery was no problem. And it looks much better in that space! 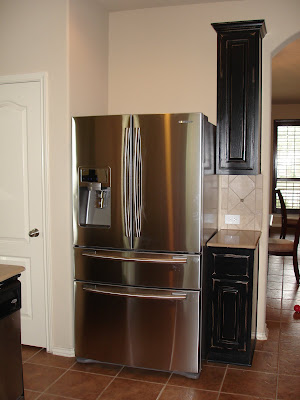 So the first room we unpacked was the kitchen. That’s because it’s the room we use the most often, so if piles of boxes prevent us from accessing the sink, stovetop or fridge, we’re not happy campers. It is so nice to have all my things back! I’m looking forward to using the stand mixer again, and the ice cream maker, and our knives and the serving dishes... The pantry is already full (that’ll be my next organization project), and most things have been put away, though there are still some items cluttering a countertop for the moment. But all the boxes there are gone, except the ones containing cookbooks, because we don’t yet have a bookcase for that.

The problem with the bookcase is twofold: I’m picky, and our car is small. I had my heart set on a red bookcase from Ikea, but the package doesn’t fit in our car, so it would have to be delivered. However, the Ikea is in Austin, not San Antonio. For this $60 bookcase, the delivery charge is $350! Needless to say that won’t be happening. The bookcase needs to be relatively tall and narrow. We’ve been to every store we can think of here, but I didn’t like anything I saw (I’m pickier than the Engineer, I admit it). We also went to the Goodwill store and the Salvation Army (the latter had some great stuff, actually, but not what we were looking for), as well as a massive neighbourhood-wide yard sale. No luck yet, but I’ll keep you posted.

We’re also still looking for a good storage solution for the shower. While the Engineer is fine with just a bar of soap and a bottle of shampoo, I have at least shampoo and conditioner (plus usually a 2-in-1 for when I’m in a hurry), soap, razor, perhaps some shaving gel or body wash, face wash, body scrub... We tried a shower caddy, but we are adamant that we want a showerhead with a hose attachment, so that didn’t work. I then tried a corner tray with suction cups, but they didn’t stick to our tile! And since the ceiling over the shower is slanted, we can’t install a pole with trays on it (not that there’s enough space in that shower anyway). Does anyone have any ideas for me? Also, does anyone know of a good way to shave one’s legs in a phonebooth-sized space? 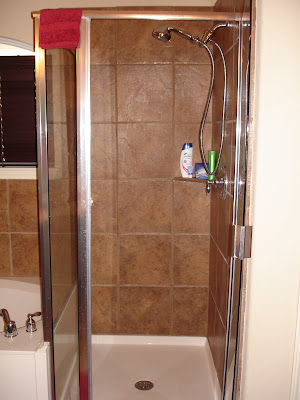 Today, I unpacked all my clothes and shoes. While I am thrilled at having something “new” after three months of wearing the same damn things all the time, I’ve been hit by a stark realization. Two, actually. First, while I appear to have more space than I’ve ever had with a new “grown-up” dresser and a walk-in closet, there is actually less storage in there than I had in Montreal (the dresser definitely has less storage, and the closet looks great but is poorly planned, or at least not adapted to our height and the length of our clothes). So I officially have too many clothes now, despite massive culling and donating before the move. Second, I now see that the clothes I do have are mostly clothes I don’t like. I have a lot of things that are too warm (we’re told it’ll get cold in the winter and we’ll need them, but it’s hard to believe that right now), but mostly a lot of things in which I don’t feel good: most of my clothes are excessively casual, and my tastes have changed. My problem is that I get emotionally attached to things, so it’s hard for me to get rid of them. I do have a plan, though; more on that in a later post.
Posted by Amélie at 6:02 PM