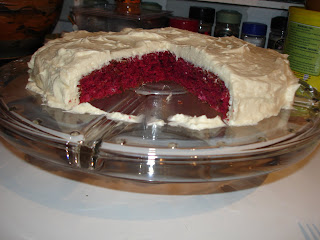 I found this amazing recipe on Velvet Lava Cafe. It is referred to as Utterly Ridiculous Cake – and yes, it is that good. Dare I say it? This cake is better than the one I had as my wedding cake (which the baker made with my recipe). But what really makes this cake is the frosting. I’ve never had anything like it. Yes, it is a little... shall we say... high-maintenance, but it is well worth it! And part of its appeal is that it is not as sweet as one would expect by looking at it. So this will now be my go-to Red Velvet Cake recipe. (As for my second wedding cake, the so-called “Free Cake”, that recipe still stands and will be shared here eventually.)

Before we begin, one word about ingredients. I did make the cake lactose-free (that is, if using the right kind of margarine and by replacing the buttermilk with lactose-free milk and lemon juice). But then, I tried to substitute ingredients for the frosting, with disastrous results. You see, the frosting calls for shortening and butter. On the first night, I substituted (non-hydrogenated) margarine for both – luckily, I did not double the recipe, simply because I did not have enough margarine. While it could probably replace the butter without too much trouble, it turns out there is no way it could replace the shortening. The consistency is just too different. The frosting made with margarine was too liquid, and no amount of butter and icing sugar could salvage it. The cake itself was still delicious, and we used some of the icing mixture as a sauce. On the second night, the Engineer having kindly gone to the store to get shortening (which we don’t keep in the house, normally), I made another batch of frosting for the leftover cake – and boy, was it awesome. It came out floofy and perfect. I do suggest making a double batch for frosting the whole cake. If you only do a thin layer of frosting, you could probably get away with a single batch, but really, with this recipe, you should go all the way! Double-batch it and you’ll have some leftovers.

So my dilemma is this: is there a product that is, if not healthy, at least healthier than shortening? I know it’s vegetal, but it’s all hydrogenated fat! And they make it yellow now, which is just weird. I’ve recently read a very interesting article on lard that makes me want to try it, but I haven’t seen it at my grocery store yet. What are you views on these types of ingredients? Any suggestions for me?

Batter
In a small bowl, combine cocoa and food coloring, making a runny paste; set aside. Using a mixer, cream margarine and sugar until combined. Add eggs one at a time, beating after each addition. Beat until combined and fluffy, about 3 minutes. Add the red paste and beat until completely incorporated. 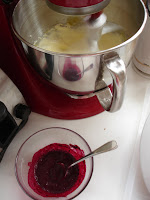 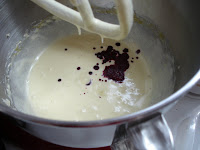 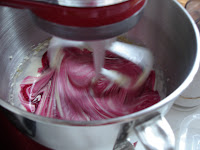 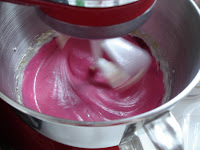 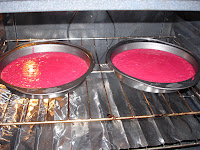 Bake for 35-40 minutes, or until tester inserted into middle of cakes comes out clean. Place cakes on cooling rack to cool, then remove from pans. Frost once completely cooled. 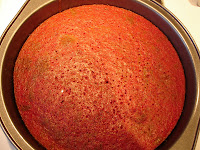 Frosting
Prepare a cooling bath. Fill a sink or large, wide container/pan with ice water; have a medium bowl ready to cool the flour mixture. In medium saucepan, over medium heat, add milk and flour, stirring occasionally at first and then almost constantly as the mixture begins to warm and thicken. Attentive stirring will prevent lumps from forming while the flour and milk begin to combine. The mixture will continue to thicken; bring the consistency just past pudding stage, where it begins to get a bit gummy. Take the mixture off the heat and pour into the waiting medium bowl. Stir vigorously and place bottom of bowl into cooling bath to speed cooling, stirring every few minutes to avoid big lumps, until the mixture cools. 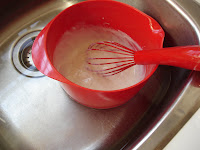 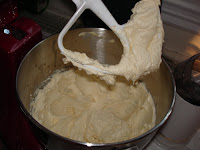 When the cake has completely cooled, frost it to your heart's desire!


*Update*
I made this for the Engineer's birthday (Aug. 2009), so here are a few pictures that are more representative. Pardon the smooshing effect on the cake! 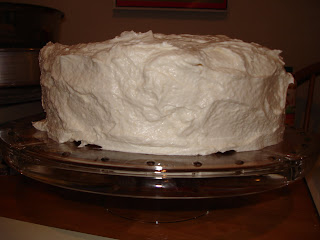 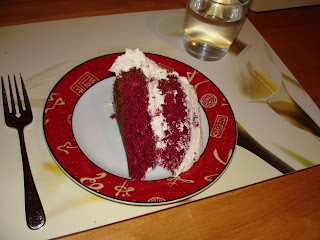 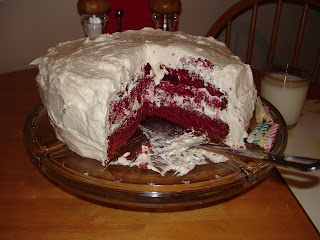 Oh my... just looking at it again makes me hungry for more. You people out there have no idea how good this is.

I'm gald to know I'm not the only one who had these cravings just from the picture! I'm just looking for an excuse to make it again...

Can I halve this recipe?

Absolutely! I don't foresee any difficulties halving the cake recipe to get only one cake. I would make the frosting as it is written, though, and without substitutions (use shortening and butter); you may have a little left over, but I think that if you halve the frosting recipe, you won't have enough or it won't mix properly.

In fact, this may be the only reasonable way two adults can have this cake. I haven't made it in a long time because I'd need other people to eat it with! Halving the recipe sounds like a perfect plan.

In spite of the fact that individuals think just about Red Velvet Cakes however there were numerous kinds of velvet cakes which were made accessible during the mid 1800s. red velvet cake