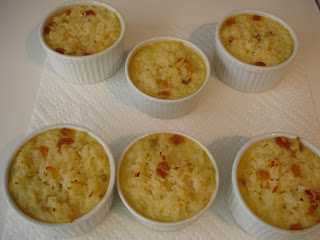 Anglophone Montrealers probably know about Murray’s, a diner whose main claim to fame seems to be its rice pudding. Everyone talks about it nostalgically – there is only one location of Murray’s still open, and people just don’t seem to go as often anymore. A woman who was a waitress at Murray’s for something like 30 years kindly posted the rice pudding recipe on Chow, at the request of several members. I made it, and the Engineer loved it. He said it was pretty much as he remembered. I, on the other hand, was a little confused by this dessert, because it is completely different from my mother’s rice pudding, so it really wasn’t what I was expecting. I’ll post her recipe eventually, but for now, I’ll give you Murray’s.

4 cups of cooked short-grained rice (I used jasmine)
2 to 3 cups of milk (I’ll explain in a moment)
½ cup of sugar
3 eggs
½ cup of 15% cream (I put lactase drops in mine, hence the lactose-free tag)
½ tsp of vanilla
½ cup raisins

Put the cooked rice in an 8-inch pan with the sugar and add enough milk to just cover the rice (in my case, that was 2 cups). Cover the pan with paper (preferably parchment, or wax if you don’t have anything else) that has been cut to fit just over it. Place the pan in the oven and bake until the top browns slightly, about 30 minutes.

Beat the eggs and add the cream, vanilla, rice, raisins and enough extra milk so that the mixture is fairly loose. (Here, I felt the mixture was loose already, so I didn’t add any more milk. That being said, the Engineer felt that my pudding was slightly harder than Murray’s, so maybe a little more milk would have helped. Also, the recipe is supposed to make about 8 servings, while I only had 6 – so yes, more milk than 2 cups would be preferable.)

Spoon the mixture in small ramekins. Place the ramekins in a large pan filled with boiling water (this will help the custard bake evenly). Put the pan in the oven and bake uncovered until the custard has set and the pudding is golden brown, about 30 minutes. Chill and serve.
Posted by Amélie at 9:07 AM